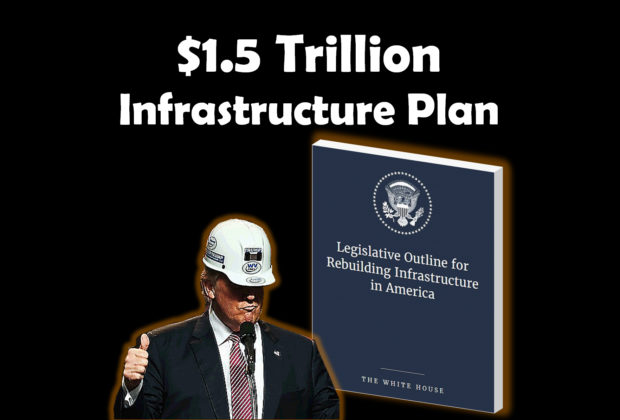 On 12 February 2018, President Trump presented a 53-Page legislative outline to Congress entitled “Legislative Outline for Rebuilding Infrastructure in America.”   Apart from four Jobenomics suggestions, the Whitehouse’s infrastructure outline is the best business and job creation plan coming out of Washington that Jobenomics has reviewed in recent years.

The unique aspect of the Legislative Outline (the Infrastructure Plan, or the Plan) is that it is more like a business plan than a typical legislative document. Traditional legislative infrastructure-related programs often throw massive amounts of money at loosely-defined, shovel-ready programs.  The President’s Plan takes a system-of-systems approach to upgrading the entire infrastructure ecosystem from fixing what’s broken, to modernizing, to streamlining the regulatory process, to workforce development.

The Plan is bold in scope but frugal in implementation.  Over a 10-year period, $1.5 trillion worth of infrastructure development is envisioned, with only $200 billion (13% of the total) funding coming federal coffers.  This “leveraging” is akin to the principle used by the banking system that leverages $1 in financial assets to generate $10 in loans.  In the commercial world, real estate moguls—like President Trump—are experts in another leveraging principle called OPM.  OPM stands for using “other people money” to finance big deals like the one that the Administration is proposing for infrastructure renewal.

Via leveraging, the Plan also advocates disposition of underutilized government assets to help finance a wide variety of infrastructure programs.  Given the entrepreneurial nature of the Plan, leveraging the Federal Government’s vast wealth could even pay for the $200 billion over time.  The land value of federal land is worth an estimated $3 trillion according to the Bureau of Economic Analysis.  The oil, mineral, aviation, tourism, grazing, and rights-of-way rights are worth trillions more.  States and cities have similar assets.  For example, the City of Baltimore owns 17,000 vacant and boarded structures—potential collateral for urban renewal and infrastructure projects if underwritten by this Plan.

Underwriting public-private partnerships with federal assets is not a new concept.  In fact, the $200 billion down payment is trivial in comparison to existing federal underwriting programs.  In 2008, the U.S. government established the Federal Housing Finance Agency (FHFA) to oversee financing operations of Fannie Mae, Freddie Mac, and the Federal Home Loan Bank System.  Today, FHFA provides “more than more than $5.9 trillion in funding for the U.S. mortgage markets and financial institutions.”  If the federal government can do this for homeowners, it can surely do it for people who rely on a viable infrastructure to live, work and play.

Part 1 of the Plan outlines infrastructure improvements in the following domains;

Part 3 focuses on streamlining permitting processes starting with the federal government and delegating greater decision-making responsibility to state and local governments.  At the national level, the Plan calls for establishing a “One Agency, One Decision” structure to break down multiple stove-pipes across the numerous government agencies.  The combination a central federal clearinghouse and more local authority should streamline environmental and permitting decisions where the problems exist.  Streamlining also includes the creation of highly-scalable and repeatable pilot programs.  An essential element in Part 3 involves judicial reform to avoid protracted litigation and exempt commonplace issues from prosecution.

Part 4 is dedicated to workforce development and helping working Americans secure stable, well-paying jobs.  The Plan calls for using Pell Grants (money the government provides for students who need it to pay for college) to pay for short-term, skill-based training and certification programs.  The Plan wants to motivate secondary schools to provide career and technical education that “teaches them practical knowledge and skills needed in today’s technology-driven economy.”  Part 4 also includes the reformation of out-of-State skilled trade restrictions and prohibitive licensing.

Jobenomics recommend four additional areas that the U.S. Congress should consider in enacting the Administration’s Plan:

The President’s $1.5 trillion Legislative Outline for Rebuilding Infrastructure in America could be the catalyst for millions of new jobs and mass-producing tens of thousands of startup businesses.  Once established, these new workers and businesses could engage in other related national-level initiatives, such as urban renewal and restoration of blighted communities.

Not surprisingly, the Plan is more of a construction plan than an economic, community, small business and labor force development plan.   Construction jobs are often temporary.  However, temporary construction jobs are a significant first step in a lifelong applied (as applied to a specific career field) learning processes to “retool” the thirteen million unemployed and underemployed Americans to fill the six million open U.S. jobs.

As reported by highly-respected business publications, the majority of big companies intend to deploy most of their newfound wealth on mergers, acquisitions, stock buybacks, dividends and investing in secondary markets.  From a corporate and shareholder standpoint, implementing profits internally and making money on money is a prudent use of capital.  From a U.S. economic growth perspective, the TCJA intended for most of the newfound earnings to be used for job creation, as implied by the use of the term “Jobs Act.”

As “corporate citizens,” big business must concern themselves with social well-being and community development.  Corporate citizenship, also known as corporate conscience or corporate social responsibility, is a concept that promotes the health and welfare of society, communities, small businesses, the workforce and the environment.  The Plan presents an ideal way for major corporations to give back to local communities while still making a profit on their public-private partnership investments.

Today’s big businesses are immensely powerful—often more powerful than the nation and communities that they ostensibly serve.  Apple, the most prosperous company in the world, serves as a good example.  If Apple were a country, it would rank 17th out 198 countries.  As of this writing, Apple has a market capitalization value of $826 billion.  If Apple were a state, its economic power would be higher than 47 out of 50 states in America.  In January 2018, Apple pledged to spend $350 billion in the United States.  When (not if) enacted by Congress, the Plan gives the Administration the wherewithal to make “really big deals” with companies like Apple and other private sector developers, investors and pension funds.

Apple and the other platform giants (e.g., Facebook, Google, Amazon, and Microsoft) specialize in digital and network technology.  By developing a national low-cost, high-speed, broadband infrastructure to every home and office in America, these companies and their content and internet provider cousins (e.g., Comcast, the largest broadband company in the U.S.) could help create hundreds of thousands of self-employed, contingent workforce, microbusiness. In turn, these microbusinesses could compete in the emerging digital economy (e.g., e-commerce, mobile-commerce, on-demand and shared economies) that is estimated to grow to the size of the traditional economy in the next several decades.  Also, many of these companies are investing heavily in smart transportation, such as autonomous vehicles and remote sensors, which would fit nicely into an intelligent infrastructure program.  For more information on President Trump’s New Economy Challenge download the free 126-page Jobenomics e-book.

In conclusion, Jobenomics enthusiastically supports President Trump’s Legislative Outline for Rebuilding Infrastructure in America and encourages a unified, bipartisan U.S. Congress to enact a bold infrastructure ecosystem renewal and modernization program.  Jobenomics also helps corporate America to join the deliberations to suggest ways for the legislation to entice greater participation from major corporate and financial institutions in the public-partnership process.  This Plan represents a viable method for the Administration and Congress to create 25 million new jobs and sustainable 4% GDP growth over the next decade.

This blog and President Trump’s 53-Page Legislative Outline for Rebuilding Infrastructure in America can be downloaded free from the Jobenomics Library.