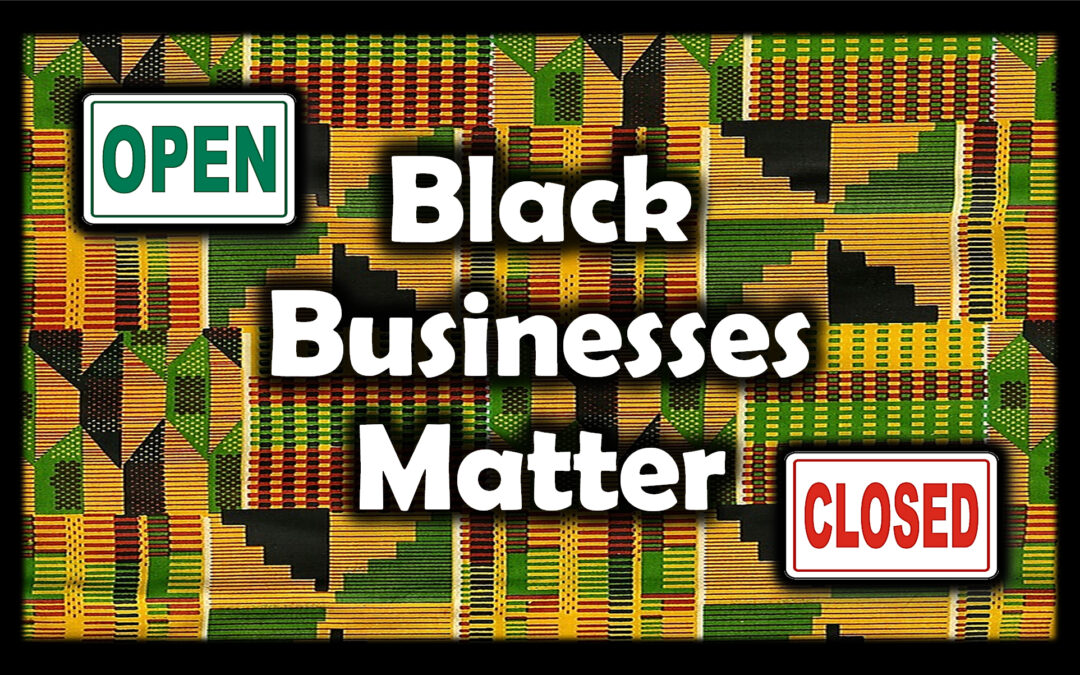 My ancestors were slaves.  I am not ashamed of that because that didn’t deter my family from pursuing the American Dream with their freedom.  Neither did it make us distrust democracy, capitalism, or the rule of law.  We viewed these institutions as rungs on a ladder to equality.  As Dr. Martin Luther King wisely said, all African Americans genuinely want is to “be treated with dignity and given a fair shot at life, liberty and the pursuit of happiness, just like everybody else.”

In today’s America, a fair shot entails having the opportunity to prosper economically and socially from our labor.  Hence black businesses matter since they are the engine of the economy for underserved and under-resourced African American communities.

Today’s racial justice conversations are long overdue.  Black families had been slowly making progress.  Unemployment was near historic lows for African Americans.  But the murder of George Floyd at the hands of police officers struck an open nerve, producing a visceral outcry like none in our lifetimes.

Two forces surfaced: a Black Lives Matter movement and the Black Lives Matter organization.  The movement is raw and organic, born of genuine exasperation and frustration, and focused on justice.  The organization is a strident left-wing political agenda wrapped in the language of the newly “woke.” It’s critically important that the two forces be separated.

The movement is the primary slogan that most well-meaning people flash when they want to identify with the struggle. It’s the campaign that we see on t-shirts and hats and lawn signs.  This campaign reminds us there is a lot of work necessary to achieve racial harmony in the United States.

According to a June 2020 Pew Research Center poll, 67% of American adults say they support the movement out of concern for African Americans and aversion to the graphic video of George Floyd’s arrest.  On the other hand, 60% of U.S. adults believe that criminals and radical organizations exploit Floyd’s passing for personal gain or anti-establishment reasons.[1]

Following the acquittal of by George Zimmerman (a Hispanic-American) of the shooting death of Trayvon Martin in 2013, the Black Lives Matter Global Network (the organization) was founded.   According to their website, the BLM Global Network’s mission is to “eradicate white supremacy and build local power to intervene in violence inflicted on Black communities by the state and vigilantes.”[2]  Thus, this mission statement sanctions violent interventions to remedy perceived Black inequities and injustices.

As a pastor and Executive Director of the Philadelphia Council of Clergy, I believe that violence begets violence, which is now happening in the name of Black Lives Matter.  Hitchhikers, extremists, and anarchists—of all stripes and colors—are cynically expropriating African American angst to commit violence and wide-scale theft in the name of Black Lives Matter.  As an African American, I am sickened by these despicable actions.  Breaking into a department store or throwing objects at police officers is not a protest against racial injustice; it’s criminality.

If the BLM Global Network wants to be part of the racial healing process, it must renounce looting and violence.  It must separate itself from anti-American dogmas.  Undermining the rule of law is counter to everything we stand for.

On a positive note, the BLM Global Network website states that it is “committed to struggling together and to imagining and creating a world free of anti-Blackness, where every Black person has the social, economic, and political power to thrive.”[3]  Now, this is a statement with which I totally agree. 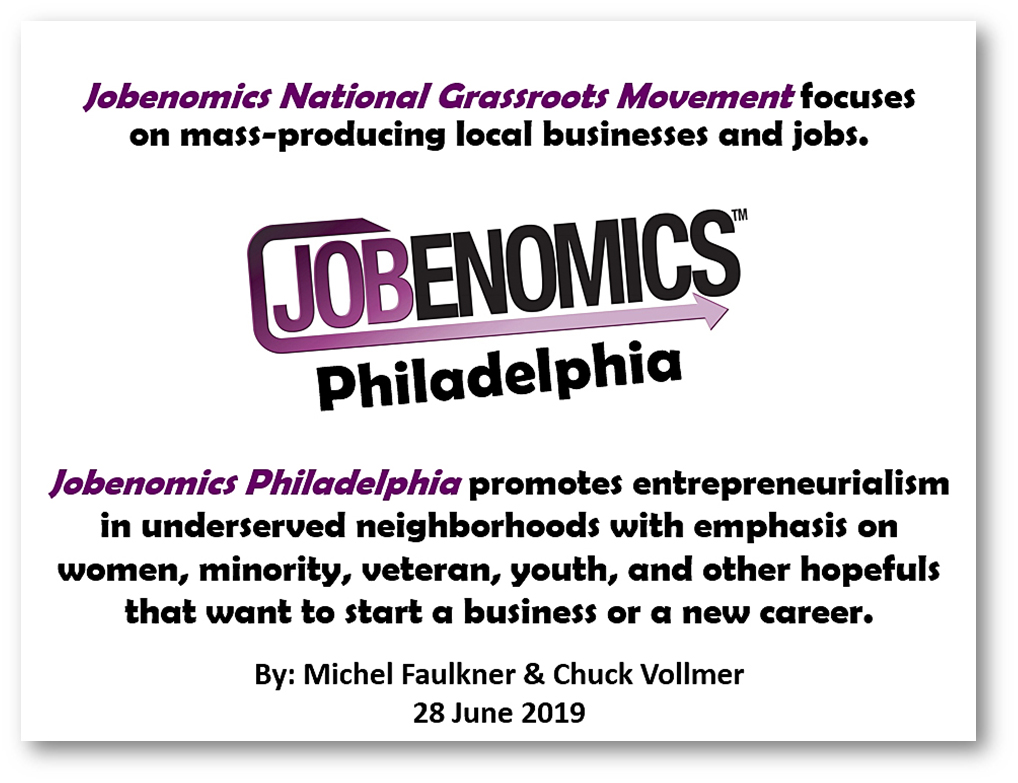 Social, economic, and political parity underpinned my 2017 campaign for Mayor of New York City.  These qualities are foundational to my duties/mission/ministry as a charter member of the Jobenomics National Grassroots Movement[4] and Managing Director of the Jobenomics Philadelphia program.  Jobenomics Philadelphia is a comprehensive program that promotes entrepreneurialism in underserved Philly neighborhoods with an emphasis on women, minority, veteran, youth, and other hopefuls that want to start a business or a new career.[5]

In the aftermath of the 2008-2009 Great Recession, a visionary entrepreneur and former fighter pilot founded the Jobenomics National Grassroots Movement to mass-produce startup businesses and jobs in underserved and under-resourced communities.   Since its inception, this Grassroots Movement established three dozen city and regional chapters across the United States as well as Canada, South America, Africa, and the Middle East.  As a result of today’s pandemic-induced global recession, Jobenomics’ bottom-up approach to economic, community, small business, workforce development is needed by financially distressed communities more than ever. 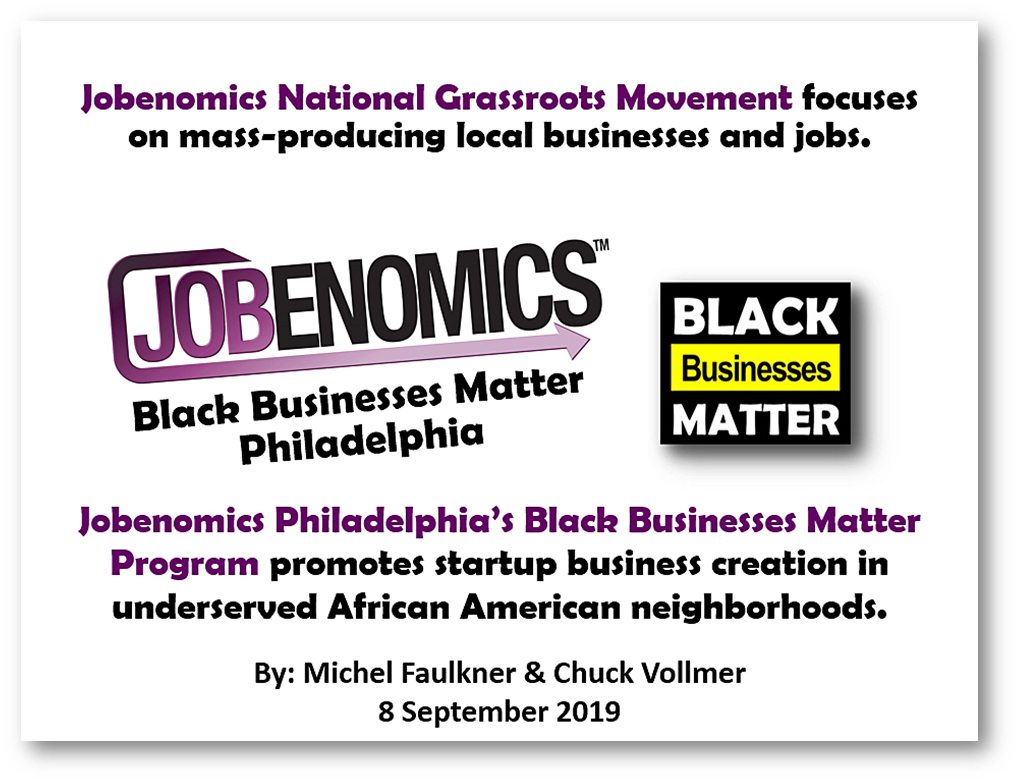 Jobenomics Philadelphia’s Black Businesses Matter Program promotes startup business creation in underserved African American neighborhoods.[6]  Promoting black business-ownership is paramount since many of the shuttered white-owned micro businesses will never return as whites are fleeing violence-prone areas for safer suburbs.  Out of a population that is 43% black, Philadelphia’s business ownership is a shockingly low 2.5%.  Business ownership is directly proportional to reducing crime and the racial wealth gap in black communities.  Each 1% of startup business growth reduces crime and poverty by 2%.

Everyone that believes that black communities need more robust economics should join our Black Businesses Matter initiative.  Jobenomics offers a fresh perspective on reinvestment in communities devastated by poverty.  The Coronavirus Aid, Relief, and Economic Security (CARES) Act allocated over $2 trillion worth aid to struggling communities, including $377 billion for small businesses and $340 billion for state and local governments.

Given the fact that the coronavirus hammered Black urban neighborhoods harder than other communities, the Jobenomics Philadelphia’s Black Businesses Matter Program offers over a dozen turnkey programs that can create thousands of black-owned and operated startup micro and nonemployer businesses within a year.   These startup programs are likely to be successful in attracting investment dollars, eliminating social injustice, gaining financial self-sufficiency, and restoring the American dream in beleaguered neighborhoods.

Growing up in Washington, D.C., he was an all-star football player that became a freshman All-American and four-year starter at Virginia Tech., graduating in 1980.  After college, Rev. Faulkner played two seasons in the National Football League (NY Jets).  In 1983, upon completing his Master’s degree, he became the Assistant Dean of Students at Liberty University.

In 1988, Rev. Faulkner and his family moved to New York City, serving as co-chairman for the New York City Board of Education’s HIV/ AIDS Task Force from 1991-1994 and VP for Community Government Relations at King’s College from 1998 to 2002.  Following these assignments, the Mayor of NYC recruited him to serve on NYC’s Task Force on Police-Community Relations and later assume the role of Commissioner for the City Charter Revision.

In 2005, Rev. Faulkner founded the Institute for Leadership to develop leaders and bring scalable solutions to difficult community problems.  In June 2006, he founded the New Horizon Church of New York in Harlem for the economically and socially disadvantaged.

Over the last several decades, Reverend Faulkner has been a frequent commentator for numerous national and local media outlets, including CNN, FOX News, and MSNBC.

Jobenomics focuses on mass-producing local startup businesses and sustainable jobs with an emphasis on underserved and under-resourced populations.  The Jobenomics National Grassroots Movement has reached an estimated audience of 30 million people via national media, Jobenomics TV, website, blog, and lectures.  The Jobenomics website averages over 30,000 page views per month, with the majority of the viewers spending a half hour or more online.  As a result of this exposure, Jobenomics’ unique economic, community, business, and workforce development activities gained national recognition.  Over two dozen cities and regions in the United States, Canada, Africa, South America, and the Middle East implemented Jobenomics chapters.  To meet the immediate needs of local citizens, Jobenomics formed partnerships with leading companies and institutions to create a wide variety of highly-scalable startup programs that could quickly mass-produce new locally-owned and operated startup businesses.  For more information, see Jobenomics.com.