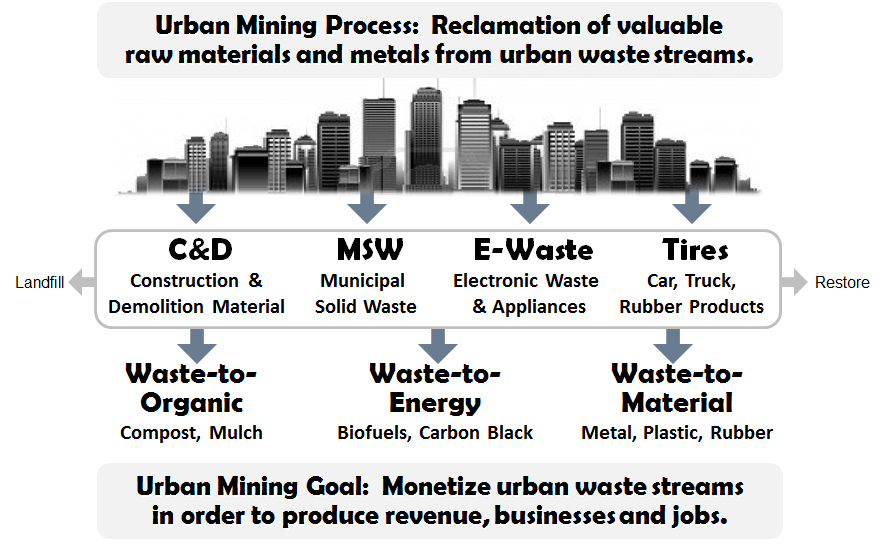 Urban mining is defined as a process of reclaiming raw materials and metals from municipal waste streams including construction and demolition material (C&D), municipal solid waste (MSW), electronic waste (e-waste) and tires.  These waste streams contain combustible and non-combustible materials.  Combustibles are the carbon-based matter that has a caloric value that can be converted to marketable products via waste-to-organic and energy via waste-to-energy technologies.  Non-combustible elements can be reclaimed via waste-to-material technology.   Every U.S. community should consider urban mining to (1) reclaim valuable raw materials and metals, (2) reduce landfilling and exporting of toxic waste, (3) mitigate environmental pollution associated with traditional surface and subsurface mining operations, and (4) produce revenue for local business and job creation.

Approximately two-thirds of U.S. MSW can be composted. Composting is a managed system that uses microbial activity to degrade biological waste so that the end-product is relatively stable, reduced in quantity from the original feedstock, and free from offensive odors.  Compost is widely used as a soil amendment to improve soil structure, provide plant nutrients, conserve water, sequester carbon, and facilitate revegetation of disturbed or eroded soil.  In the U.S., 28% of all cropland is eroding above soil tolerance rates, resulting in diminished agricultural yields.  Composting offers up to four times more business and job creation opportunities than landfilling or incineration.  For every million tons of MSW composted, 1,400 jobs can be created.   Mulch is closely related to compost and used as a surface covering to retain moisture, contain weeds and make landscaping more attractive.

Waste-to-Energy.  Waste-to-energy facilities use incineration, pyrolysis, plasma or gasification to convert organic waste into biofuels that can be used to generate electricity or produce synthetic gas, oil, tars, and other marketable products.  Incineration (burning) is the oldest and most common process, but is generally considered the dirtiest.  However, modern incinerators are more efficient and cleaner burning.   Pyrolysis burns waste material in an oxygen-free environment, producing carbon black (a commodity used in paints and toner cartridges), and synthetic fuels and substances.   Pyrolysis is becoming increasingly popular but produces lots of ash and is often expensive.   Plasma, which is essentially lightning in a bottle, is the most modern but yet unproven.  Due to its ultra-high temperature, plasma is ideally suited for eliminating toxic waste including nuclear waste.  Gasification is considered to be the cleanest and most cost-effective waste-to-energy system that mainly produces synthetic gas as an end-product.  Gasification is in use in over ten countries. A typical waste-to-energy plant employs several hundred people.

Waste-to-Material.  Waste-to-material facilities reclaim non-organic elements and metals from MSW, C&D, e-waste, and tires.  Advanced technology material recovery facilities can produce over $30 million worth of annual profits and hundreds of jobs for a medium-sized city.  Unfortunately, most city managers do not realize that they forego this source of revenue by landfilling or exporting items that contain high-value materials, such as precious metals, common metals, and plastic and rubber products.

The EPA calculates that 75% of all U.S. consumer electronics and computer-related waste is landfilled and 25% is recycled.   Of the 25% recycled, 80% is exported to countries where extraction processes are often unregulated and unsafe.  Consumer electronics and computer-related waste grew by 120% in the last decade and is forecast to exceed this growth rate in the next decade largely due to the advent of mobile phones, flat panel displays, and cloud computing.  Worldwide, 2 billion PCs are currently in operation will be soon ready for end-of-life management. In the United States, over one billion (6 million tons of which two-thirds are toxic due to lead content) TV and computer monitors with cathode ray tubes are now ready for end-of-life disposal. Americans also dispose of an untold amount of other e-waste related materials such as 8 million vending machines; tens of millions of stoves, dishwashers, HVAC systems, water heaters, ducting, wiring, and light fixtures; and tens of millions of tons of industrial scrap metals and plastics that can be reclaimed by waste-to-material plants.  National disasters produce vast stockpiles of non-organic elements and metals.

Americans discard 300 million scrap tires per year.   Scrap tire markets include tire-derived fuel, ground rubber, aggregates, and exports.  The primary means of disposal of scrap tires is tire-derived fuel due to their high heating value.  The typical selling price for tire-derived fuel is approximately $50/ton.  Ground rubber mulch, pellets and powders sell for between $300/ton and $8,000/ton for ultra-fine and pure mesh.  Pyrolysis of waste tires generates combustible gases, oil, and char products.  Approximately 25% of a scrap tire consists of steel that currently sells for $250/ton.

[1] EPA, Electronics Waste Management in the United States Through 2009, published May 2011, http://www.epa.gov/osw/conserve/materials/ecycling/docs/summarybaselinereport2011.pdf