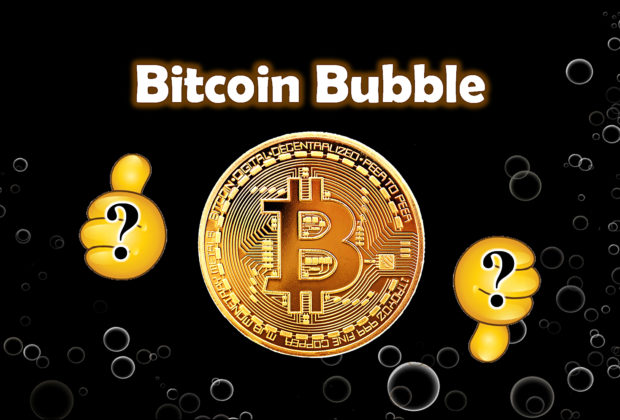 The cryptocurrency market bubble is likely to burst causing Bitcoin and the other 1,354 traded cryptocurrencies to crash.  (Download this blog.)

Bitcoin is a new kind of money.  It’s the first decentralized, unregulated, peer-to-peer, encrypted electronic currency not controlled by a single organization or government.  Bitcoin is designed to replace traditional institutions like commercial banks, financial regulators, and central banks via a “public ledger”.  Bitcoin, spelled with a capitated “B”, usually refers to the public ledger (i.e., database), whereas bitcoin with a lowercase “b” refers to the currency.

Bitcoin is not a coin, rather it is a token or certificate that is traded via the internet in thousands of markets.  The ledger allows only 21 million bitcoins to be produced (as 14 December 2017 16,740,637 bitcoins have been produced) to resist the temptation of producing additional coins to reduce the value of the currency or manipulate markets for monetary (inflation of employment) or political reasons, which is being done by central banks around the world.  Consequently, Bitcoin is politically decentralized but globally centralized by an encrypted database (public ledger) that cannot be changed, erased, copied, or forged, which in turn should reduce manipulation or cheating (assuming that the encryption protocol is secure enough not to be hacked).

In the beginning, when Bitcoin prices were low, people entered this marketplace via “mining” rather than buying Bitcoins.  Miners are rewarded by a single bitcoin for developing and bundling bitcoin transactions into a “block” that is added to a “chain” of former blocks.  This chain of custody is known as blockchain.  Part of the miners’ duty is to confirm daily transactions and write them into the database.

In the 2013-2015 timeframe, when cryptocurrencies were in their frontier stage, many people took up mining via a reasonably powerful and well equipped personal computer.  Today, running a home “mining farm operation” has become much more complex without investing substantial amounts of time and money on specialized mining equipment as well as the electrical power needed to adding and verifying a new block within the blockchain of 16.7 million blocks.  According to Digiconomist, daily bitcoin transactions (about 1 million transactions per day) consume 32.7 trillion watt-hours of electricity, which is equivalent to the power consumption of many countries

Due to today’s high cost of mining, the preferred way to enter the market is by purchasing bitcoins (or a fraction of a bitcoin) through an exchange.  According to Investopedia, in the U.S., the most popular avenues are CoinBase, Bitstamp, and Local Bitcoins.

This graphic was developed using 14 December 2017 data from CoinMarketCap.com.

Skyrocketing BTC value is creating tremendous media interest and a California gold rush-like investor stampede.  Though the upswings are obvious in the graph, BTC lost more than 80% of its value between December 2013 and January 2015.  More recently, BTC plummeted 27% over a 4-day period in November 2017 and 7% 1-day drop in December 2017.  Consequently, investing in bitcoins today is a risky speculation, since many pundits believe that the cryptocurrency market “bubble” is about to break.

The value of a bitcoin determined depends on people’s confidence in the currency as it is not backed by physical assets or run by any person or group.  Since a bitcoin is backed by $0 worth of assets, today’s extraordinary price certainly qualifies as a bubble.  Moreover, while bitcoin has been gaining acceptance by the general public and investment community but has yet to become an accepted form of payment on the websites of major retailers such as Amazon.com.  If rampant rumors about Amazon accepting bitcoin materialize, BTC’s market value could appreciate significantly.

On the other hand, Amazon seems to be more interested in promoting an Amazon-backed cryptocurrency, which would likely crater BTC.  Three years ago, Amazon registered amazonbitcoin.com that redirects to the amazon.com site.  In addition, Amazon’s legal department is listed as the registrant for the .com domains: amazonethereum, amazoncryptocurrency, and amazoncryptocurrencies.

When a well-respected company like Amazon, with a large customer based serviced by a proven payment system, enters the current cryptocurrency market bubble is likely to burst, driving many of the 1,355 existing bitcoin cryptocurrencies out of the market.

About Jobenomics:  Jobenomics deals with the economics of business and job creation.  The non-partisan Jobenomics National Grassroots Movement’s goal is to facilitate an environment that will create 20 million net new middle-class U.S. jobs within a decade.  The Movement has a following of an estimated 20 million people.  The Jobenomics website contains numerous books and material on how to mass-produce small business and jobs as well as valuable material on economic and business trends. For more information see https://jobenomics.com/.