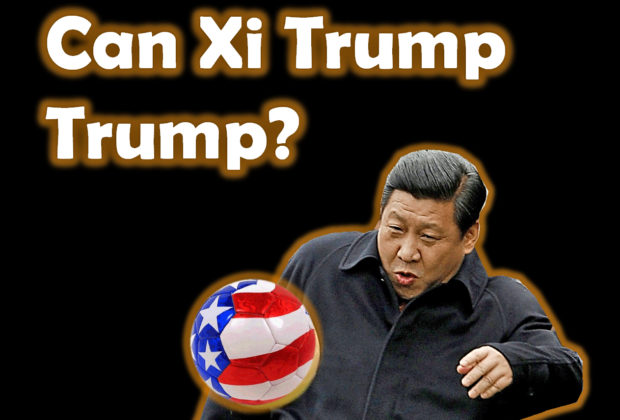 China represents the greatest U.S. near-peer competitor for NTR global dominance with emphasis on mastering the emerging digital economy in order to elevate hundreds of millions of rural poor from poverty.  China’s transition from a physical (mainly manufacturing) economy to a digital economy is both rapid and impressive.

According to President Xi’s opening address of the 2016 G20 Summit in Hangzhou, China, “Modernizing a big country with a population of more than 1.3 billion is an endeavor never undertaken in the history of mankind….turning China into the world’s second biggest economy, the biggest trader of goods and the third largest

According to McKinsey & Company, the explosive growth of China’s emerging middle class is not over yet.  By 2022, McKinsey estimates that more than 75% of China’s urban consumers will earn middle-class wages from $9,000 to $34,000 a year—up from only 4% in year 2000.  In purchasing-power-parity terms, this wage range is between the average income of Brazil and Italy.

As the Chinese have proven, small business creation provides for income opportunity and wealth creation for many hundreds of million people.  Over the last two decades, the Chinese have been able to lift 700 million people out of poverty.  However, this is the past.  The future is not so certain.  President Xi agrees and stated in his G20 opening remarks that China has reached a “deep water zone where tough challenges must be met.”  The manufacturing miracle that has lifted so many people out of poverty is replete with challenges including overcapacity, pollution, debt, inefficient state-owned enterprises and a middle-income trap.

A slowing international global economy, lower exports, increasing competition and protectionism exacerbate the challenge to economic reform.  According to Xi, China has reached a new historical starting point, a new normal, which requires China to both reform and foster new drivers of economic and social development.  As part of China Five Year Plan, the guiding principle for China’s economic future, as articulated by Xi, is termed “supply-side economic reform.”  Unlike the Reaganomics free market definition of supply-side economics, the Chinese version calls for more central planning of the economy and changing the Chinese economy’s growth drivers, growth model and economic structure to a digital age innovation-driven development strategy.  As stated by Xi, “the combination of the virtual (digital) economy and the real economy will bring revolutionary changes to our way of work and way of life.”

From a Network Technology Revolution perspective, China’s strategic challenge is balancing income disparities between the rural poor and increasingly affluent urban middle-class.  Today, China has over 635 million people in rural areas compared to 59 million in the United States.  Providing internet services to rural communities is more of a challenge than metropolitan areas with more resources and better infrastructure.

While making significant progress over the last decade, China’s percentage of internet users (49.3%) is only slightly better than the world average (40.7%) and significantly below the United States (87.4%).  Of the 649 million Chinese internet users, 86% (557 million) accessed the internet by phone.   Undaunted by these limitations, China is assiduously exploiting the Network Technology Revolution not only to overcome domestic inequities but to become a world-class model for the rest of the world, including the United States that has comparable challenges in balancing inequalities between rich/poor and urban/rural American communities.

China’s strategic framework can best be characterized by Chinese Premier Li’s March 2015 address when he urged the Chinese people to “ignite the innovative drive of hundreds of millions of people.”  According to the Hong Kong Economic Journal, the oldest and preeminent Chinese business newspaper, Premier Li was referring mainly to the “new China” that is driven by China’s online revolution (aka the Network Technology Revolution).

As a result of central government planning, municipalities across China have designated 129 special high-tech zones that have been approved by the State Council and are equipped with the latest NTR technologies, processes and systems to enable mass production of innovative and entrepreneurial startups.  The United States has four analogous high-tech hubs in San Francisco (Silicon Valley), New York City, Boston and Seattle.

According to statistics from both the U.S. National Science Foundation and the Chinese National Bureau of Statistics (NBS), the growth of Chinese technology has exploded over the last several decades.  This growth is likely to continue unabated with more and more R&D and S&T focused on the Network Technology Revolution and related e-commerce and service industries.  According to China’s Administration for Industry and Commerce, in 2015, China created over 4.4 million new companies, a 22% gain over the previous year, of which 78% were service industry startups.  China’s service industries now account for about half of China’s GDP value added by industry, whereas manufacturing equates to about one-third value added, according to the NBS.

China has 1.4 billion citizens compared to America’s 320 million.  Both countries have approximately 20 million students enrolled in higher education.  However, China’s higher education growth rate has been explosive—up from 1.4% in 1978 to 20% in 2015—and is likely to continue expanding at current rates with a state-driven, high-technology curriculum emphasis.  According to U.S. National Science Foundation, China is the world’s number-one producer of undergraduates with degrees in science and engineering (49% of all Chinese bachelor’s degrees compared to 33% in the United States).

Chinese students now make up 31% of all international college students at U.S. universities, according to data from the Institute of International Education.  In the 2013/2014 school year, 304,040 Chinese students studied in the U.S., an increase of 10.8% from the previous year and a five-fold increase over the previous decade.  In the 2013/2014 school year, 13,763 U.S. students studied in China, a decrease of 4.5% from the previous year.  Fields of study for international students in America are Business & Management (20%), Engineering (20%), Math & Computer Science (12%) and Intensive English (5%)—fields necessary to compete in the global digital economy.  Approximately two-thirds are enrolled in undergraduate programs and one-third in post-graduate programs.

Digital toolsets and intellectual capital are largely free for the taking.  According to James McQuivey, Vice President at Forrester Research and the leading analyst tracking the development of digital disruption, China has a well-trained, motivated and entrepreneurial labor force that has access to technologies, distribution partners, supply chains and physical infrastructure that “China didn’t have to pay for because the rest of the world had already seen fit to create them.”

China’s state-driven economic masters are skilled at one-way transactions.  If a company wants to do business in China, intellectual capital transfer is part of doing business.  For example, in order for Boeing to sell airplanes in China, it is required to manufacture significant portions of the air frame in China along with providing the intellectual capital to do so.  The same is true in the digital economy.  However, Chinese e-commerce sights are largely closed to imported products and services, but wide open to exported Chinese products and services.

Many major U.S. corporations are now voluntarily training Chinese how to compete in the global digital economy.  For example, Tim Cook, Apple’s CEO, has visited China a half-dozen times since he took over for Steve Jobs (who never visited China) in 2011.   In 2016, Cook visited China twice and announced that Apple will build its first Asia-Pacific research and development center in the country, largely to boost its flagging iPhone Chinese sales.  Sales in Greater China, once touted as Apple’s next growth engine, decreased by a third in mid-2016, after having more than doubled a year earlier.  Apple is also translating its hardware operating language (iOS) into Mandarin Chinese to make it easier for 850 million native Mandarin speakers to build iOS apps and compete in the highly lucrative app market that is currently dominated by American app developers.

Running any kind of social network in China, especially as a foreign company, is extremely formidable business proposition.  Chinese e-commerce companies are advantaged by anti-competition Western policies, like the government’s Great Firewall, the main instrument to achieve internet censorship in China, Chinese media bias, public support of things made in China and the lack of understanding on Chinese cultural norms.  WeChat serves as an excellent example.  WeChat is China’s leading messaging app, created and produced by Tencent, dwarfs Facebook’s WhatsApp, the world’s leading messaging app with 900 million active user, that is freely available in China.  WeChat has over 700 million monthly users, contains features (voice, browsing, games, purchase and pay online, send money, manage credit card bills, check news, book appointments or hail a cab) that are tailored to Chinese users and accounts for more than one-third of all the time spent online by Chinese mobile users, which will be very difficult and expensive for Facebook to offer in China.  More importantly, WeChat is an example of an innovative multi-application provider of interest to Western companies, like Facebook, Google and Microsoft, which are interested in WeChat as an overall mobile operating system as opposed to a mere messaging application.

According to Reuters, to further curry favor with Beijing, in May 2016, Apple announced an investment of $1 billion on a ride-hailing application made by Didi Chuxing, a Chinese transportation network company headquartered in Beijing and major competitor to American-based Uber in China.   In July 2016, Uber decided to pull the plug in China and merged with Didi Chuxing.

China’s strategic vision also includes private sector business investment as part of a national Public Private Partnership (PPP) initiative to develop China’s infrastructure.  According to the World Bank from 2010 through 2014, gross domestic investment in fixed assets (plants, machinery, equipment and infrastructure) in China was 48% of GDP compared to 19% in the United States.  China’s gross fixed capital formation has been spectacular, up over tenfold ($409 billion in 2000 to $4.6 trillion in 2014 versus comparable U.S. expenditures of $2.4 trillion in 2000 to $3.5 trillion in 2014) since the turn of the century.

The bulk of “private sector” investments were from state-owned banks that account for more than 20% of China’s fixed asset investment.  Investments from private firms have dropped from a high of 35% in 2006 to 2% as of 2016 in fixed assets as calculated by a percentage increase from a year earlier according to The Economist.  While China’s private investment firms are weary of major physical fixed asset schemes, they are very interested in financing digital infrastructure initiatives from broadband to e-commerce to small and micro business development PPPs.

Chinese investment capital does not only come from the quasi-private sector but also from the Chinese central government itself as part of an effort to spur entrepreneurship and stimulate a flagging economy.  According to Bloomberg data, over the last two years the Chinese central government has opened 1,600 high-tech incubators for startups backed by a $340 billion government-guided venture capital fund that comes from tax revenue and state-backed loans.  In addition to the central government fund, each of the 23 provinces, 4 municipalities (Beijing, Tianjin, Shanghai, Chongqing) and 5 autonomous regions are creating their own venture capital funds.  For example, Hubei Province in Central China raised $30 billion of their $150 billion goal.

The bottom line is that the competition for global digital supremacy has begun.  The United States and China are running neck-to-neck.  However, China is beginning to pull ahead due to a more mature public-private partnership approach.  President Trump’s pre-inauguration meeting with U.S. and Chinese (Jack Ma) tech-leaders will help him formulate the U.S. game plan to compete effectively.

Stay tuned for the next installment in the President Trump’s New Economy Challenge series entitled, “Automated Trump Workforce?” scheduled for release on 17 March 2017.