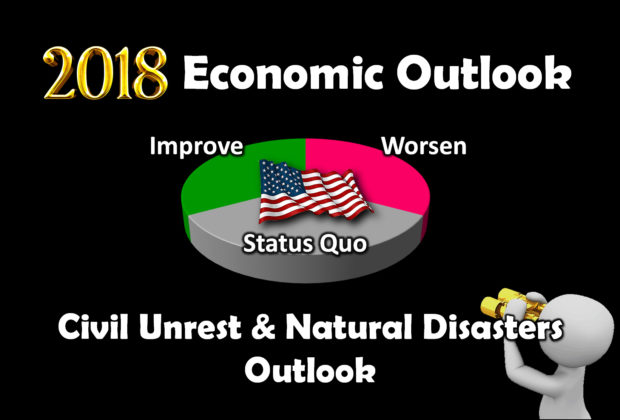 The Jobenomics 2018 U.S. Economic Outlook predicts an equal probability for economic improvement, maintaining the status quo or an economic slowdown in 2018.   This assessment is based on a detailed analysis of six strategic considerations: Economy, Business, Labor Force, Governance, Domestic Disruptors and International Disruptors.  This posting deals with the economic impact of potential Civil Unrest and Natural Disasters in the United States in 2018.  The entire 60-Page Jobenomics 2018 U.S. Economic Outlook report can be downloaded free from the Jobenomics Library.

Civil Unrest.  The 20th Century was an era of institution-building.  The 21st Century portends to be one of anti-institutionalism.  Striking a proper balance will help ensure continued economic growth.  Left unchecked, civil unrest, civil disobedience, and violence are likely to ensue.

As implied by the earlier Good Reason to Be Discouraged, Frustrated and Angry chart, the American dream is more of an American fantasy than an achievable goal for many at the base of the U.S. socioeconomic pyramid.  After a brief respite during the Great Recession of 2007-2009, income inequality and public restiveness are growing again in America.

Economic (income and wealth) inequality provides the fuel for schisms, civil unrest, and violence.  From a Jobenomics perspective, America’s political, economic and social divide, coupled with weak governance, could lead to an era of vigilantism by extremists who have an ax to grind.  August 2017’s riots in Charlottesville could be a precursor to more severe events in 2018.

2017 has given rise to a new and more virulent social justice movement enforced by “social justice warriors.” These warriors have deep-seated convictions on a wide range of polarizing issues including identity politics, multiculturalism, nationalism, feminism, and environment.  Social justice warriors thrive in divisiveness, promulgate solutions based on their narrowly-defined self-interests, and portray themselves as oppressed victims in an unjust society.  To those who ascribe to a supreme moral purpose, their ambitions are inviolate.  Desecration of their symbols or icons is a call to arms for the movement’s social justice warriors.

Civil unrest in America can manifest itself in many forms from protests to activism to militancy to violence.  2016 and 2017 had half as many violent demonstrations and riots as the entire 16-year period from 2000 through 2015.  2018 is likely to experience the same level of civil unrest and perhaps worse if the political divide does not narrow.  Washington sets the tone for America.  If our elected officials cannot be civil, how can the country be civil?  Economic prosperity does not flourish in societies that are uncivilized.

Political activism is turning more militant as indicated by far-left Antifa militants (so-called anti-fascist groups focused on engaging and harming right-wing conservatives) and far-right White Supremacists and neo-Nazi militants.  This militancy is also focusing on lower level government officials, such as the new FCC Chairman.  After making the unpopular decision to repeal net neutrality, Chairman Pai receive a barrage of death threats, and his children were harassed at their home by protestors with signs bearing the children’s names.  If these trends continue in 2018, America will become even more ungovernable.

From a forecasting perspective, Jobenomics postulates that 2018 will either be equal to or better than 2017—the worst year in history.  Climate change advocates would be more pessimistic.  Seismophobics (fear of earthquake phobia sufferers) might be more despondent.  California has not experienced a major earthquake (magnitude 7.0 to 7.9 on the Richter scale) over 7.0 since 1999, and a great earthquake (8.0+) since the 1700 Cascadia earthquake that caused a tsunami massive enough to smack Japan.

Standby for the next postings in the International Disruptors series, or download the entire 60-Page Jobenomics 2018 U.S. Economic Outlook at the Jobenomics Library.