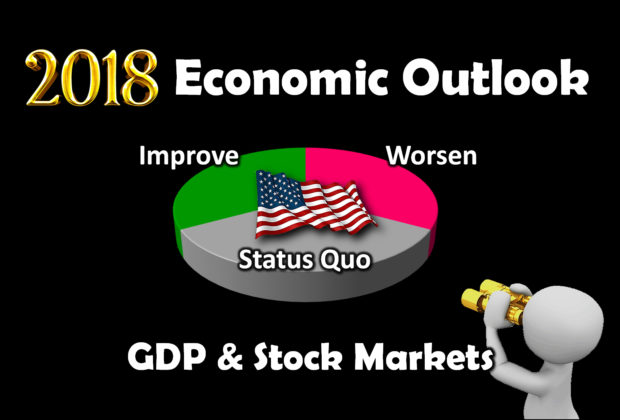 Economy: GDP Growth and Stock Markets. The Jobenomics 2018 U.S. Economic Outlook predicts an equal probability (33.3%) for economic improvement, maintaining the status quo or an economic slowdown in 2018.  This assessment is based on a detailed analysis of six strategic considerations: Economy, Business, Labor Force, Governance, Domestic Disruptors and International Disruptors. This posting deals with two macroeconomic factors impacting the Economy: GDP Growth and Stock Markets.  The entire 60-Page Jobenomics 2018 U.S. Economic Outlook report can be downloaded free from the Jobenomics Library

GDP Growth.  This Jobenomics 2018 U.S. Economic Outlook report anticipates that GDP will get better in 2018.  Most economists believe that economic growth depends on employment and GDP growth, which in turn is dependent on stable investment in business and job growth.  For the U.S. economy, the ideal rate of GDP growth is around 3%.  GDP growth exceeding 4% signals overheating and asset bubbles.  GDP growth below 2% is sclerotic that makes the U.S. economy vulnerable to financial downturns.  Two-quarters of negative GDP growth triggers a recession. When an economy grows at negative or sclerotic GDP rates, instability and unrest occur, and governing institutions lose their credibility.

Since the Great Recession, the U.S. economy achieved 102-months of continuous GDP growth, which is just shy of the records set in the 1960s (105 months) and the 1990s (119 months).  Hypothetically, if the current economic expansion matches the historical record of 119 months, the next recession will occur in 22 months or in June 2019—a little more than halfway through President Trump’s first term in office.

While there is no evidence of a time limitation, history is not on the side of continued expansion.  A financial downturn could easily dismantle the Administration’s economic and workforce efforts to obtain 4% sustained GDP growth and 25 million new jobs over the next ten years.  Financial downturns happen more frequently than many experts are willing to acknowledge.  Since the 1940s, the U.S. economy averaged 1.7 recessions and three financial crises per decade.

Progress on tax measures, along with continued strength from business and consumer confidence, should lead the U.S.economy to 3% growth in 2018, according to The Conference Board, global, independent business membership and research association.  Goldman Sachs economics and the Federal Reserve forecast 2.5%.  Jobenomics projects that due to tax cut exuberance U.S. GDP growth will reach 3.5% during the first half of 2018, but is likely be in the range of 2.5% to 3.0% by the end of the year if tax cuts do not produce the expected returns.

Stock Markets.  The bull market is now 105 months old.  All three major U.S. stock markets are now at historic highs.  Total U.S. stock market capitalization is now valued at $30 trillion as indicated by the Russell 3000 Index, an index that represents the 3,000 largest U.S.-traded stocks or 98.5% of all U.S. incorporated equity securities.  Given its momentum, Jobenomics envisions that U.S. stock markets may get a little better or stay the same, barring any internal or external disruptions.

U.S. stock markets greatly exceeded expectations in 2017, doubling the number of returns in 2016, and creating approximately $5.5 trillion of new wealth.  Consequently, many market-watchers believe that 2018 will be a year of profit-taking and cautious speculation.  Nervousness about political, military and trade clashes will inhibit the expansion of the U.S. bull market.

A major reason for the U.S. stock market success is that the U.S. economy has been the “least ugly” economy in the world.  The European Union has been in crisis with many of its southern member nations sliding in and out of recession.  While still respectable with 6.8% GDP growth in 2017, the Chinese economy is no longer generating double returns as it did in the past.  A large number of developing economies and emerging nations are struggling.  Oil-rich Middle East economies are reeling from low oil prices, insurgencies, and terrorism.  So until things change, America should continue to be a haven for foreign investment.  However, the international landscape is rapidly evolving.  The global economy is now growing, which could discourage foreign investment in favor of speculating in local markets.

Having a businessman President with larger-than-life bravado and a penchant for making deals should keep interest in U.S. stock markets high.  While Trump’s America First policy annoys foreigners diplomatically, it should attract more foreign investment since America is focusing on business growth after a decade of inattention.  The passage of the TCJA will also encourage investment in hopes of a potential stock market rally.

The Federal Reserve played a major role in stock market appreciation since the Great Recession.  Since the onset of the Great Recession, the Fed spent almost 11 trillion dollars’ worth of stimuli and incentive programs.  Now that the Fed accomplished its mission getting the economy back on track, it is now reversing course by unwinding the trillions of dollars of toxic assets from failing banks and increasing the Federal Funds Rate.  So far the marketplace has shrugged off these Fed rate increases but is wary of future Fed actions that may have a cooling effect on the red-hot stock market.

For 2018, the stock market’s recent success story may be its biggest liability.  Almost daily, pundits predict that the stock market bubble is about to pop and the “greatest financial reset in U.S. history” could soon materialize.  To some extent, these dire predictions are credible due to the bull market’s exuberant growth rate.  Also, the U.S. government (Fed and Treasury) expended much of its financial resources and goodwill (i.e., the willingness of foreign countries to buy U.S. securities and bonds) during the Great Recession, and may not have the financial wherewithal to stymy a future downturn.

As a result, many economists and financial institutions are cautiously optimistic about stock market performance in 2018.  From a Jobenomics perspective, growth will continue in 2018 but not at the rate it did in 2017.  Barring any domestic or international disruption, U.S. stock indices are likely to rise between 5% and 15% in 2018.  However, other organizations are not as bullish.  Fifteen Wall Street banks surveyed by Bloomberg expect that the stock market growth rate in 2018 will be around 4.5%, based on anticipated growth of the preeminent and trendsetting S&P 500 index.

The S&P 500 is widely-regarded as the best single gauge of large-cap U.S. equities and includes 500 leading companies.  Market volatility is one of the reasons for the conservative 4.5% S&P 500 growth forecast.  During the post-recession period, S&P 500’s annual returns had been highly cyclical from a high of 30% in 2013 to a negative 1% in 2015.  Many analysts view 2017’s cyclical apex high of 20% as a  prelude to a cyclical decrease in 2018.  Volatility in Washington politics and global affairs also contribute to profit-taking and cautious speculation in 2018.

About Jobenomics:  Jobenomics deals with the economics of business and job creation.  The non-partisan Jobenomics National Grassroots Movement’s goal is to facilitate an environment that will create 20 million net new middle-class U.S. jobs within a decade.  The Movement has a following of an estimated 20 million people.  The Jobenomics website contains numerous books and material on how to mass-produce small business and jobs as well as valuable content on economic and industry trends.  For more information see https://jobenomics.com/ .