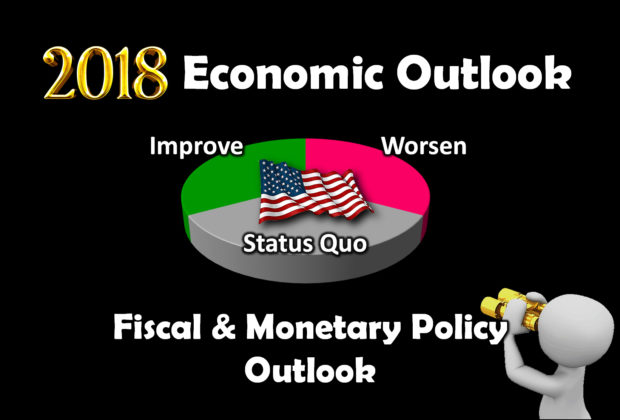 Governance: Trump Administration, Fiscal Policy (Congress) and Monetary Policy (The Fed).  The Jobenomics 2018 U.S. Economic Outlook predicts an equal probability (33.3%) for economic improvement, maintaining the status quo or an economic slowdown in 2018.   This assessment is based on a detailed analysis of six strategic considerations: Economy, Business, Labor Force, Governance, Domestic Disruptors and International Disruptors. This posting deals with the outlook for Fiscal and Monetary Policy in 2018.  The entire 60-Page Jobenomics 2018 U.S. Economic Outlook report can be downloaded free from the Jobenomics Library.

Given Washington’s bitter political divide, governance is a serious issue.  From an economic perspective, 2018 is very much in question.

Regarding impact to U.S. economic prosperity, Jobenomics rates Congressionally-controlled fiscal policy (taxes and spending) as the worst of the twenty-two strategic considerations listed above.  In the first six weeks of 2018, the U.S. Congress has passed historic tax cut and spending bills that will increase national debt annually to the trillion-dollar level not seen since the early years of the Obama Administration.  Economic recovery from the Great Recession claimed a significant share of $1.3 trillion deficits in 2010 and 2011.  Today, the economy is in much stronger shape.  Due to recent legislation, the U.S. deficit is projected to be $0.8 trillion in 2018 and $1.2 trillion 2019.  These are levels of spending that are fiscally irresponsible and dangerous if the U.S. economy does not grow to the 4% level as promised by the Trump Administration.

The Federal Reserve System (the Fed, the central bank of the United States) is responsible for monetary policy (printing money and interest rates) and is unwinding policies (quantitative easing and near zero interest rates) instituted during the Great Recession and its aftermath.  Consequently, Jobenomics believes that Fed actions will maintain the status quo or slightly improve the U.S. economic situation.

Fiscal Policy (U.S. Congress).  Given the discordance generated by the ideological divide in Congress, the U.S. economy is likely to get worse, or even much worse.  Internecine attacks will escalate during the run-up to the November 2018 midterm elections.  For the opposition party, flipping the House and Senate, and overthrowing the Republican agenda are overarching concerns.

Few people understand that the President only indirectly controls fiscal policy.  The Legislature is responsible for financial policies that adjust federal spending levels and tax rates.  According to the Congressional Budget Office, fiscal policy can affect the U.S. economy through their impact on national borrowing, private demand for goods and services, people’s incentives to work and save, and federal investments.

Today, Congressional policy-making is determined more by force (majority vote) than consensus (bipartisanship).  For example, the TCJA was passed by a Republican-controlled Congress, with the support of a Republican president, with zero Yay-votes from Democrat Senators and House members.  Another example is when a Democrat-controlled Congress and Democrat president unilaterally passed the 2010 Affordable Care Act, otherwise known as Obamacare.

Republican and Democrat legislators have antithetical views about fiscal policy as well as the disposition of the United States and America’s role in the 21st century.  The political right supports nationalist, capitalistic, and conservative economic policies.  The political left supports globalist, socialistic, and liberal economic policies.  Regrettably, legislators (and their constituents) are at a crossroads where the left no longer believes anything the right as to say, and vice versa.

Many pollsters believe that America’s ideological divide is as vast as it was before the Secession that led to the American Civil War.

A recent political poll by the Pew Research Center, a Washington DC-based nonpartisan opinion-polling institute, states that Republicans and Democrats are now much further apart ideologically than at any point since 1994 when PEW began surveying the Partisan Divide, and “decidedly wider” since social media made its debut in 2004.  According to Pew, “In nearly every domain, across most of the roughly two dozen values questions tracked, views of Republicans and Republican-leaning independents and those of Democrats and Democratic leaners are now further apart than in the past.”

Today’s partisan political divide is social media-driven considering the amount of negative political advertising, manipulation, and hate-speech that abounds on the internet.  Traditional media outlets (i.e., television and radio) also add fuel to the fire but are often tame in comparison to the vileness and character assassinations posted on the internet.

The social media phenomenon is not unique to the United States.  Social media was used to ignite the 2011 Arab Spring, propelling the Middle East and the Ummah into chaos.  Whether this level of lawlessness will infect the United States is not outside the realm of possibility now that American political warfare is tantamount to a 21st Century blood-sport without the actual spilling of blood—at least not yet like happened in the Civil War and the 1960s.

From an economic perspective, what concerns Jobenomics the most about Congressional polarization is the penchant for the opposition party to dethrone the ruling party.  Republican opposition to the progressive agenda and President Obama was terrible.  Democrat opposition to anything Republican is now even worse.  Worst of all is the palpable hatred for President Trump and the unified effort by Democrats to remove him from office by any means possible.  This atmosphere is destructive and introduces economic insecurity.  Moreover, it encourages foreign economic and military intervention to exploit our weaknesses.

Consequently, Jobenomics predicts that the Congressional political divide is likely to make the U.S. economic situation worse, or much worse, during the run-up to the November 2018 midterm election.  Crucial fiscal policy actions from the size and disposition of the budget, to welfare reform, to infrastructure spending, are likely to be deadlocked.   Assuming that the Democrats do not flip the Senate or House, or dethrone the President, 2019 is expected to be a much tamer year.

Monetary Policy (The Fed).  In 2018, U.S. monetary policy is unlikely to change, and may even get better, as Federal Reserve intervention curtails now that the U.S. economy and labor force is on firmer ground.  However, while stronger, the U.S. economy is less capable of dealing with a future downturn.

Unbeknownst to most American citizens, while the Fed is an instrument of the U.S. government, it was created in 1913 as an independent organization that does not have to seek approval from the President or Congress for its decisions—ostensibly to keep it free of politics.  A presidentially-appointed Board of Governors governs the Fed.  While the Board of Governors is an independent government agency, Federal Reserve Banks are set up like private corporations. Member banks hold stock in the Federal Reserve Banks and earn dividends.  The Fed’s twelve regional member banks oversee privately-owned U.S. member banks.

According to the Fed website, Fed also “promotes the stability of the financial system in the United States and abroad, monitors the safety and soundness of individual financial institutions, fosters payment and settlement system safety and efficiency, and promotes consumer protection and community development.”

Since the onset of the Great Recession, U.S. Federal Reserve, U.S Treasury, U.S. Department of Housing and Urban Development (HUD), and the Federal Deposit Insurance Corporation (FDIC) injected $17 trillion worth of bailouts, buyouts, and stimuli into the U.S. economy.

The combination of a wide variety Fed programs, Treasury asset relief programs and stimulus packages, FDIC aid to troubled banks, and HUD programs for troubled homeowners accomplished what they were meant to do—stop the country from sliding back into recession.  On the other hand, the U.S. economy became addicted to the stimuli and may not be as robust as many believe it to be.  Today, the Fed has fewer financial resources, which makes the U.S. economy more vulnerable to future economic downturns and depreciates the prospects of a rapid economic recovery.

Over the last decade, the Fed injected over $11 trillion worth of financial bailouts, buyouts, and stimuli into the U.S. economy.  The Fed’s Quantitative Easing (printing money) programs equated to over $5 trillion.  In addition to bailouts, buyouts, and stimuli, the Fed instituted an unconventional Zero Interest Rate Program (ZIRP) policy to energize the U.S. economy.  Nominal ZIRP interest rates encouraged people to spend rather than save due low rates of return in traditional saving accounts, certificates of deposits and bonds.

With the Fed support, ZIRP policies proliferated around the world.  Many countries even took ZIRP a step further by implementing Negative Interest Rate Programs (NIRP) that charged customers and banks fees to save (store) money.  These actions weakened the balance sheet of central banks around the world—the effects of which are still unknown.   However, in today’s highly interconnected global economy, a major meltdown in a country can easily have a domino effect on other countries.

The Fed accomplished its mission getting the economy back on track and is now reversing course by unwinding the trillions of dollars of assets and increasing the Federal Funds Rate.

During the Great Recession and the post-recession recovery period, the Fed’s balance sheet ballooned from $147 billion in 2008 to $864 billion in January 2009 to $4.4 trillion today—the biggest in the world.  During this period, the Fed acquired $1.7 trillion worth of toxic asset (mortgage-backed securities).

The Fed now needs to “normalize” the bank’s balance sheet.  In September 2017, the Fed announced that it would initiate a Balance Sheet Normalization Program that will gradually liquidate the Federal Reserve’s securities holdings in its portfolio.  Liquidation will begin at a rate of $10 billion per month, with a 60-40 split of Treasuries and mortgage-backed securities and “gradually” increase to $50 billion per month.

At maximum rate, this balance sheet tapering could release upwards of $600 billion per year into the U.S. economy.  $600 billion, the size of annual U.S. defense spending, is a significant amount of money for the economy to absorb.  Many economists fear this amount of money will perturb the markets and impact fixed income investors.  Moreover, it increases the risk of increased inflation especially if Congressional fiscal policies increase spending (which it intends to do) or decrease revenues (which it did with the TCJA).

In summary, Jobenomics does not consider a significant change in U.S. monetary policy is likely as long as inflation stays under control and the global economy retains its current footing.  So far the U.S. economy and labor force are both operating without Federal Reserve System support.

Standby for the next series of postings regarding potential Domestic Disruptors (Technology, Income & Wages, Civil Unrest, and Natural Disasters), or download the entire 60-Page Jobenomics 2018 U.S. Economic Outlook at the Jobenomics Library.