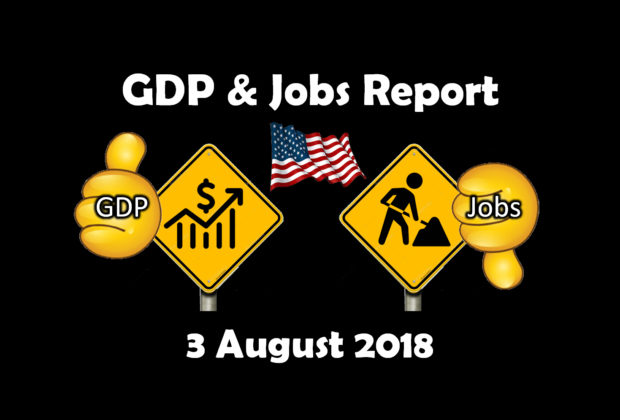 While U.S. GDP growth is improving significantly, the latest employment reports indicate marginal labor force improvement.  Consequently, the U.S. economy is not yet gaining enough momentum to achieve President Trump’s goal of creating 25 million new jobs and sustained 4% GDP growth over the next ten years.  On the plus side, Q2 2018 GDP growth reached a four-year high of 4.1%, U.S. stock markets are returning to historical levels, the unemployment rate remains at a near post-recession low (3.9%), and consumer confidence is at a record high.  Conversely, the number of sidelined citizens who can work (but don’t) increased to 95.6 million people, small and startup businesses are under performing, American companies have 6.7 million open jobs that they can’t fill due to a lack of qualified, skilled applicants, and the number of skilled legal immigrants needed to fill open jobs are declining and seeking opportunities in other countries.

As reported on 27 July 2018 by the Bureau of Economic Analysis (BEA)[1], U.S. Q2 2018 GDP growth reached 4.1%.  The last time that the United States breached 4% in a single quarter was in Q3 2014.  Since the turn of the Century (the year 2000), out of a total of 74-quarters, only 11-quarters broke the 4% barrier.  As of 3 August 2018, the Federal Reserve Bank of Atlanta’s GDPNow[2]  estimate for Q3 2018 is 4.4% and the Federal Reserve Bank of New York’s Nowcast[3]  estimate is 2.58%. If President Trump can achieve his goal of sustained 4% GDP growth over the next decade, the U.S. economy will boom and American workers should be euphoric since this rate of GDP growth indicates that the President’s goal of creating 25 million new jobs is also achievable.

The latest U.S. Bureau of Labor Statistics (BLS)[4] and ADP Research Institute[5] employment reports for July 2018 indicate that the United States created only 157,000 (+170,000 private sector workers and -13,000 government employees) and 219,000 (private sector) new jobs, respectively.  Both figures are below the monthly 250,000 job threshold advocated by most economists.  The number of unemployed (U3 rate) decreased by 284,000 citizens, which was offset by an increase of 96,000 voluntary workforce departures to the BLS Not-in-Labor-Force category (i.e., people who can work but don’t work).

From a Jobenomics standpoint, to make President Trump’s 25 million new jobs and sustained 4% GDP growth goal more achievable, the Administration must spend more time on small, micro and startup business creation, and reduce the size of 95.6 million sidelined workers that represent approximately 30% of the U.S. population.

Download a copy, at no cost, of this 21-page report at the Jobenomics Library.  To encourage (entice) you to do so and send a copy to your friends and associates, I included some of the chart and tables.