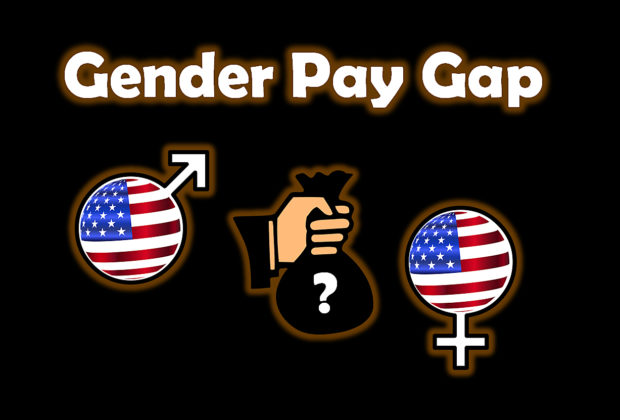 The gender pay gap is a highly-charged political and social issue.  Unfortunately, few Americans fully understand the data behind gender income inequality.  While it is true that American men make more than women, the gap is narrowing.  In 2016, American women earned only 2.4% less, or 98 cents on every dollar, than men in similar jobs, according PayScale, a leading U.S. online compensation information company.[1]  This 2.4% figure is a far cry from the widely advertised 76% number by activists.  On the other hand, across all jobs in the United States, PayScale estimates that women earn 23.7% less or 76% for every dollar earned by men.  To take a deeper dive into gender gap statistics, Jobenomics analyzed gender income and earnings based on official government data reported by the U.S. Census Bureau and the Bureau of Labor Statistics.  Download this report @ Gender Gap, 14 October 2017

According to the Census Bureau’s 2016 Income and Poverty in the United States report women are closing the gap between the sexes over the last six decades.  As shown, in terms of median income, since 1960, American females have narrowed the female-to-male earnings ratio gap from 60% to 80.5% in 2016 based on real median earnings of men ($51,640) and women ($41,554) who worked full-time, year-round.  This ratio is based on median earnings (an occupational median wage estimate is the boundary between the highest paid 50% and the lowest paid 50% of wage earners) as opposed to mean earnings (an average wage; an occupational mean wage estimate is calculated by summing the wages of all the employees and then dividing the total wages by the number of employees).

Median versus Mean Earnings by Sex in 2016

This chart, derived from 2017 CPS ASEC raw data by Jobenomics, shows in greater detail the differences between the 164.6 million American males and females who received earnings in 2016.

Median household income is the single most widely used measure of income by the Census Bureau.  Medians are often viewed as a better central measure than means, which can be distorted by a small number of extremely large values.   For the purposes of this report, Jobenomics prefers means over medians since these “distortions” are important in understanding gender income inequality.  In 2016, real median earnings of men ($51,640) and women ($41,554) was significantly different from the real mean earnings of men ($71,916) and women ($53,372), which accounts for the difference between the 80.5% and 74.2% female-to-male earnings ratios.

Percent of U.S. Wage Earners Above & Below Mean Income in 2016

As highlighted in yellow, according to 2017 CPS ASEC data, out of a total of 164,631,000 American workers 15-years old and over with earnings, only 28% earned above mean earnings in 2016.  In terms of gender, 35% of American male wage earners made above the mean compared to 20% of their female counterparts.

While the part-time workforce is currently only one-third the size of the full-time workforce, if Jobenomics is correct regarding the contingent workforce becoming the dominant form of U.S. labor in the near future, income disparity for low wage earners of both sexes will grow in importance and must be addressed now with actionable solutions.

CPS ASEC data therefore supports the claim that females earn 72.4% (mean) to 80.5% (median) of the earning of their male counterparts for full-time equivalent workers.  CPS ASEC data further indicates that females earned less across all work categories and were far more likely to work part-time.  Consequently, female workers are poorer and more likely to be part of the contingent workforce than their male counterparts.  These are extremely important issues that need to be rectified.  However, these statistics do not adequately explain the critical question of why females earn less.

The fact that almost twice as many men make above mean earnings than women largely explains gender pay gap and is often cited as the basis for the “glass ceiling” argument (i.e., an intangible barrier within a hierarchy that prevents women from obtaining upper-level positions).  According to the Korn Ferry Institute, a preeminent authority on leadership and talent, across all C-suite titles (CEO-Chief Executive Officer, CFO-Chief Financial Officer, CIO-Chief Information Officer, CMO-Chief Marketing Officer, CHRO-Chief Human Resources Officer) in six leading U.S. industries (Consumer, Energy, Financials, Life Sciences, Industrials and Technology) only 24% are occupied by women executives, ranging from a low of 1% of all CEOs to a high of 55% of all CHROs.[6]

There are many reasons cited for the glass ceiling ranging from male chauvinism to women’s choice of occupations. The U.S. female workforce is concentrated on generally lower paying jobs like teaching, nursing, secretarial and healthcare occupations that are approximately 80% female occupations. Women are also stymied by the so-called “motherhood penalty” that disadvantages women in highly competitive upper management positions that require long hours as a “sign of commitment and leadership potential”.[7]  Regardless of reason, the overwhelming predominance of women in lower wage categories is one of the primary reasons that able-bodied women chose not to work as well as a major inducement towards welfare and other means of public assistance.

From a Jobenomics perspective, ethnology (cultural and relational differences) plays a major role on answering why females make less income.  The diversity movement is narrowing the gap between female and male income inequities, but not fast enough to address the problem of an eroding American middle-class and energizing a lukewarm economy.  To be more effective, the diversity movement needs to shift from its visible attributes orientation, such as gender and race, to more invisible attributes like parental, marital, socio-economic status, as well as educational, experiential, employment experience in order to craft solutions that will enhance the labor force.

To that end, Jobenomics emphasizes women-owned-businesses over women-in-business as a potential national initiative that will empower women to enter and succeed in the labor force with greater satisfaction and earnings.  While there is nothing wrong with women pursuing opportunities with large established institutions, Jobenomics believes that many women will find greater opportunity and fulfillment by creating their own small and self-employed businesses that are tailored to their needs, lifestyles and expectations based on their invisible attributes and educational, experiential and  employment experience.  Contrary to common knowledge, the rate of employment growth and revenue of women-owned businesses has outpaced the economy and male-dominated businesses for the last three decades.  In a gender-neutral digital economy, women can compete globally from home-based businesses in ways never before possible.

[4] People are classified as having worked part-time during the preceding calendar year if they worked less than 35 hours per week in a majority of the weeks during the year. Conversely, people are classified as having worked full-time if they worked 35 hours or more per week during a majority of the weeks in which they worked.  Wages include total money earnings received for work performed during 2014. Earnings for self-employed businesses are considered wages.

[6] Korn Ferry Institute, The gap at the top, Women in the C-Suite, 17 August 2016, https://www.kornferry.com/institute/the-gap-at-the-top?articles

[7] The Economist, The Gender Gap, Women still earn a lot less than men, despite decades of equal-pay laws. Why?, 7 October 2017, https://www.economist.com/news/international/21729993-women-still-earn-lot-less-men-despite-decades-equal-pay-laws-why-gender