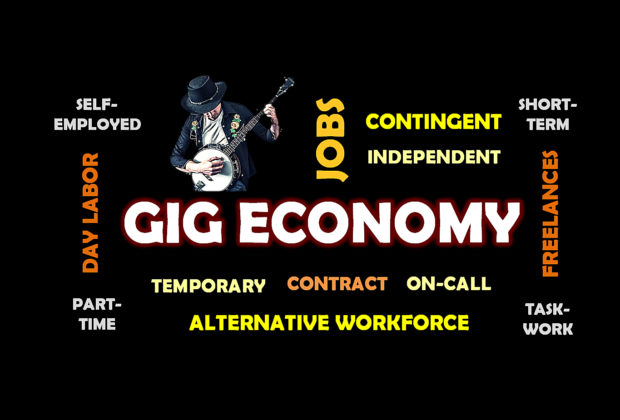 Even though Jobenomics estimates that the size of the U.S. contingent workforce is four-times greater than reported in the June 2018 BLS Contingent Worker Supplement, we applaud their landmark effort.  After a 12-year hiatus, this report now should be published on an annual basis to provide information for better policy-making on this vitally important topic.  Unfortunately, various news outlets are incorrectly analyzing the BLS CWS report.  For example, CNN Money[1] reported that “Gig economy jobs aren’t really taking over America’s workforce”, CBS Today[2] stated that “The gig economy is much smaller than many people thought”, and the New York Times[3] downplayed the impact of the contingent workforce in an article titled, “How the Gig Economy Is Reshaping Work: Not So Much”.  Poor media coverage often leads to bad policy-making.

Regarding the emerging digital economy, the BLS states that the CWS “does not have a definition of the gig economy or gig workers.”  Per the BLS, “researchers use many different definitions when they talk about the gig economy.  These definitions may overlap with contingent workers and some of those in alternative employment arrangements.  One of the strengths of the CWS is that it measures many different types of work, allowing researchers to study the workforce using their own definitions.” [4]

The scope of the June 2018 Contingent Worker Supplement is limited to contingent and alternative employment arrangements and not the greater gig economy.  Moreover, the CWS focuses on “wage and salary workers who do not expect their job to last” as opposed to individuals who pursue the gig/contingent work on a long-term basis as a matter of choice.  The reason for a glass-half-full approach by the BLS is understandable.  The U.S. government generally views contingent workers as a liability since these workers often receive lower wages compared to “standard workers” and frequently are not entitled to traditional employer-provided retirement and health benefits.  Consequently, low wage contingent workers tend to rely on government retirement, health benefits and other means-adjusted assistance programs to a much greater degree than standard workers.  Low wage earning contingency workers are also the group most likely to become discouraged, quit looking for work and voluntarily depart the labor force.

The BLS CWS is a snapshot of America’s contingent and alternative workforce arrangements based on data provided by the Census Bureau’s Current Population Survey (CPS) survey of 60,000 households in May 2017.  According to the CWS, 5.9 million persons (3.8% of American workers) held contingent jobs (on-call workers, temporary help agency workers, and workers provided by contract firms).  In addition to contingent workers, the survey also identified an estimated 10.6 million alternative workers (6.9% of total employment) who have other alternative work arrangements (independent contractors, independent consultants, and freelancers). In total, the CWS estimates that there are 16.5 million contingent and alternative employment arrangements or 10.7% of the 154 million workers in the U.S. labor force.

Jobenomics contends that the number of contingent workers is almost four-times greater than what the BLS CWS reported (40% versus 11%).  Why the difference?  The answer lies in the inclusiveness of the Supplement’s survey questions.

Perhaps the most significant difference between Jobenomics and BLS CWS analyses involves the emerging digital economy.  The CPS survey included questions to identify individuals who found short-term tasks or jobs through a mobile app (Uber, Lyft, Airbnb, etc.) or website (Amazon, eBay, TaskRabbit, etc.) and were paid through the same app or website.  These individuals are not included in the current June 2018 CWS news release, but will be included in a BLS Monthly Labor Review article on 30 September 2018.

Like all workers, individuals involved in electronic and mobile commerce are only considered contingent workers if they think their jobs are temporary and do not expect them to last, which is not the case for 154 million digitally savvy Millennials (Gen Y) and Screenagers (Gen z) who could pursue full-time, task-oriented careers in the emerging digital economy.  As such, Jobenomics views the gig/contingent economy as a tremendous opportunity to create tens of millions of jobs in the next decade.  This view is held by many other institutions and governments.  For example, the Chinese government plans to raise 500 million rural poor out of poverty in the next several decades via e-commerce and the emerging digital economy.[6]  Any implication by the media that the gig economy is not reshaping work is simply wrongheaded.

Knowing how the BLS defines the labor force and accounts for different workforce categories is essential to understanding the CWS.  BLS basic concepts involving employment and unemployment are straightforward. [7]

Since employment is defined as having a job and unemployment is described as actively looking for work, CPS survey questions examine whether an individual is working or wants to work.   Those who “do not expect their jobs to continue for personal reasons” and voluntarily depart the workforce (retire, go to school, join the underground/illicit workforce, or become dependent on public or private assistance) are not considered contingent workers.  Today, the BLS calculates that there are 96 million Americans in its Not-in-Labor-Force category.  Moreover, the BLS reports that 95% of these sidelined people “do not want a job now” and thus are outside the realm of the CWS.[8]  By presenting and reporting the gig/contingent economy as inconsequential, these sidelined citizens have little motivation to pursue income opportunities afforded by non-standard work agreements as a viable way to get jobs and start businesses.

In summary, this posting explains some of the reasons why the June 2018 CWS provides excellent information on the contingent and alternative workforce ecosystem.  However, CWS data must be analyzed for what it is and should not be construed as a complete picture of all the part-time, self-employed, independent workers in the contingent workforce.  For a complete picture, future Supplements should include contingent workers that expect their jobs to endure in addition to those who do not expect their work to continue.  Perhaps there will be a time when the BLS defines the gig economy or gig workers and explain how these workers relate to the contingent workforce.  Whether these workers amount to 11% of the U.S. labor as the BLS suggests or 40% as Jobenomics believes is relatively immaterial.   Both percentages indicate the contingent workforce is and will be both a major challenge and enormous opportunity for American wellbeing.

Download this report and send it to your associates by clicking: GIG-Contingent Economy – 9 June 2018

About Jobenomics:  Jobenomics deals with the economics of business and job creation.  The non-partisan Jobenomics National Grassroots Movement’s goal is to facilitate an environment that will create 20 million net new middle-class U.S. jobs within a decade.  The Movement has an audience of an estimated 30 million people.  The Jobenomics website contains numerous books and material on how to mass-produce small business and jobs as well as valuable content on economic and industry trends. For more information see https://jobenomics.com/.

[2] CBS Today, The gig economy is much smaller than many people thought, 7 June 2018, https://www.cbsnews.com/news/the-gig-economy-freelance-jobs-is-smaller-than-many-people-thought/