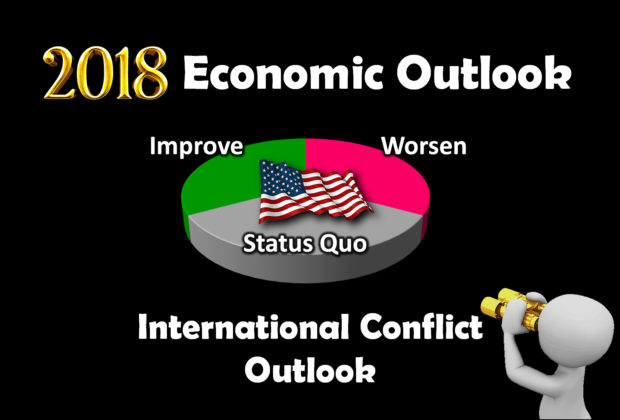 The Jobenomics 2018 U.S. Economic Outlook predicts an equal probability for economic improvement, maintaining the status quo or an economic slowdown in 2018.  This assessment is based on a detailed analysis of six strategic considerations: Economy, Business, Labor Force, Governance, Domestic Disruptors and International Disruptors.  This posting deals with the economic impact of potential international conflicts and Black Swan events.  The entire 60-Page Jobenomics 2018 U.S. Economic Outlook report can be downloaded free from the Jobenomics Library.

The U.S. economy is subject to international competition and disruption.  While these factors are often hard to calculate, they are essential considerations in forecasting.  Regarding the potential for global disruption, the Jobenomics 2018 U.S. Economy Outlook ranges from maintaining the status quo to spiraling out of control given the volatility in the world affairs.  2017 was a vexing year, and 2018 may be equally or more distressing.

As reported by BloombergPolitics, business and world leaders gathered at the 2018 World Economic Forum in Davos in January 2018 predict increasing global disruption.  While the current global economic situation has improved, 90% of the Davos elite expect political and trade clashes.  80% foresee increased conflict and war.  Moreover, the “deteriorating geopolitical landscape” is growing the threat of large-scale cyber attacks.  In response to devastating massive cyber attacks, the U.S. Pentagon is considering a strategy of nuclear retaliation, as reported by the New York Times.  While these reports tend to be apocalyptic, 2018 portends to be a turbulent year.  Turbulence leads to uncertainty.  Uncertainty dampens economic growth.

Conflicts/Wars/Cyber/Extremism/Terrorism.  The list of international wars, conflicts, cyber intrusions, and terrorist attacks are well known to anyone who watches the news.  The preeminent question is whether or not this malevolence will cause a major financial downturn or crisis in the United States in 2018?  From a Jobenomics standpoint, the answer is most likely yes.

The United States traditionally experiences three financial crises per decade, half of which turn into recessions.  So far this decade, foreign economic crises in the Eurozone, Venezuela, Russia, Ukraine, and Brazil were not contagious.  Foreign wars and conflicts also had a relatively little negative impact on the overall U.S. economy.  Consequently, the U.S. economy experienced 87-consecutive months of labor force expansion in a slow-growing economy.

For the most of this decade, U.S. foreign policy was one of strategic patience and minimalist intervention that enabled the U.S. economy to prosper in a relative vacuum.  Unfortunately, passivity emboldened U.S. adversaries.  China constructed island bases in the Pacific, Russia annexed Crimea, the Shia Crescent is spreading, Syria is in ruins, Iran and North Korea are building nukes, and terrorists are becoming much more sophisticated.

With the election of President Trump, the era of strategic patience ended and a new period of strategic engagement has started.  While President Obama retreated from the only red-line he drew, President Trump paints numerous red lines, most notably with North Korea, Iran, ISIS—the most murderous countries on the planet.  By doing so, he has put the rest of the world on notice.  Whether the world agrees with President Trump’s bold approach to in-your-face diplomacy, the die is cast.  The next move is with our adversaries.

Most military planners anticipate that the next move will entail some form of asymmetrical warfare since engaging U.S. armed forces in conventional combat is a losing proposition.

Today, terrorism is the most malevolent form of asymmetrical warfare.  While terrorist attacks have been psychologically devastating, the number of fatalities and economic impact has been rather low in America.  According to CATO Institute, a Washington-based think tank, only 3,432 Americans were killed by terrorists over the last 30-years.  While every life is precious, this number pales in significance to our national murder rate. In 2016, an estimated 17,250 cases of murder and non-negligent manslaughter occurred nationwide as calculated by Statista.

Tomorrow, perhaps as early as 2018, the most malevolent form of asymmetrical warfare is likely to be cyberwar or its close cousin, EMP (electromagnetic pulse).  Cyber espionage, cyber intrusion, and cyber attacks are increasingly disruptive but relatively non-lethal.  However, this could soon change if deployed on a massive scale to take down the U.S. power grid or critical infrastructure.  Cyberwarfare tampers or destroys data.  EMP fries circuits that carry data.  The world’s arch-terrorist, Kim Jong-un, already possesses cyber and EMP weapons of mass destruction.

In May 2017, a North Korean WannaCry ransomware attack crippled more than 230,000 computers in America and across the world.  While WannaCry’s damage was limited to billions of dollars, this type of attack could be a precursor for a very destructive cyberwar.  Cyberwars consist of multiple attacks against critical infrastructure and populated soft-targets, such as chemical plants, pipelines, rail systems, dams, bio labs, and major public venues.  Kim Jong-un’s so-called “nuclear button” could trigger a stealt cyberwar as a prelude to a potential nuclear attack if needed.

As trumpeted by Kim on 19 April 2017, he is ready to reduce American military forces in South Korea and the U.S. mainland “to ashes” by a “super-mighty preemptive strike.”  A Super-EMP weapon is a likely method of reducing the American mainland to ashes, according to the United States EMP Commission, a commission created by the United States Congress in 2001.  The Commission’s 2017 Report states that “a Super-EMP weapon could be relatively small and lightweight.” A North Korean long-range missile is capable of carrying a crude lightweight Super-EMP weapon.  Even more worrisome, Super-EMP weapons can be launched or airlifted from freighters, submarines (North Korea has a fleet of about 70 warships), a balloon or satellite.

Quoting the EMP Commission, “A balloon-lofted warhead detonated at 30 kilometers altitude could blackout the Eastern Electric Power Grid that supports most of the population and generates 75 percent of U.S. electricity.”  On 8 February 2016, the North Koreans launched their first of many satellites, many of which are now orbiting over the continental United States.  Again quoting the 2017 EMP Commission report, “an EMP attack might be made by a North Korean satellite, right now.”  A North Korean Super-EMP satellite attack would cause a biblical-level of carnage.  A national blackout would likely last many months, shutting down vital communication and transportation systems.  Few Americans would survive (or would want to survive) in the primitive and subsistence conditions inflicted by a “super-mighty preemptive strike.”

On 25 January 2018, 70 scientists from the U.S.-based Bulletin of the Atomic Scientists moved the “Doomsday Clock” closer to midnight by 30 seconds in a statement that the world is now closer to the point of annihilation than at the height of the Cold War in 1953.  It is now two minutes to midnight.  2018 portends to be a frightening year.

Black Swans.  A black swan is an event that comes as a surprise and has an impact that is recognized mainly after the fact.  While impossible to foretell, Jobenomics speculates that a Black Swan could arrive anytime soon given the state of world affairs.

In military parlance, Black Swans are unknown-unknowns (unk-unks).  Unk-unks have been a part of the U.S. wargaming community since the early 1980s.  Unk-unks acknowledge possibilities not conceived at a given point in time.  The 9/11 Trade Tower attack was an unk-unk.  The Eyjafjallajökull Icelandic volcano was an unk-unk that cost the airline industry three years of profits.  The BP oil spill is another unk-unk.  The 2008 sub-prime mortgage crisis that nearly brought the U.S. financial system to the brink of collapse also serves as an excellent example of a Black Swan unk-unk.

It is not unusual for lives of individuals, as well as the future of nations, to pivot on an unanticipated or unintended Black Swan event.  Response guides for Black Swans cannot be written but only nervously anticipated.  According to an ancient proverb, the veil that shields us from the future is mercifully woven by angels.  Sadly, there is no shield from Black Swans that can turn our economy and livelihoods upside down.

Black Swans can be a curse for some and a blessing for others.  World War II destroyed the economies of Europe and Asia, leaving the United States a global superpower possessing over half of the world’s GDP.  According to World Bank data, by 1960, U.S. percent of world GDP decreased to 39% ($0.5T versus $1.4T).  U.S. to world GDP has now slipped to 25% ($18.6T versus $75.9T, 2016 data).  While U.S. GDP maintains a significant lead over other nations, China is now the new global leader regarding GDP Purchasing Power Parity ($19.6T China versus $17.2T United States in 2011 baseline dollars).

While the U.S. economy is still the world’s most influential, it is not as dominant as it used to be.  In addition to decreasing GDP and purchasing power, U.S. economic power eroded due to its high level of indebtedness.  Over the last three decades, the United States evolved from the world’s largest creditor nation to the world’s biggest debtor nation.  The combined effect of declining U.S.-world GDP ratio and increasing debt gives other countries a much louder voice in world affairs.  New players on the global stage will be a welcome change, assuming these players are not plotting ways to destroy the United States.

Individuals and institutions that support globalization assert that shared global governance will promote global prosperity.  Jobenomics believes that this worldview is only partly correct.  Shared responsibility is fine as long as all involved are concerned about the common good.

America must be wary to avoid being upended by malevolent forces.  America’s domestic U.S. political, cultural and racial divide makes our nation even more vulnerable to malicious intent.  Our divided nation encourages pro-active actions from both internal and external actors who are opposed to the United States, the American way of life, and America’s long-standing economic and cultural influence.

A global Black Swan could precipitate a reset in the global balance of power.  A global reset could spawn regional Black Swans that would invoke an about-face in U.S economic and cultural hegemony that has existed over the last half-century.  By definition, there is no way to prevent a Black Swan.  However, the United States can mitigate the impact of a moderate Black Swan event by strengthening our economy and unifying our people.