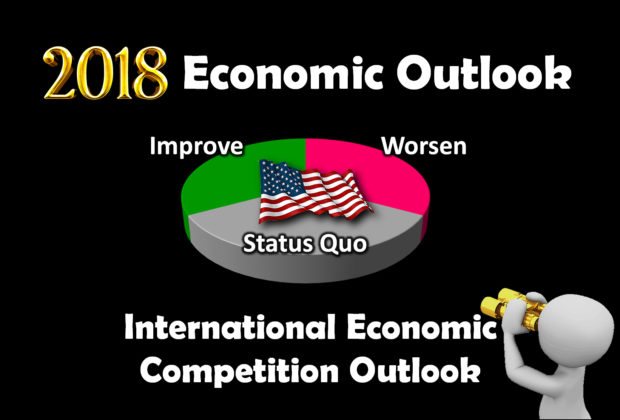 The Jobenomics 2018 U.S. Economic Outlook predicts an equal probability for economic improvement, maintaining the status quo or an economic slowdown in 2018.   This assessment is based on a detailed analysis of six strategic considerations: Economy, Business, Labor Force, Governance, Domestic Disruptors and International Disruptors.  This posting deals with the economic impact of potential Economic Competition with emphasis on China’s quest for dominance in the emerging digital economy.  The entire 60-Page Jobenomics 2018 U.S. Economic Outlook report can be downloaded free from the Jobenomics Library.

The U.S. economy is subject to international competition and disruption.  While these factors are often hard to calculate, they are essential considerations in forecasting.  Regarding the potential for global disruption, the Jobenomics 2018 U.S. Economy Outlook ranges from maintaining the status quo to spiraling out of control given the volatility in the world and spiritual affairs.  2017 was a vexing year, and 2018 may be equally or more distressing.

The world appears to be on a collision course in many realms.  The four elements within the global balance-of-power (political, economic, military, social/religious) are all in a state of flux not experienced in modern history.  As a result, an expansive group of movie producers, investigative journalists, strategic planners, wargamers, conspiracists, religionists, and eschatologists now have the grist for prognostications that are potentially apocalyptic in proportion.

As reported by BloombergPolitics, business and world leaders gathered at the 2018 World Economic Forum in Davos in January 2018 predict increasing global disruption.  While the current global economic situation has improved, 90% of the Davos elite expect political and trade clashes.  80% foresee increased conflict and war.  Moreover, the “deteriorating geopolitical landscape” is growing the threat of large-scale cyber attacks.  In response to devastating massive cyber attacks, the U.S. Pentagon is considering a strategy of nuclear retaliation, as reported by the New York Times.  While these reports tend to be apocalyptic, 2018 portends to be a turbulent year.  Turbulence leads to uncertainty.  Uncertainty dampens economic growth.

As opposed to military might, economic power has become the weapon of choice as evidenced by China’s quest for supremacy in the emerging digital economy that is projected to be the size of the traditional economy within a decade or two.

In 2017, China introduced a new five-year economic plan.  2018 will be the year of the plan’s execution.  According to an analysis of China’s five-year plan by The U.S.-China Economic and Security Review Commission, a congressional commission of the U.S. government, the Chinese program seeks “to create new Chinese competitors that will be able to challenge U.S. companies abroad while slowly closing market opportunities in China for the U.S. and other foreign firms.”  While U.S. government concentrates on recapturing its lost manufacturing capability, China focuses on dominating next-gen technologies and the emerging digital economy.

Per Jobenomics’ special report on China, entitled China’s Digital Economy Quest, China represents the most significant U.S. near-peer competitor for global dominance in the emerging digital economy.  China’s digital economy quest has two primary goals.  The primary goal is to develop millions of e-commerce micro-businesses to elevate hundreds of millions of rural poor from poverty.  The second less-altruistic goal is global economic hegemony in the digital domain.  China’s transition from a physical (mainly manufacturing) economy to a digital economy is both rapid and impressive.  Moreover, Jobenomics contends that China’s unified digital economy vision and public-private partnership is more mature and competitive than America’s business-as-usual approach.

Today, there are more than 750 million netizens in China—greater than twice the size of the United States total population.  From a digital economy standpoint, China is more advanced than the United States in e-commerce, mobile commerce, social media, online payments, and fintech (financial technology), according to data from Nielsen, a preeminent global measurement and data analytics company, the World Economic Forum, and other distinguished organizations.

E-commerce is the growth engine for the Chinese economy with 47% of Chinese consumers shifting expenditures from offline to online.  China is the world leader in mobile-commerce.  96% of all Chinese netizens are habitual smartphone users of the internet.  The same is true for social media usage.  902 million daily users log into WeChat (multi-purpose social media mobile application with more applications and worth more than Facebook) to communicate, play games, pay bills, order goods and services, transfer money, make video calls, order food, read the news, and book appointments.  Almost half of the Chinese netizens rely on mobile wallets to make online payments compared to U.S. consumers that are still wedded to credit cards.  Fintech is an emerging service sector where China truly excels in banking, transacting business, conducting trade, capital markets, and cryptocurrency.

According to The Wall Street Journal, “the future of banking is in China.”  Jobenomics not only agrees but anticipates that the degree of digital disruption caused by the Chinese could easily redefine the way the world does business.  2018 will be a landmark year to see if the world also agrees and commences an economic pivot away from the United States towards China.

China’s expansive One Belt One Road trade and diplomatic initiative is one of many Chinese initiatives designed to facilitate Eurasian connectivity and cooperation with China.  In contrast, the United States is withdrawing from multilateral trade relationships in favor of bilateral agreements.  Which strategy will win is in question.

For the Chinese to prosper economically, they have to attract more consumers.  To maintain economic prosperity, the United States must mitigate trade deficits that drained U.S. coffers for decades.  One thing is for sure. Both China and the United States will make it harder for nations to sit on the fence—the economic equivalent of “if you are not for me, then you are against me.”

The Center for Global Enterprise calculates that China and the United States dominate the digital economy with 64 and 63 major platform companies respectfully.  Platform companies leverage their networks to mobilize their billions of users.  American and Chinese platform companies have user bases on par with the populations of the world’s largest countries.  Due to their global reach and access to 3.4 billion active global internet users, major platform companies are now more powerful and formidable than the most prominent industrial and manufacturing conglomerates.

America is blessed to be the home of platform giants like Apple, Facebook, Google, Amazon, Microsoft, and eBay.  While U.S. platform giants are making technological advancements in communication, media and entertainment, China and other foreign countries in Asia and Europe are using U.S. technology to develop their labor forces and economies to a much higher degree than in the United States.  As corporate citizens, U.S. platform companies need to assume a much more significant role in developing U.S. companies to compete and prosper in the emerging global digital economy.

With the proper focus and leadership from Washington and corporate America, a national digital economy initiative could create millions of new small business and tens of millions of jobs.  Left unattended, unstructured and unplanned, digital enterprises and jobs will flow to foreign entities.  Over the last three decades, the United States allowed the erosion of its manufacturing base and outsourced jobs overseas.  We must ensure that this folly does not happen in upcoming decades.

Standby for the next postings in the International Disruptors series, or download the entire 60-Page Jobenomics 2018 U.S. Economic Outlook at the Jobenomics Library.