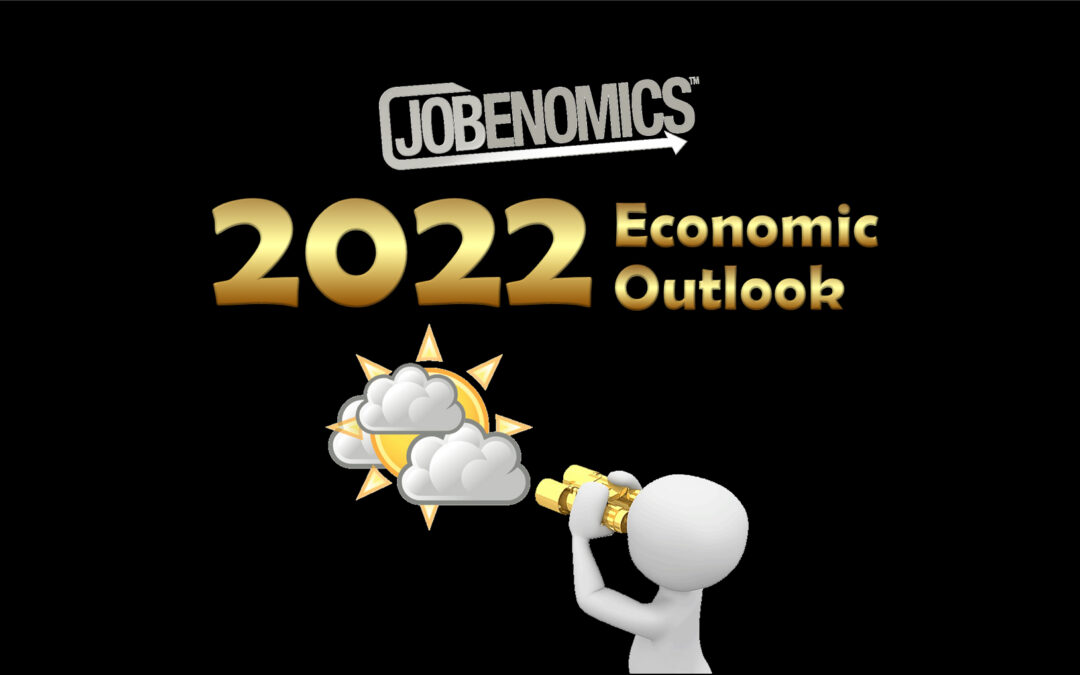 Most Americans are ready to put the pandemic in their rearview mirror and look forward to a new year that will provide a sense of normalcy.  Unfortunately, the coronavirus was more destructive in 2021 than in 2020.  During the first week of 2022, the COVID Grim Reaper claimed almost 9,000 Americans.  Advances in vaccines, prophylactics, and pharmaceuticals will likely mitigate the pandemic in 2022 to allow us to rebuild our ravaged economy and labor force.  This pandemic provides a unique opportunity to create a more equitable society by providing a path to self-sufficiency and independence.  Over the last two years, Congress enacted $17 trillion in new healthcare, social, climate, and infrastructure spending.  Over $7 trillion of these funds remains uncommitted.  Properly planned, these funds can mass-produce locally-owned and operated startup businesses in under-resourced communities.

Speaker Pelosi allocated $200 million of these funds to revitalize the Presidio of San Francisco (a 1,480 acre public and commercial park in her district).  Based on this precedent, Jobenomics is working with legislators to develop actionable community development plans that will produce thousands of startup businesses and the millions of jobs needed to restore the U.S. labor force that is still 4 million jobs below the start of the pandemic.

From a Jobenomics perspective, the following chart represents the big picture on the engine of the U.S. economy, the private sector workforce. 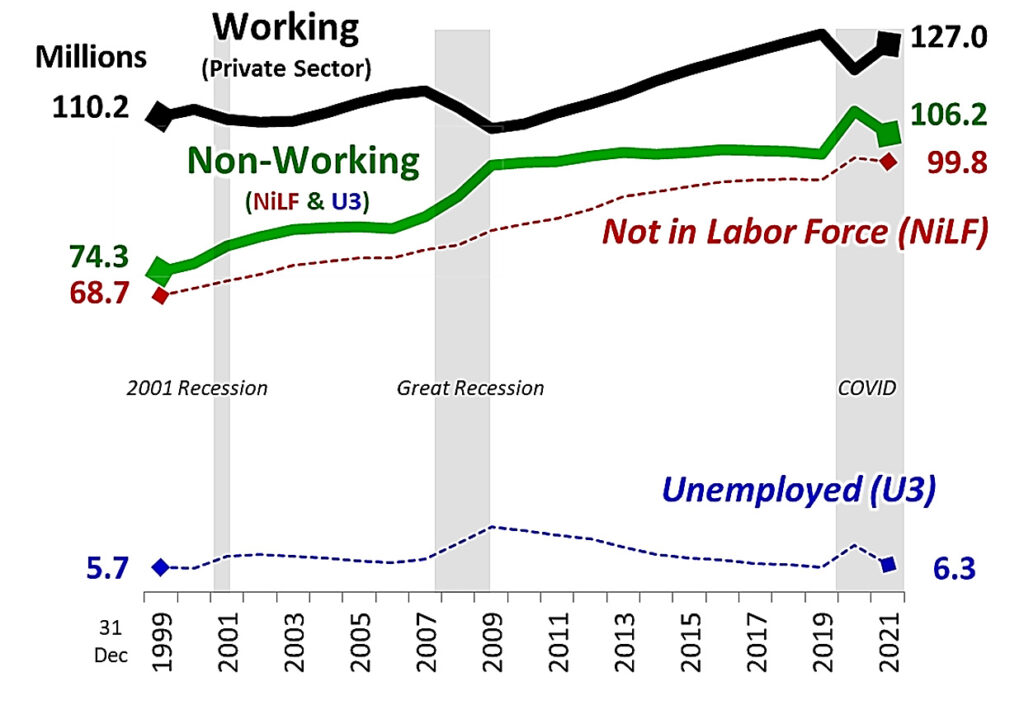 Since 2000, the U.S. Bureau of Labor Statistics (BLS) Not in Labor Force category (NiLF, adults capable of working but not looking) has grown by 45% compared to 15% private sector employment growth and unemployment growth of 12%.  The primary reasons for NiLF growth are lack of skills development and an increasingly generous welfare system.  According to the BLS, of the 100 million people in the NiLF cadre, 95 million are no longer looking and “do not want a job now.”  From a Jobenomics standpoint, reversing the growth of these sidelined workers is America’s top labor force challenge.

In 2021, the Biden Administration helped create 6 million new jobs (5,996,000 in the private sector and 452,000 in government for a total of 6,448,000 jobs).  The number of employed was by 4.5 million people, and the unemployment rate lowered to 3.9%.  In addition, the Administration slightly reduced the number of people (717,000) registered in the BLS Not in Labor Force category.  These accomplishments are noteworthy but insufficient since the United States workforce is 3,600,000 workers short of pre-pandemic levels, and the rate of new job growth is slowing.

The President’s recent remarks about lowering the unemployment rate to 3.9% are factually correct but misleading.  To be classified as unemployed, one must be actively looking for work.  Few Americans understand that it is theoretically possible for the United States to have a 0% unemployment rate if all unemployed people just quit looking for jobs and joined those in the Not in Labor Force category.  Under the current BLS survey, if unemployed respondents answered “no” to any of the following four survey questions, the United States can have an instantaneous zero rate of unemployment.

Consequently, the “official” unemployment rate is a manipulatable metric and an inconsequential macroeconomic indicator of the strength of the U.S. economy.

The latest BLS Employment Situation Summary (published 7 January 2022) reports that the United States created only 199,000 new jobs in December 2021, which is well below average and a disappointing start for the new year.  Hopefully, the remainder of Q1 2022 will be more promising, and by the end of Q2 2020, the United States will recover all of the 22,362,000 jobs lost since the onset of the pandemic. 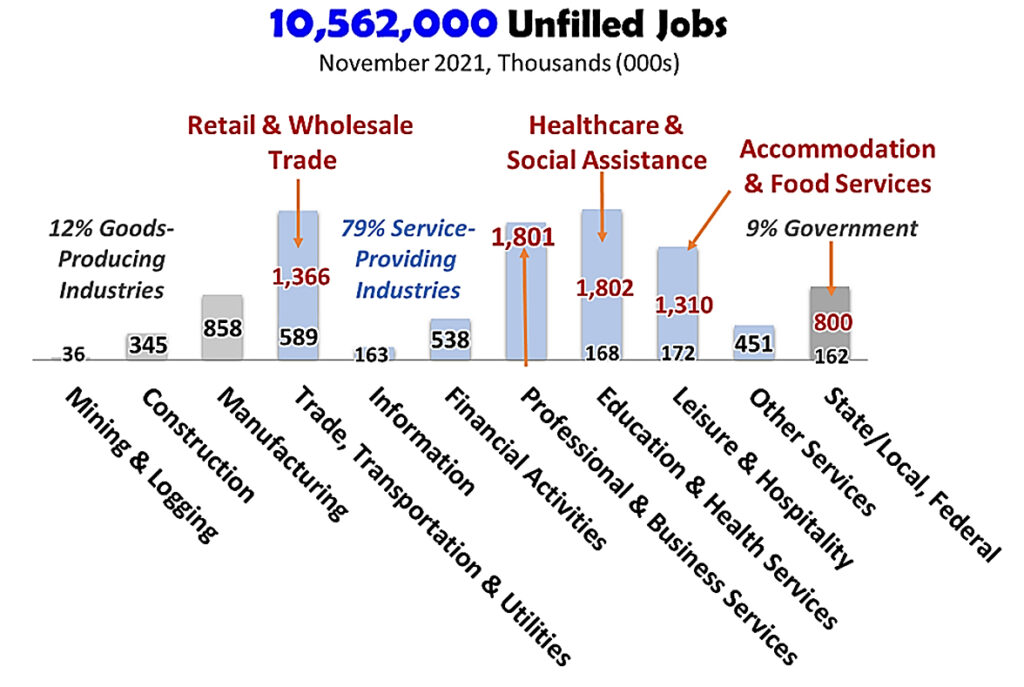 This table shows the number of jobs in the industrial and government sectors covered by the BLS.  In November (latest data), there were 10,562,000 open U.S. job positions, down slightly from the historical high of 11,096,000 in July 2021.  Over the last year, job openings soared 56%, from 6,752,000 vacancies on 1 January 2021 to 10,562,000 on 1 January 2022.  Moreover, it is essential to note that there are almost twice as many open jobs as unemployed people (6,319,000 unemployed versus 10,562,000 job vacancies).  From a Jobenomics standpoint, few politicians in Washington (both parties) understand that most job vacancies are due to the lack of job skills, especially digital skills needed for the fast-growing digital domain.

According to the 2020 National Skills Coalition, only 33% of U.S. workers have advanced digital skills to work in the digital domain effectively.  While it might seem that younger workers would be uniformly digitally literate, 43% of U.S. workers aged 16 to 34 have no or limited digital skills.  Jobenomics’ 170-page book, entitled Jobenomics Digital Academy & Business Generator, addresses the imperative of skills-based training for the digital economy, growing twenty times faster than the industrial economy.  This book also discusses China’s quest for digital supremacy and hegemonic power over the United States in all aspects of the digital world.

The most recent U.S. Consumer Price Index Summary shows that November 2020 experienced the highest monthly year-over-year increase in inflation since the turn of the Century.  Over the last 12 months, all items in the CPI increased 6.8% before seasonal adjustment.  Within the all items category, energy rose at 33.3%, followed by commodities at 9.4%, food at 6.1%, and services at 3.5%.  Since increased energy prices tend to flow down to all consumer products over time, the prices of all goods could increase substantially in the year ahead.  Current supply chain issues and labor shortages exacerbate price increases over the inflationary pressures.

Based on Bloomberg consensus data, consumer prices likely will surge by 7.1% in December.  In 2022, Bloomberg’s economists project that inflation will fall back to 3.0% by year’s end.  Jobenomics disagrees with this optimistic projection given explosive CPI growth in 2021, skyrocketing rise in the Producer Price Index, and the persistent nature of the pandemic.

Since the onset of the pandemic, Jobenomics reported on COVID-19 effects on the U.S. economy and the labor force.  In January 2021, the Jobenomics blog predicted that 2021 would be worse than 2020.  Unfortunately, this prediction came through due to inconsistent government policies from Administration to Administration.

CDC Director Walensky recently stated that the pandemic is far from over, considering the new variants and breakthrough cases (in vaccinated people).  During the first week (7-days) in January 2022, the United States recorded 8,943 deaths.  On an annual basis, this number equates to 465,036 deaths.  Even if this death rate declined to zero by midyear, a total of 120,731 lives would be lost, generating an adverse economic and labor force impact.  Worse yet, the political implications to the Biden Administration could even be worse.  COVID contributed to the downfall of the Trump Administration. 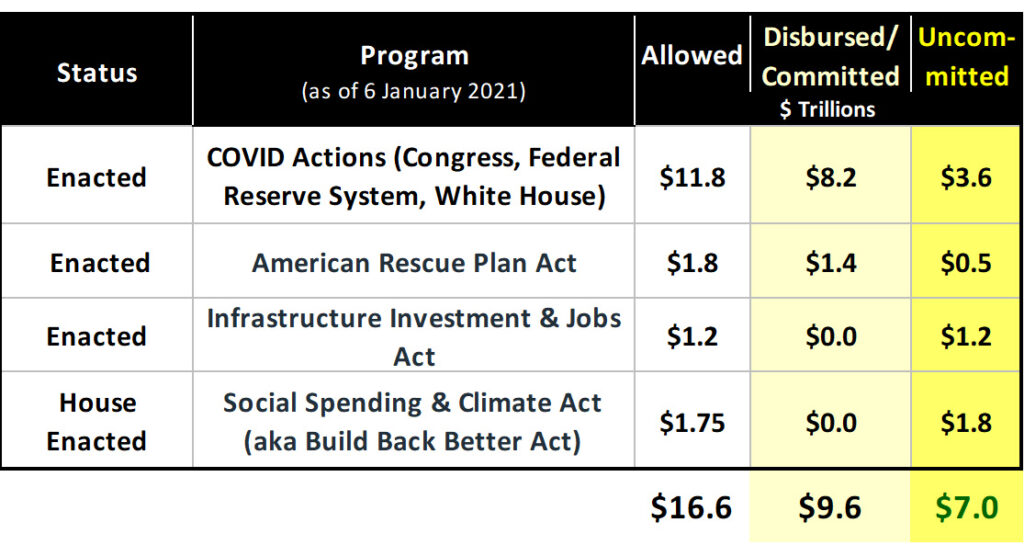 Over the last two years, to combat the rages of the pandemic, Congress enacted $16.6 trillion in new healthcare, social, climate, and infrastructure spending.  Over $7 trillion of these funds remains uncommitted.  If this $7.0 trillion were equally divided amongst the 3,243 U.S. counties, theoretically, each county would receive up to $2.2 billion.  Properly planned, these funds can mass-produce locally-owned and operated startup businesses in under-resourced communities.

Speaker Pelosi set a precedent by adding a $200 million line item in Build Back Better Act for Presidio park development in her district.  The Presidio of San Francisco is an aging 1,480-acre mixed-use, for-profit, commercial & public park in San Francisco.  Jobenomics asserts that this level of community development is warranted since it results in startup and scale-up business development.  Correspondingly, Jobenomics is working with other legislators to develop line items for underserved and under-resourced communities.

From a national standpoint, the President’s Build Back Better plan will only work if we actually build something.  Jobs don’t create jobs.  Businesses, mainly small businesses, produce the majority of new jobs.  According to the Kauffman Foundation, a leading U.S. institution on entrepreneurism, “government policies that look to big business for job creation are doomed to failure because they are based on unrealistic employment growth models.  It’s not just net job creation that startups dominate.  On average, one-year-old firms create nearly 1,000,000 jobs, while ten-year-old firms generate 300,000.  The notion that firms bulk up as they age is, in the aggregate, not supported by data.”  Consequently, the Build Back Better plan will only succeed if the U.S. government limits its fish-giving programs and maximizes developing self-sustaining fish industries in underserved communities.