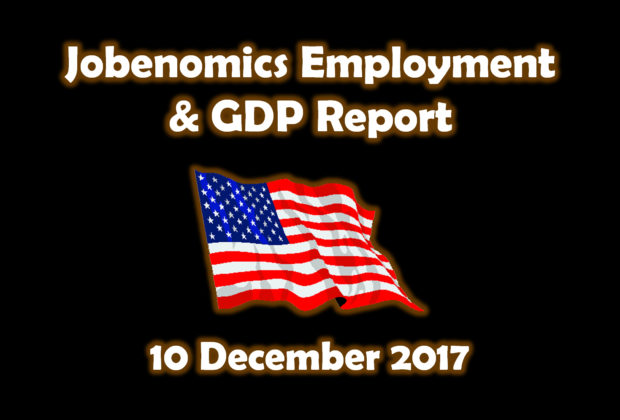 Executive Summary.   The Trump Administration’s bold economic and job creation vision (i.e., sustained 4% GDP growth and 25 million new jobs) is progressing as planned, albeit with some bumps in the road.  As addressed in this analysis, recent employment and economic reports present a positive but mixed picture on President Trump’s progress during his first 11-months in office. Download free 13-page report.

On the positive side of the economic and labor force ledger, the Bureau of Labor statistics reported that 228,000 new jobs were created in November 2017.  To put this number into perspective, 250,000 new jobs per month is the standard accepted by most economists to compensate for downturns and sustain robust economic growth.  This standard has been exceeded 19-times during the 100-months since the end of the Great Recession.  While President Trump’s job creation rate has been good, it has yet to break the 250,000 job per month threshold.  Positive news was reported by the Bureau of Economic Analysis regarding GDP growth.  Per the BEA’s second estimate, U.S. GDP growth for Q3 2017 was 3.3%, up from their advanced estimate of 3.0%.  Of the 33-quarters since the end of the Great Recession, only 6-quarters exceeded 3.3%.

On the negative side, the number of sidelined citizens categorized as “not-in-the-labor-force” increased by 35,000, following an increase of 968,000 people in October—the largest number of voluntary workforce departures since January 2012.  While the unemployment rate remained unchanged at 4.1%, 90,000 additional citizens were reported as officially unemployed over the previous month.  Also on the negative side of the ledger, small businesses continue to struggle with micro-business (1-19 employees) job creation down substantially since its peak in 2011.  In April 2011, micro-businesses created 103,000 new jobs.  Last month, they only created 14,000.  Jobenomics is hopeful that the proposed Tax Cuts and Jobs Act will stimulate startup and small business growth via the reduction of the corporate tax rate on 30 million incorporated and unincorporated small businesses.

From a Jobenomics standpoint, the Trump Administration is making significant strides towards improving the economy and labor force.  However, the Administration is likely to fall short of its goal of sustained 4% GDP growth and 25 million new jobs if it does not pay more attention to improving the rate of startup businesses and expanding the 30 million existing small businesses.  Small business is the primary employer and creator of American jobs.  While the Administration’s big business initiatives are laudable, large corporations will continue to use the bulk of their profits to make money on money—such as mergers and acquisitions—as opposed to increasing the size and prosperity of the U.S. labor force.  While it is true that manufacturing is the anchor tenant of the American economy, manufacturing should not be perceived as either an engine of employment or wage growth area due the increased use of advanced technology to automate the workforce and dissecting traditional full-time jobs into part-time and task-oriented work.