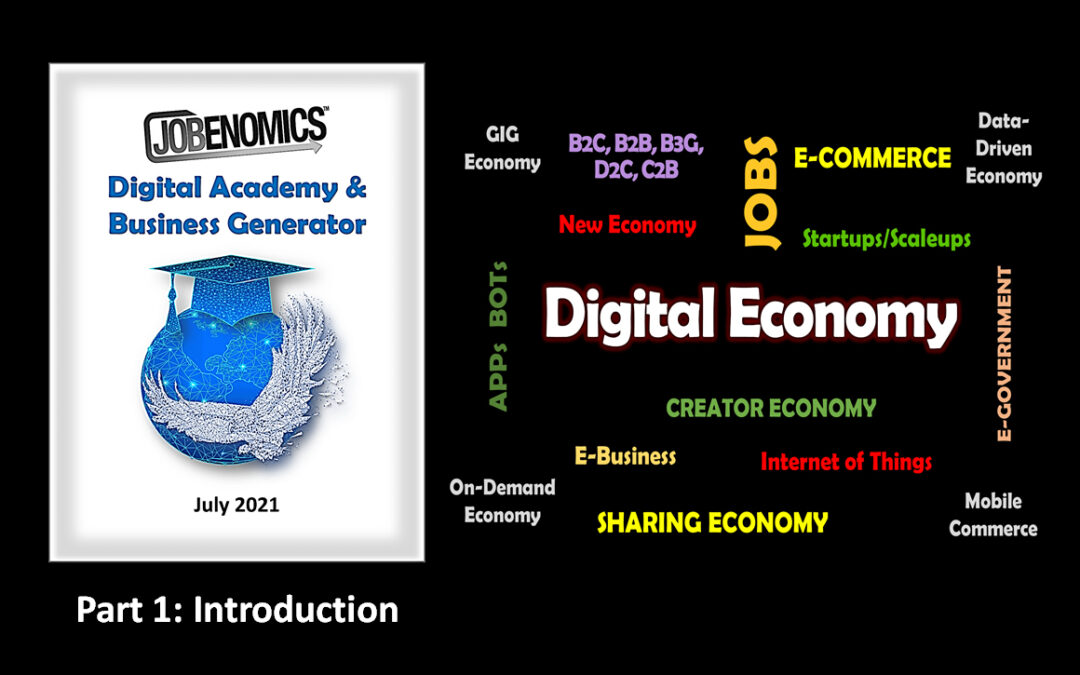 Digital startups are ten times easier to create than traditional brick-and-mortar startups.  They are also significantly less expensive to start since the bulk of their infrastructure is in the cloud, and support staff is available as needed online.  Consequently, the digital economy offers a unique opportunity to mass-produce jobs and startup businesses.  Affordable Jobenomics Digital Academy & Business Generators can generate well-paying digital careers in every city, town, community, or neighborhood that wants to prioritize locally-owned business creation.  Since only one-third of the U.S. workforce has the digital skills to succeed in the digital domain, the need is great.

The digital economy will create tens of millions of jobs with proper focus and leadership.  Communities with a laissez-faire approach to the digital age’s transformative power will see their economy, business base, and labor force erode.

There are at least nine unique but intertwined subcategories that define the emerging Digital Economy:

The DTR is not ITR 2.0.  While both are revolutionary, the DTR is significantly more disruptive than its earlier and benign ITR cousin.  ITR tools assist and enhance humanity’s productivity.  DTR’s artificially intelligent agents and bots not only augment but replace human endeavor.  The DTR represents a perfect storm of technologies that emulate human form, attributes, and intelligence.  The DTR will create 10s of millions of net new American jobs.  On the other hand, numerous studies forecast that the DTR will eliminate about half of all American jobs within the next two decades.

Part 2.  Digital Literacy.   (Caption) The United States workforce is woefully ill-equipped to perform and compete effectively in the digital domain.  Although most working-age adults use the internet every day, they lack the skills to meet today’s growing demand for trained digital professionals.