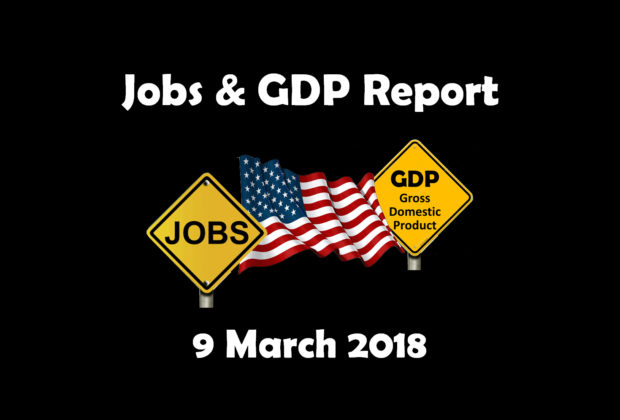 U.S. labor force added 313,000 new jobs in February, which is positive news regarding President Trump’s bold job creation goal of creating 25 million new jobs within ten years.  The President also wants to double GDP growth to 4%.  Regrettably, after two-quarters of GDP growth over 3%, U.S. GDP is again hovering around 2.5% and is forecast to remain at this level through Q1 2018.  Download complete 13-page report in the Jobenomics Library.

In today’s highly-charged political environment, what people really want to know is how today’s president is performing against past presidents.  As color-coded by political party, of the twelve presidents since WWII, President Trump’s average monthly job creation rate is 195,714, which puts him in third-place following President’s Carter and Clinton.

From an Administration standpoint,

A 250,000 jobs per month threshold is a reasonable standard to use to provide a safeguard against future downturns or minor recessions.  During the recent 89-month run of consecutive job gains, the United States exceeded the 250,000 job threshold 22-times or nearly one out of every four months.

As a note of caution, the employment statistics reported above were “seasonally adjusted” by the BLS.  Seasonal adjustment is a statistical technique that attempts to measure and remove the influences of predictable seasonal patterns to reveal how employment and unemployment change from month to month.

About Jobenomics:  Jobenomics deals with the economics of business and job creation.  The non-partisan Jobenomics National Grassroots Movement’s goal is to facilitate an environment that will create 20 million net new middle-class U.S. jobs within a decade.  The Movement has a following of an estimated 20 million people.  The Jobenomics website contains numerous books and material on how to mass-produce small business and jobs as well as valuable content on economic and industry trends. For more information see https://jobenomics.com/.