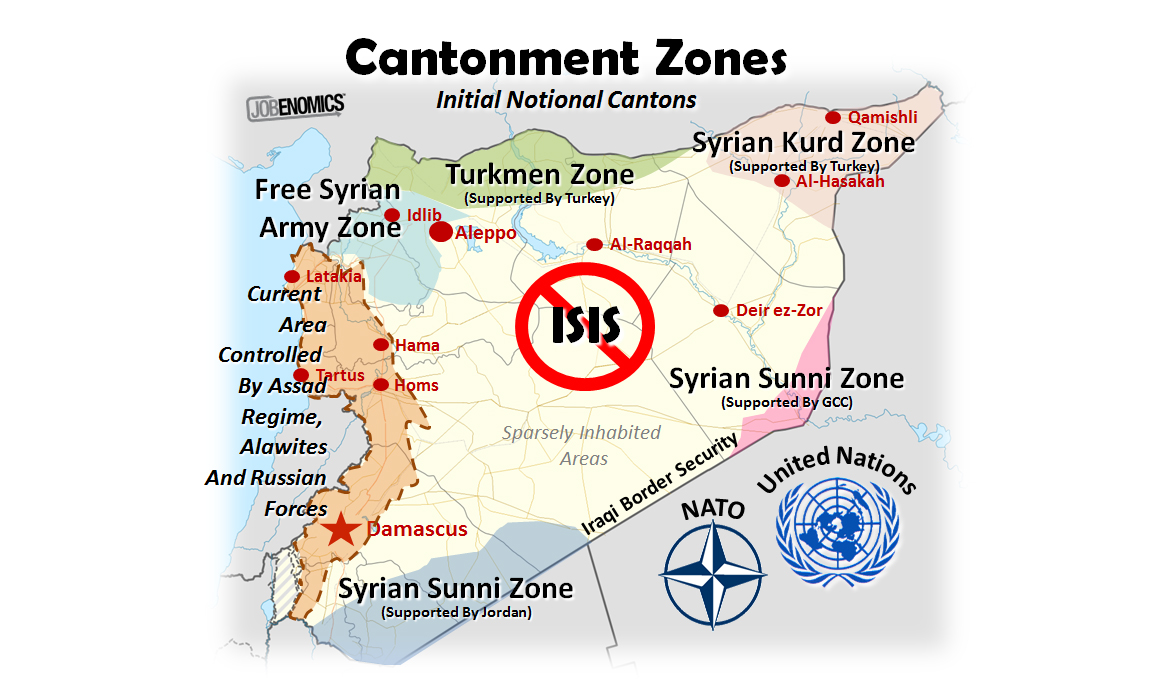 Executive Summary.  The Syrian crisis presents three separate challenges to the international community: (1) dealing with the Russian-backed Assad regime that appears to be willing to escalate an internal civilian war to a regional conflict, (2) destroying the world’s largest and best financed terrorist organization that has global reach via modern network technology, and (3) resolving the blight of 7.6 million displaced Syrians, repatriating 4.3 million registered refugees, and reducing the  pipeline of millions of emigres who are overwhelming neighboring countries and many parts of Europe.

The Jobenomics Cantonment Concept focuses on the third challenge (3) by providing security and economic development opportunities for victims of the Syrian conflict.  The victimized include impoverished civilians, displaced persons and refugees.  The primary goal of cantoning is to rehabilitate and assist the afflicted to resume productive lives. 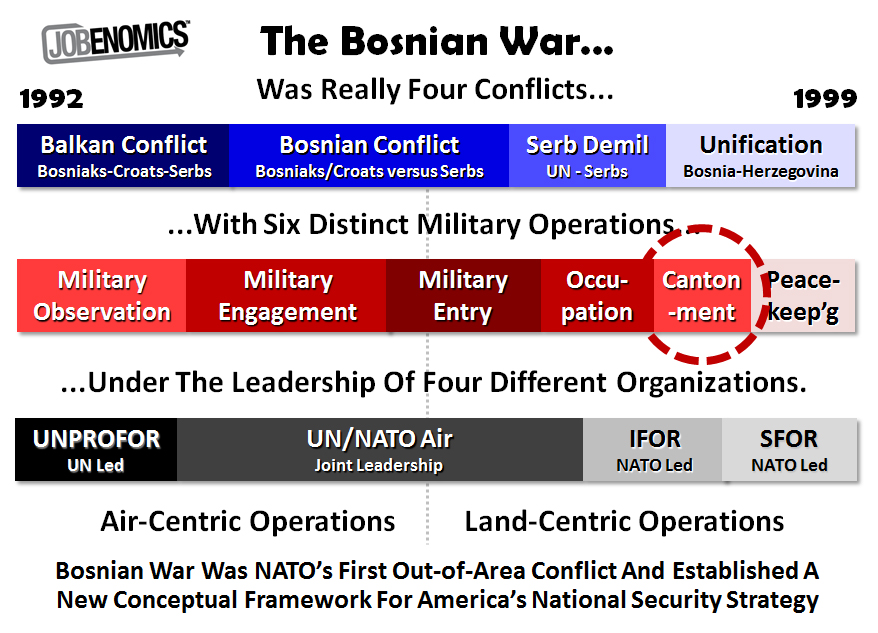 A canton is an administrative subdivision of a country.  Cantons exist in Europe, Latin America and Asia.  Formation of modern-day cantons originated in NATO’s Cantonment Phase during the Bosnian War.  Ten cantons in the Federation of Bosnia and Herzegovina now provide autonomy and opportunity for Bosniaks and Croats once victimized by war.  In 1993, the U.N. Protection Force (UNPROFOR) was instituted in Bosnia and Herzegovina to provide badly needed aid, protect humanitarian relief convoys and implement safe havens and weapon exclusion zones.  In 1995, UNPROFOR forces were reflagged to NATO that assumed command, commenced military operations and instituted cantonments.  Now is the time, prior to the end of Syrian hostilities, to implement a Syrian cantonment strategy similar to the one accomplished by NATO in Bosnia. Jobenomics asserts that the best way to repair the devastation in Syria involves implementing a cantonment business generator concept to systematically incubate and mass-produce small businesses that will employ millions of net new Syrian workers who are dedicated to restoring productive human endeavor, reunifying families, rehabilitating combatants and reconstructing sustainable Syrian communities.  Without an actionable and measurable economic development strategy, international intervention efforts will eventually fail—leaving a vacuum that is likely to be filled with anti-social ideologies and crime.  This is the lesson of the Arab Spring, the progenitor of the Syrian and a dozen other conflicts.  Syrian cantons would increase regional stability by reducing the refugee burden on host countries and reducing violence and disorder perpetrated by extremist groups or ideologies.  Cantoning will also serve to isolate and contain the brutal Assad regime and tyrannical so-called Islamic State.

About the Author: Mr. Vollmer specializes in emerging international, national and business initiatives.  Under contract to the US government, he assisted Arab leaders to develop strategies and operational concepts for coalition-building on terrorism.  In this capacity, he developed several hundred US/Arab strategy and policy documents and led a dozen symposia in the Middle East attended by officials in the Arab Gulf, Egypt, Jordan, Europe and the US.  He frequently lectures on the MidEast, Islam and Arabs on the subject of military, economic, cultural and religious engagement.  Mr. Vollmer is also the author of Jobenomics (the book, website and blog), the founder of the Jobenomics National Grassroots movement dedicated to creating 20 million net new American jobs within the next decade, and the leader of a number of Jobenomics global business and job creation initiatives and programs that could greatly help middle-class and financially distressed citizens in the United States as well as countries like Syria.