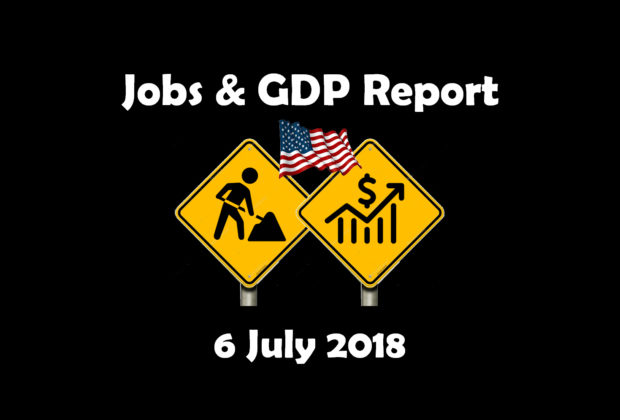 The latest U.S. Bureau of Labor Statistics (BLS) and ADP Research Institute employment reports for May 2018 indicate that the United States created only 213,000 (government and private sector) and 178,000 (private sector only) new jobs respectively.  Both figures are below the job threshold advocated by most economists for robust economic growth.  In addition, the number of unemployed increased by 499,000, which was mitigated by a reduction of 413,000 citizens in the BLS Not-in-Labor-Force category (i.e., people who can work but don’t work).

As reported by the Bureau of Economic Analysis (BEA), during the first year of the Trump Administration, GDP averaged 2.6%.  BEA’s second estimate for Q1 2018 is a disappointing 2.0%.  However, the Federal Bank of Atlanta’s GDP Now projection for Q2 2018 is an optimistic 4.0%, which is largely based on business and consumer optimism due to recent regulatory and tax measures instituted by the Administration.  Consequently, the U.S. economy is not yet gaining sufficient momentum to achieve President Trump’s goal of creating 25 million new jobs and sustained 4% GDP growth over the next decade.

From a Jobenomics standpoint, to achieve President Trump’s 25 million new jobs and sustained 4% GDP growth goal, the Administration must spend more time on small, micro and startup business creation, with emphasis on the emerging digital economy.

Download the free 16-page report in the Jobenomics Library.

About Jobenomics: Jobenomics deals with the economics of business and job creation. The non-partisan Jobenomics National Grassroots Movement’s goal is to facilitate an environment that will create 20 million net new middle-class U.S. jobs within a decade. The Movement has an estimated audience of 30 million people. The Jobenomics website contains numerous books and material on how to mass-produce small business and jobs as well as valuable content on economic and industry trends. For more information see https://jobenomics.com/.