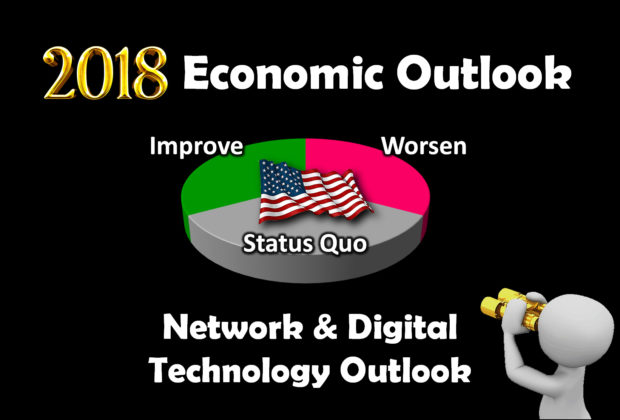 Domestic Disruptors: Technology.  The Jobenomics 2018 U.S. Economic Outlook predicts an equal probability (33.3%) for economic improvement, maintaining the status quo or an economic slowdown in 2018.   This assessment is based on a detailed analysis of six strategic considerations: Economy, Business, Labor Force, Governance, Domestic Disruptors and International Disruptors. This posting deals with the disruption caused by emerging network and digital technologies.  The entire 60-Page Jobenomics 2018 U.S. Economic Outlook report can be downloaded free from the Jobenomics Library.

The rapid advancement of network and digital technologies are improving the livelihoods of skilled workers while the unskilled are falling further and further behind.

Emerging Digital Age technologies are widening the digital divide between workers who are technologically adept and those who have not yet adapted.  This digital divide causes job polarization where the majority of middle-skilled jobs succumb to lower-skilled lower paying jobs, while the high-skilled few advance economically.

The lack of appropriate skills is the primary reason that 6 million unemployed citizens cannot fill the 6 million open jobs in America.  Furthermore, technology-driven job polarization not only produces grave disparities between the skilled and unskilled but also between the full-time workforce and part-time contingent workforce and the rich and poor.

The Industrial Revolution (IR) transformed America from an agricultural-based society to an industrial-based society.  The post-WWII Military Technology Revolution (MTR) underpinned the creation of the economic superpower on the planet.  The 1980s Information Technology Revolution (ITR) ushered in an information age of prosperity and international commerce.  Today, the Network Technology Revolution (NTR) is reshaping the global economy.  Like the IR, MTR, and ITR, the NTR could lead to the creation of millions of U.S. businesses and tens of millions of new American jobs, as well as countless economic and social benefits.  Globally, the NTR’s potential is exponentially higher regarding business, employment, and societal transformation.

The NTR is not ITR 2.0.  While both are revolutionary, the NTR portends to be significantly more intrusive than its earlier and more benign cousin.  ITR tools were designed to assist and enhance humanity’s productivity.  NTR agents are designed not only to augment but replace human endeavor.  The NTR represents a perfect storm of technologies that emulate human form, attributes, and intelligence.

The power behind the NTR is a “perfect storm” of over three dozen transformative network and digital technologies, systems, processes and services.

This perfect storm is revamping existing institutions, businesses, labor forces, economies, and governments; instituting new and different ideas, beliefs, behaviors and cultures; and even changing the very nature of human endeavor and work.

The nascent NTR already has been brilliantly innovative and creatively disruptive.  The more creative the NTR becomes, the more destructive it will be.  From an American outlook, with the proper focus and leadership, the NTR can create millions of new U.S. small businesses and tens of millions of jobs.  Left unattended, unstructured and unplanned, the NTR is likely to render half of the U.S. workforce obsolete over the next several decades.

Over half of America’s front-line fast-food workers require public assistance.  Workers for America’s biggest employer even need public support.  For example, 15% of all Walmart employees are on food stamps.  As a response to the recent Tax Cuts and Jobs Act, Walmart is increasing its starting wage rate for hourly employees in the U.S. to $11 an hour.  While this wage increase will help, it will not eliminate the job polarization challenge.

The revolution in digital and network technology is obsoleting workers via automation, artificial intelligence software agents, and AI-enabled smart machines.  According to a 2013 University of Oxford study on computer automation “about 47% of total U.S. employment is at risk over the next two decades.”  If Oxford’s estimates are correct, out of the 143 million U.S. nonfarm workers, 67 million jobs could be at risk.  Obsolescence will impact all workers, including degreed workers, who have either routine manual or routine cognitive skills.

In cooperation with Citi Global Perspectives & Solutions, Oxford University conducted two other studies in 2015 and 2016 that addressed automation and computerization in greater detail.

The January 2016 Oxford/Citi study took a deep dive into the effects of automation on the rest of the world.  As compared to the United States and other developed economies, emerging and developing economies have a much higher rate of low-skilled workers that are more susceptible to automation.  Oxford/Citi calculates that “between 2002 and 2012, 33 legacy jobs were lost for every new digital job that was created.”

A 2017 study conducted by the Massachusetts Institute of Technology Media Lab measured the “expected job impact from automation” on U.S. 380 cities and towns.  According to MIT, small cities and towns are more likely to lose jobs to larger urban centers that have an abundance of managerial and technical professions, which are less subject to automation from robotics and artificial intelligence.  Large cities also harbor more innovative workers that use cutting-edge technologies.

In conclusion, the rapid advancement of Digital Age technologies is transforming America and the rest of the world at rates unfathomable during the Industrial and Agricultural Ages.  Countries that respond rapidly to these transformation technologies will reap the economic bounty.

Standby for the next posting regarding Income & Wages as part of the Domestic Disruptors series (Technology, Income & Wages, Civil Unrest, and Natural Disasters), or download the entire 60-Page Jobenomics 2018 U.S. Economic Outlook at the Jobenomics Library.