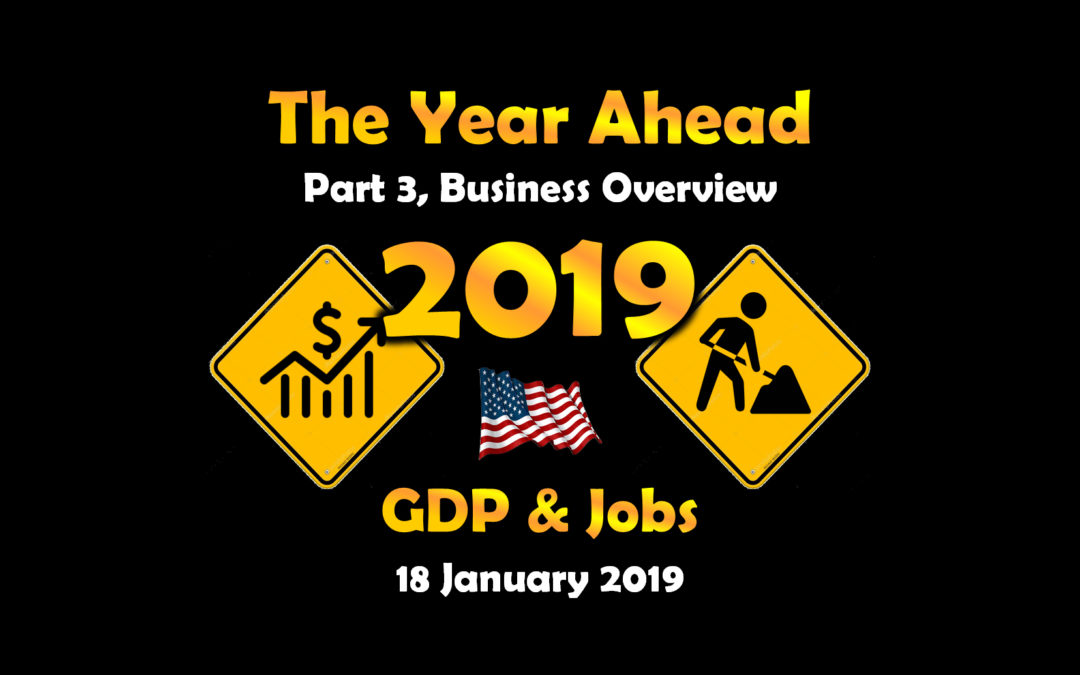 The BLS definition of a nonemployer business is “one that has no paid employees, has annual business receipts of $1,000 or more ($1 or more in the construction industries), and is subject to federal income taxes”.  Nonemployer businesses include:

Since the beginning of this decade to today (1 January 2010 to 1 January 2019), small and micro businesses created the vast majority of all new jobs:

It is a common misconception that small businesses are only involved in service-providing industries whereas large major corporations dominate goods-producing sectors.

Regrettably, but few American decision-makers know much or anything about them.  The U.S. government excludes nonemployer ownership from their leading labor force statistical analysis.  The reason for this is because the leading monthly government surveys focus on employer businesses and the general population characteristics.[8]  The Census Bureau does produce an annual Nonemployer Statistics (NES) series that provides subnational economic data for firms that have no paid employees and are subject to federal income tax.”[9]  The NES also has other restrictive conditions that leads Jobenomics to believe that the actual number of nonemployer firms is much larger than 25 million. 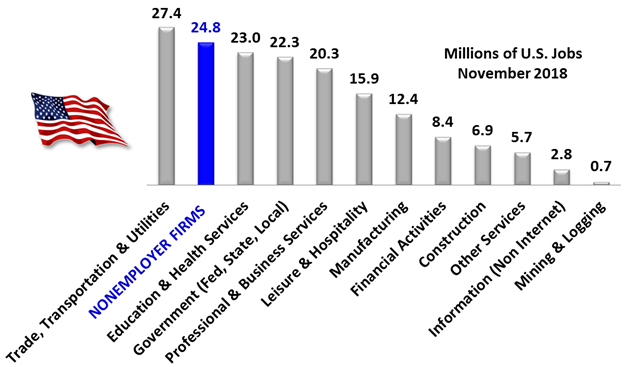 The Census Bureau’s 2012 Economic Census’ Survey of Business Owners (latest data) calculated that U.S. business had annual business receipts of $33.5 trillion, which is defined by the Bureau as the “total sales, shipments, receipts, revenue, or business done by domestic establishments (excludes foreign subsidiaries) with and without paid employees and within the scope of the Survey of Business Owners.”  5,424,458 employer firms accounted for 97% ($32.5 trillion) and 22,201,902 nonemployer firms accounted for the remaining 3% ($1.0 trillion) of the annual receipt total. [10]

As of a result of this “small economic impact” (3%), the Bureau of Labor Statistics “excludes” nonemployer statistics from their leading employment reports that provide the basis for almost every major U.S. government economic and labor force report and U.S. policy-making.[11]

The statement that nonemployers have “small economic impact” is not supported by government data and appears to either be politically-motivated or naïve.  The premise that nonemployers contribute only 3% ($1 trillion) of the annual receipt total ($33.5 trillion) is correct.  However, as shown below, 60% of the major U.S. industrial sectors contribute even less. 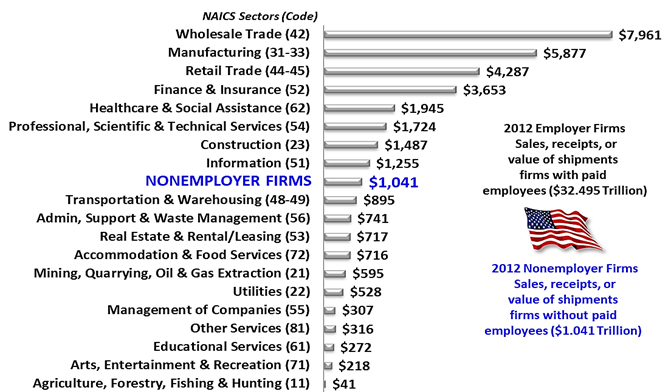 Jobenomics asserts that excluding 24.8 million single-person nonemployer establishments that have a “greater economic impact” than 60% of the major industrial sectors is wrongheaded and will be discussed in more detail in a subsequent posting in this Year Ahead Report series.

Businesses create jobs that produce goods and services (GDP) to satisfy a nation’s needs and wants.  Consequently, a healthy business environment is essential to generating new jobs that are essential to meeting the needs of a growing population.  Compared to population growth, American businesses are growing today at one-fourth the rate than they did in the 1990s.

The rate of U.S. job growth far exceeded population growth in the 1980s and 1990s, 18% and 34% respectively.  This extraordinary growth expanded the middle class and the belief in the American Dream.  It also provided income opportunities for tens of millions of people and cushioned the workforce during 26-months of recession.  Then the bottom fell out.

From 2000 to 2009, 26-months of recession stagnated workforce growth during a period where U.S. population outgrew the labor force by 13%.  During this era, the U.S. suffered a net loss of approximately 1 million jobs compared to population growth of 34 million people.  So far this decade, employment growth outpaced population growth by a meager 8% during a recession-free period that is expected to continue through 2019.

Big goods-producing corporations (mainly manufacturing) grew at only 1.0% this decade.  However, President Trump’s manufacturing emphasis is beginning to bear fruit with overall manufacturing growth at 4.0% during 2017 and 2018.  The year 2019 should be even better since most of the U.S. major trading partners have agreed to more equable trade agreements.  China, responsible for half of the U.S. trade deficit in both 2017 and 2018 through October, is the last major holdout but will eventually agree to a compromise that will be more balanced.  If this happens, 2019 should be an outstanding year for most U.S. industries.  If it doesn’t, 2019 could be very bad for business.

Micro-businesses grew between 0.6% and 0.8% which is significantly less than GDP growth.  Other than a few unicorns (a startup company valued at over $1 billion) and gazelles (a high-growth company that has been increasing its revenues by at least 20% annually for four years or more starting from a revenue base of at least $100,000), the U.S. business engine is faltering, and business startups dropped to 30-year lows.

Regarding new starts (firms less than 1-year old), the Census Bureau’s Business Dynamic Statistics indicate that the United States is now creating startup businesses at historically low rates, down from 16.5% of all firms to 8% in 2014 (data range from 1977 to 2014). [12]    Based on a Wall Street Journal (WSJ) analysis of this Census Bureau data, “If the U.S. were creating new firms at the same rate as in the 1980s…more than 200,000 companies and 1.8 million jobs a year” would have been created. [13] 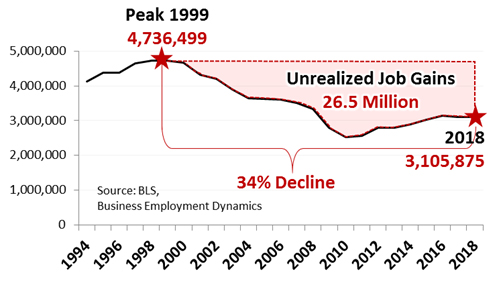 As shown, over the last 20-year period, the peak number of jobs created by all firms less than one-year-old was in 1999 that generated 4,736,499 new jobs.  From peak to today, the number of startup jobs created decreased 34% to 3,105,875 in 2018.  If the United States maintained the same level of production at 1999 levels, unrealized workforce gains would have amounted to 26.5 million new jobs, or 1.4 million jobs per year—a figure very close to the 2016 WSJ prediction of 1.8 million jobs.

While the United States is a remarkable place for doing business, America falls short in making it easy to create a company.  According to The World Bank, out of 190 nations, the United States ranks 8th in Ease of Doing Business and 53rd in Ease of Starting a Business.[15]

From a Jobenomics perspective, the Trump Administration’s business and job creation initiatives (tax cuts, regulatory reform, and balanced trade policies) are necessary to grow the economy.  However, today’s partisan Congress, divided electorate and so-called resistance movement could undermine these initiatives.

Greater attention needs to be focused by the Administration, Congress and economic development professionals across the United States on small business and workforce development in communities stuck at the bottom of America’s socio-economic pyramid.  The 2017 Tax Cut & Jobs Act included legislation for 8,700 Opportunity Zones (12% of U.S. Census tracts) in under-resourced urban and rural communities.  The Act also included provisions for Opportunity Funds and generous capital gains deductions that could motive tens of billions of dollars’ worth of investing in these financially-distressed communities.

Economic growth depends on GDP growth, which is dependent on businesses that create the means (jobs) to deliver goods and services.  When an economy grows at negative or sclerotic GDP rates, instability and unrest occur, and governing institutions lose their sense of legitimacy as evidenced by what’s happening globally today.  The erosion of America’s middle-class and the American dream over the last several decades is one of the principal reasons for the growing interest in socialism.

In many ways, the rise in socialism in the United States is proportional to the increase in American casino-capitalism.  Casino-capitalism involves making money on money as opposed by making money on labor.  Casino-capitalism benefits the wealthy few.  On the other end of the political spectrum is socialism that is mistakenly advertised to solve the needs of the many.  To reunite our divided electorate, the United States needs to return to inclusive-capitalism (Jobenomics’ focus) where citizens can achieve self-sufficiency and upward-mobility by making money on their labor or laboring collectively with other workers in a small business environment that promotes unity, good-fellowship, and purpose.

[1] Note: startups, micro and small employer businesses and nonemployer firms are discussed in subsequent postings in this Year Ahead report in more detail.

[11] The BLS Employment Situation Summary report uses a combination of Establishment Survey Data and Household Survey Data provided by the Census Bureau.  The Establishment Survey (officially known as the Current Employment Statistics survey or CES) excludes nonemployer firms.  The Household Survey (officially known as the Current Population Survey or CPS) includes a limited sampling of nonemployer firms such as self-employed persons.  For more information see Understanding the employment measures from the CPS and CES survey at https://www.bls.gov/opub/mlr/2006/02/art2full.pdf