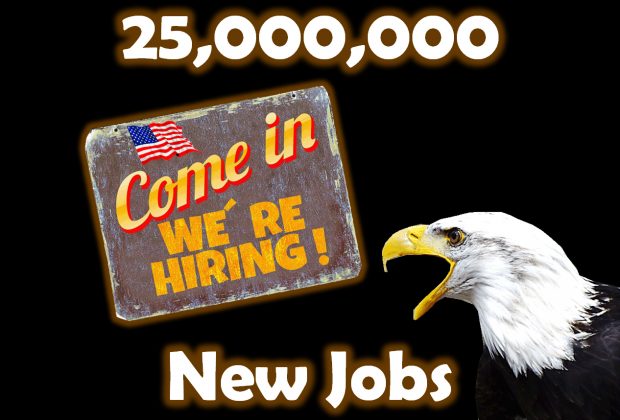 President Trump’s New Economy Challenge (Part 2 of 20).   According the White House website,  “To get the economy back on track, President Trump has outlined a bold plan to create 25 million new American jobs in the next decade and return to 4 percent annual economic growth….that starts with pro-growth tax reform to help American workers and businesses keep more of their hard-earned dollars.”  While the business acumen of President Trump and his Cabinet gives Jobenomics a sense of optimism, Jobenomics and the millions of followers in the Jobenomics National Grassroots Movement eagerly await evidence that the Trump team can fulfill their economic and job creation objectives. We also pray that the American public will unite with President Trump’s vision of “Bringing Back Jobs and Growth.”

The following examples are some of the perceived differences between the Administration’s Plan and the Jobenomics Plan, which is based on six books worth of research and thousands of meetings with community leaders, business executives and government officials on economic, business and job creation.

The reason for the decline in manufacturing jobs and wage is not only due to overseas outsourcing but rather to technology.  Automation of routine manual factory floor skills has been underway for several decades.  Over the next decade, automation of routine cognitive skills will be next via smart systems, sophisticated algorithms and artificial intelligence agents.  Technology will not only enable machines to replace humans, but dissect full-time jobs into multiple part-time jobs and then further segment work into disparate tasks for contingent workers, who will increasingly displace traditional full-time workers.

In conclusion, small business and job creation is the number one issue facing the U.S. in regard to economic growth, sustainment and prosperity.  Jobs do not create jobs, businesses do.  The vast majority of jobs are produced by small and micro businesses.  Having a businessman President and Cabinet full of business professionals gives Jobenomics a sense of assurance that the Trump Administration will be amenable to new business and job creation strategies, especially those with an emphasis on demographics with highest potential and need at the base of the American socioeconomic pyramid.

Stay tuned for the next installment in the President Trump’s New Economy Challenge series entitled, “The Nexus between Jobs and GDP” scheduled for release on 15 February 2017.