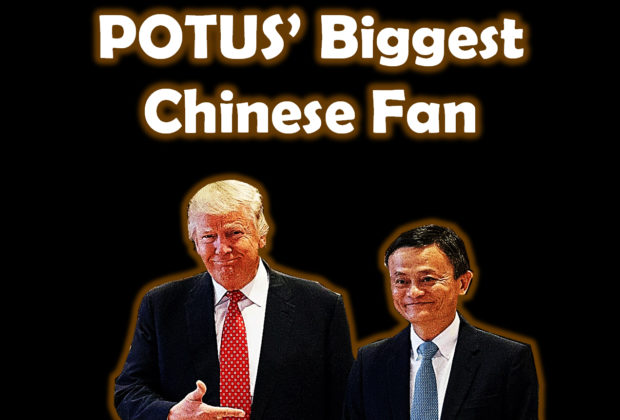 President Trump’s New Economy Challenge (Part 11 of 20).   President Trump wants to create 25 million new jobs over 10 years.  He can’t do it himself.  The private sector has to step up.  So far, a handful of U.S. manufacturing companies have stepped up offering to re-shore or retain tens of thousands of American jobs.  One company really stands out among all others and it is not even a U.S. company.  Nor is it a manufacturing company.  It is Alibaba.

Started as a Chinese home-based business in 1999 by Jack Ma, a former English teacher, Alibaba’s rise has been historic.  Alibaba, one of the world’s largest e-commerce conglomerates, credits its meteoric rise to America.  Now, Jack wants to give back to his American friends.  Two weeks before President Trump’s inauguration, Jack traveled to New York City to chat with President-elect Trump.  To President Trump’s surprise, the meeting ended with Ma volunteering to create 1 million U.S. small business jobs over 5 years by expanding Alibaba’s e-commerce operation focused on exporting American agriculture and manufactured products to Asia from the American Midwest.  Sceptics see Jack’s gesture as a gambit to compete with the likes of Amazon.  Jobenomics believes otherwise.  Ma Yun, Jack’s Chinese name, is by all accounts is a unique and extraordinary global citizen.  The world needs more Jack Ma’s.  So does the Trump Administration.

According to Jack Ma, Alibaba was founded “to champion small businesses, in the belief that the Internet would level the playing field by enabling small enterprises to leverage innovation and technology to grow and compete more effectively in the domestic and global economies.”  Alibaba’s vision to champion small business creation via the NTR will facilitate prosperity and employment growth to a far greater extent than Google, Microsoft, CISCO, Facebook, IBM or Apple’s narrower product and services-oriented mission/value statements.  Ma’s strategic vision fits within China’s strategic framework to become the world’s leading economic power.  Founder Jack Ma committed Alibaba to create 100 million global micro-entrepreneur jobs in 2010s via the emerging digital economy—he is well on his way to accomplishing this goal in China.

Alibaba’s global leadership has been largely underwritten by Americans, starting with U.S. developed NTR technology, processes and systems and major investment by Yahoo and Wall Street’s largest ($22 billion) initial public offering ever at $68 per share.  Despite China’s recent economic downturn and Alibaba’s aggressive horizontal and global expansion expenditures that dropped Alibaba’s stock price to $57 per share in August 2015, rebounded by 74% in August 2016 to $99 per share.  Most analysts maintain their bullish views on Alibaba Group’s future.  Jobenomics agrees and believes that Alibaba has positioned itself well to respond to China’s economic downturn and China’s strategic financial needs—building a viable middle class and transitioning China from a physical to a digital economy.  Alibaba sales increase indicates an increase in domestic consumption that is vital to Chinese economic growth.  To a large extent, China’s economic future depends on the success of Alibaba and other NTR-centric Chinese conglomerates.  The same is true for the United States in regard to companies like Amazon, other leading NTR-centric American corporations and emerging enterprises.

China’s phenomenal double-digit economic growth has been overwhelmingly manufacturing and urban centric.  In order to keep growing, the Chinese government is now pursuing an e-commerce strategy for rural economic development with emphasis on provincial micro-business creation.  Chinese companies like, Alibaba and JD.com, are central to this e-commerce strategy.  Even with China’s economic downturn, Chinese online consumption grew 33% in 2015, compared to U.S. online sales growth of 15%.  The top 500 largest online retailers serving the Chinese e-tailing marketplace grew by an astonishing 57% in 2015.  The top 500 is represented by approximately 400 Chinese companies, 50 American companies and 50 other international companies.  The growth rate of the 50 American e-tailing companies in China was 24% compared to 71% for the Chinese counterparts.  American growth was due to popular U.S. iconic products, like iPhones, which are increasingly being replaced by higher quality Chinese products and knockoffs.

Alibaba’s phenomenal growth was due largely to urban (Shanghai, Beijing, Tianjin, Guangzhou, etc.) customer loyalty programs, aligning e-commerce to social and entertainment networks, and the creation and financing of approximately 10 million new Chinese micro-businesses.  By investing in the rural population, which is roughly the same size as the 700 million-strong urban population or twice the size of the entire U.S. population of 320 million, Alibaba hopes to develop a huge new customer loyalty base that has been previously shutout of China’s economic miracle.  Alibaba has been aggressively reinvesting its capital reserves in developing a rural e-commerce platform and acquiring peripheral companies and technology to augment this platform.  Alibaba is investing $2 billion in training locals, providing free computers, arranging startup financing, and establishing a logistical supply chain to connect 100,000 villages to its e-commerce platform by 2018.

With its revolutionary business model, Alibaba’s Ant Financial has grown to a $60-billion company in just three years and is set to revolutionize the world of finance, with emphasis on rural China.  Officially known as Zhejiang Ant Small & Micro Financial Services Group, Ant Financial has its own financial network, money market fund (Yu’ebao) and a credit scoring system with 400 million active users.  Just as the name “ant” implies, Ant Financial focuses on the little guy.  Most of the active users are poor people who are not rich enough to meet minimum bank deposit standards or invest in the stock market.  In addition, Ant Financial loans are aimed at helping over 100 million Chinese micro businesses, with emphasis on impoverished rural communities.

In July 2016, Alibaba’s Ant Financial and the Microfinance Management arm of China’s Foundation for Poverty Alleviation concluded an agreement to jointly help lift people out of poverty with the aid of the internet and blockchains  to more than 300 national and provincial counties by 2020.  Donors on Alibaba’s “Ant Love” charity platform will be able to track transaction histories and gain a clearer understanding of how their donations are used.

In times past, the regime in Beijing would have been skeptical of Alibaba’s grand plan of building millions of micro-businesses at the base of China’s economic pyramid, but times are different now.  The regime knows that domestic household consumption (36% in China compared to 69% in the United States) must increase significantly in order to please the masses and allow the new Chinese digital economy to grow without dependency on the rest of the world as is the case with today’s manufacturing-oriented economy.

Beijing also knows that its large private sector businesses can create small businesses faster and better than the government can.  In June 2015, Premier Li publicly stated that the central government is supporting (via tax breaks, underwriting small business loans, and cutting red tape) “migrant workers, college graduates and army veterans who wish to return to their rural hometowns to start new businesses, part of a national campaign to boost entrepreneurship and employment.”  The Chinese government is also supporting e-commerce companies, like Alibaba, to set up “consumption finance” firms and offering these companies equal access to public services (social insurance, housing, education and healthcare) in order to encourage netizens to seek new careers or start microbusinesses in rural regions.

Stay tuned for the next installment in the President Trump’s New Economy Challenge series entitled, “Will President Xi Trump President Trump?” scheduled for release on 14 March 2017.