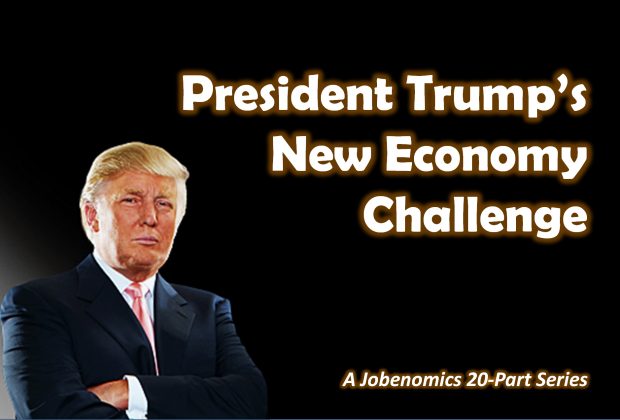 President Trump’s New Economy Challenge (Part 1 of 20).   President Trump has outlined a bold plan to create 25 million new American jobs in the next decade and return to 4 percent annual economic growth.  Since Jobenomics deals with the economics of business and job creation, the 20 million followers in the Jobenomics National Grassroots Movement enthusiastically support such a bold plan.  To make this plan a reality, the incoming Trump Administration will have to focus not only on the old (industrially-based) economy but on the emerging new (digitally-based) economy.  From a Jobenomics perspective, more attention needs to be placed on the emerging new economy than currently proffered to the American public by the new Administration.  As such, Jobenomics respectfully offers this 20-part blog series entitled “President Trump’s New Economy Challenge” that will be posted over the next two months.

The Table of Contents for Jobenomics 20-part blog series on “President Trump’s New Economy Challenge” includes a wide range of major business and labor force trends that are reshaping the U.S. economy.

Major New Economy trends and challenges that are addressed in this series include: understanding the current American workforce employment and unemployment situation, exploiting the emerging digital economy and its seven major sub-communities, enhancing American global competitiveness in the emerging network and energy technology revolutions,  managing the labor force shift from standard workforce agreements to a contingent workforce that now includes 40% of all U.S. workers, reversing the decline in small business (the engine of the U.S. economy) and mass-producing startup businesses,  mitigating the exodus of adult workers who can work but choose not to work to lives of dependency or alternative lifestyles, reducing income inequality by increasing income opportunity for the 72% of American wage earners who make less than median wage, balancing degree-based education with training and certification programs, and implementing a viable urban renewal small business and job creation strategy for blighted inner-city communities.