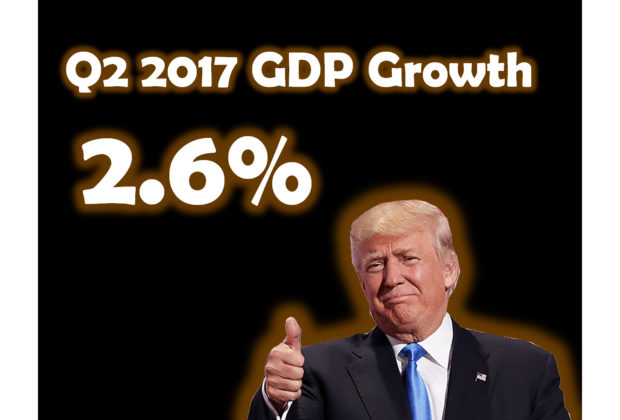 Real gross domestic product (GDP) increased at an annual rate of 2.6% in the second quarter of 2017 (Q2 2017) according to the “advance” estimate released by the U.S. Bureau of Economic Analysis on 28 July 2017.   2.6% is a positive sign for the U.S. economy and a potential pivot point for President Trump’s bold plan to grow GDP to an annual rate of 4%, create 25 million new jobs and get the “American economy back on track”.  To understand the nexus between GDP and employment, as well as the efficacy of the Trump Plan, one must understand U.S. GDP growth from a historic and strategic perspective.

Most economists believe that economic growth depends on employment and GDP growth.  Today, the ideal rate for U.S. GDP growth is around 3%.  If GDP growth exceeds 4%, generally signal signs of an overheating economy and asset bubbles.  Any GDP growth below 2% is considered sclerotic growth that makes the U.S. economy vulnerable to financial downturns.

Q1 2017’s GDP “revised” estimate (latest) was a subpar 1.2%—up from an abysmal “advance” estimate of 0.7%, equal to the 1.2% “second” estimate, and down from the 1.4% “third” estimate.  Regardless of estimate, Q1 GDP data was not good news for the new Trump Administration.  However, these low percentages can be rationalized as a carryover from the previous Administration.

While GDP growth does not insure employment growth, sclerotic GDP growth discourages business hiring, consumer spending and labor force expansion.  Sclerotic GDP growth also discourages lower rates of unemployment and voluntary workforce departures.  Negative GDP growth creates recessions and depressions depending on the severity and longevity of the contracting economy.  The solution to avoid a financial crisis is to accelerate GDP growth, which requires the creation of more productive private sector jobs, which, in turn, can only be generated by a massive expansion of the small business sector.