The Nexus between Jobs and GDP 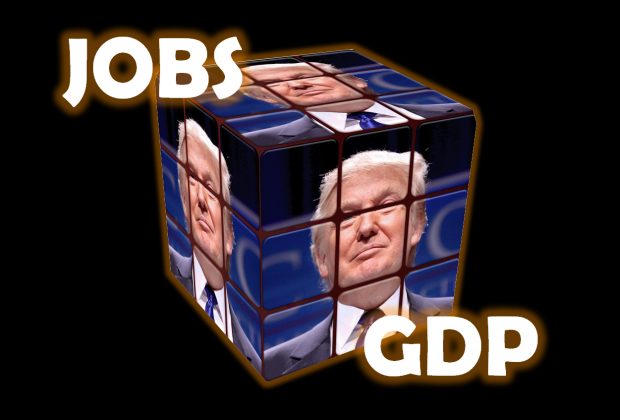 President Trump’s New Economy Challenge (Part 3 of 20).   President Trump’s vision of a “dynamic and booming economy” is one that can produce a GDP growth rate of “4% over the next decade”.  President Trump’s Cabinet has many capable business and financial executives who can make his vision a reality.  This reality ultimately depends on mass-producing business, especially small business, creation in order to generate 25 million net new jobs.  Sclerotic (0% to 2%) or recessive (negative) GDP rates depreciate a government’s legitimacy as it did to the previous Administration that averaged only 1.5% over President Obama’s 8-year term in office according to the U.S. Bureau of Economic Analysis.  Burgeoning GDP rates (2%+) have the opposite effect.  If the Trump Administration can achieve 4% in a stable global economy, Americans and the world will be euphoric.  This feat will not be easy.  The last year the United States breached 4% in a single year was 2001.  The last time that the United State reached 4% in ten consecutive years over the last 50-years was never (3.5% was the highest from 1976 to 1985).  Notwithstanding, if the Trump Administration can tie the 3.5% record over the next decade, they will be vindicated and worthy of much praise.

Over the last half century, U.S. debt has grown at a rate 18-times faster than GDP and shows no signs of slowing if Americans continue on their current path of over-spending and under-producing.  Since spending cuts do not seem to be possible due to America’s deeply divided electorate, the solution to growing GDP rests in increased production, which depends on greater business and job creation.

Over the last five decades, total U.S. debt (government, business, financial and individual) has grown from a luxury for a few to an addiction to all.  Compared to the current U.S. GDP of almost $17 trillion, U.S. debt has now reached an all-time high of $63 trillion, up from $27 trillion in 2000 and $5 trillion in 1980, as reported by the U.S. Federal Reserve system (Central Bank, commonly called the Federal Reserve or simply the “Fed”, a quasi-government institution responsible for the U.S. monetary policy, money supply and interest rates).  U.S. federal government debt equals about one-third of total American debt whereas private debt is responsible for the remaining two-thirds.

Excessive debt is not only an American challenge.  According to the International Monetary Fund (IMF), global combined debt (government, household, and nonfinancial firms—not including the financial sector) is at an all-time at 225% of world GDP, or $152 trillion.  Two-thirds, amounting to about $100 trillion, consists of liabilities in the private sector.  “The sheer size of (private sector) debt could set the stage for an unprecedented private deleveraging process that could thwart the fragile (global) economic recovery….Financial crises tend to be associated with excessive private debt….It is clear that meaningful deleveraging will be very difficult without robust (GDP) growth.”

As scary as this IMF prediction is, it does not include the unimaginable debt associated with the too-big-to-fail financial sector.  The financial sector not only includes commercial banks, shadow banks (hedge funds, money-market mutual funds, etc.) and financial intermediaries (insurance companies, pension funds, etc.)—all of which pose a near-term global financial risk in excess of $50 trillion.

And then there is the invisible financial behemoth called derivatives.  Derivatives are largely unregulated financial instruments based on the perceived future value (bets) of an underlying asset like stock, bonds, mortgages, currencies, interest rates, as well as variety of other exotic bets such as the weather’s effect on crops.  Estimated at $1 quadrillion ($1,000 trillion), the derivatives market equates to over 10-times world GDP.  Derivatives caused the sub-prime mortgage crisis that led to the 2007 Great Recession and global financial crisis and are likely to be a major contributor to the next global financial reset.  Little has been done since the Great Recession to mitigate this threat.

Since the Great Recession, government debt increased by 50% in advanced economies that are busy printing money, lowering interest rates, buying up weak financial assets (like mortgages), spending on overpriced infrastructure projects (especially in China) and a host of other programs to stimulate GDP growth.  In the short-term, these efforts have been successful elevating consumption and elevating stock and real estate markets.  However, risks continue to compound.  Banks are more fragile (e.g., Germany’s largest bank’s stock value has dropped by 60% in the last year alone).  Insurance companies are scrambling (e.g., U.S. insurance companies are exiting Obamacare in droves).  Pension funds are underfunded (e.g., U.S. state and local pension funds have up to $3 trillion of unfunded commitments).  Welfare programs are on the road to insolvency (e.g., Medicare is projected to be insolvent within 10-years).  In other words, there are very dark storm clouds on the horizon.

Since the onset of the Great Recession, the U.S. federal government and the Fed spent almost $17 trillion dollars’ worth of stimuli and incentive programs.  The Fed is responsible for two-thirds ($11 trillion) of the total.  In addition to spending, the Fed has held interest rates to near-zero in hopes of invigorating the economy.  The net result of government spending and a near-zero interest rate policy has not achieved robust GDP or labor force growth as anticipated.  However, it did keep the economy from sliding into a depression and caused the U.S. stock markets to soar, greatly benefiting the top 1% while simultaneously eroding the American middle-class and labor force.

The infusion of $17 trillion into the economy, foreign investment has helped keep the U.S. economy recession-free since the Great Recession.  The reason for foreign investment is that the U.S. economy has been the “least ugly” economy in the world.  The European Union is in crisis with its southern member nations in recession.  China has experienced a major slowdown and a large part of the remaining developing world countries are struggling.  Even the oil-rich Middle East is reeling from low oil prices, insurgencies and terrorism.  So until things change, America should continue to be a safe haven for foreign investment.  Unfortunately, the international landscape is rapidly evolving with potentially negative political, economic and military consequences.  Fortunately, having a businessman President with larger-than-life bravado and a penchant for making deals should help to keep the U.S. as the least ugly economy in the world for foreign investment.

By being the least ugly global economy, U.S. stock, bond and real estate markets have been able to attract foreign and domestic investment, which has managed to keep GDP growing, albeit much too slowly.  President Trump’s economic and job creation vision (doubling GDP and employment growth) is vital to staving off a near-term recession and maintaining the flow of foreign investment into the United States.

The Trump Administration faces a Catch-22 (a dilemma where there is no easy solution due to conflicting positions) in regard to foreign investment.  If the U.S. economy grows too quickly, the $10 trillion dollars in dollar-denominated foreign debt could trigger a foreign financial crisis that would not only restrict capital inflows to the United States, but would threaten foreign government investment in their own domestic programs.

A “strong dollar” benefits U.S. citizens by managing inflation, controlling rates and enhancing American buying power.  On the other hand, a strong dollar makes U.S. exports more expensive to buy.  Normally, a strong dollar is preferable to a weak dollar.  However, if the dollar becomes too strong to rapidly (it jumped a whopping 3% versus a basket of global currencies since Trump won the election) foreign governments could interpret rapid dollar growth as a sign of American protectionism or hegemony.  Implementation of tariffs, import taxes and other trade-limiting policies could precipitate reciprocal foreign protectionist policies and exacerbate the potential for a financial crisis and/or conflict.  President Trump’s Catch-22 ultimately lies in resolving the dispute between supporters of nationalistic policies and those that promote globalism.

Unfortunately, profligate government spending has reached its zenith and the relative attractiveness of U.S. markets may be approaching an apex, making the likelihood of a U.S. recession relatively high.  A recession would not only impact the U.S. economy, but would cause a U-turn in recent incremental U.S. employment gains.

U.S. Average of 1.7 Recessions per Decade

Since the 1940s, the U.S. economy averaged 3 financial crises and 1.7 recessions per decade.  Unlike many parts of the world, the United States has been recession free this decade largely due to government spending and the relative attractiveness of U.S. investment opportunities compared to the rest of the world.  The question is how long can the U.S. remain crisis and recession free?

Most economists believe that economic growth depends on job and GDP growth.  The ideal rate for U.S. GDP growth is 2% to 3%.  For the United States, a mature economy, sustained GDP growth significantly over 3% tends to led to overheating and bubbles.  Anything below 2% is considered sclerotic growth and makes the economy vulnerable to financial downturns.  During the post-WWII recovery, U.S. GDP grew at an average rate of 3.5% which created tens of millions of new jobs each decade.  Since 2000, U.S. GDP averaged 1.87%.

President Trump’s economic vision includes doubling U.S. GDP growth to the 3.5% to 4.0% range according to his economic plan.  He has also selected capable business and financial executives for his cabinet to make this vision a reality—this reality ultimately depends on business, especially small business—growth in order to generate goods and services necessary to grow GDP.  Federal Reserve economists forecast Q1 2017 growth of 2.3%.   This is a positive forecast but only a single data point in what portends to be a turbulent era as the world tries to rationalize growing nationalism with declining globalism.

The period of sclerotic GDP growth from 2000, has dramatically impacted the American middle-class and the U.S. labor force that gained only 14.5 million workers compared to the loss of 28.3 million that are officially unemployed and voluntarily departed the labor force.  For most American workers, real wages (purchasing power) have not increased for decades and are not projected to improve anytime soon.  America’s aggregate household income has shifted from middle-income to upper-income households, causing many middle-class workers to leave the workforce altogether.

The solution to avoid a financial crisis is to accelerate GDP growth, which requires the creation of more productive private sector jobs, which, in turn, can only be generated by a massive expansion of the small business sector.  While this may seem simplistic, 20 million Jobenomics followers think this methodology has merit.  The Jobenomics website, which averages 500,000 hits every month, indicates the high level of interest and concern around the world on the current global economic, business and workforce development solutions.