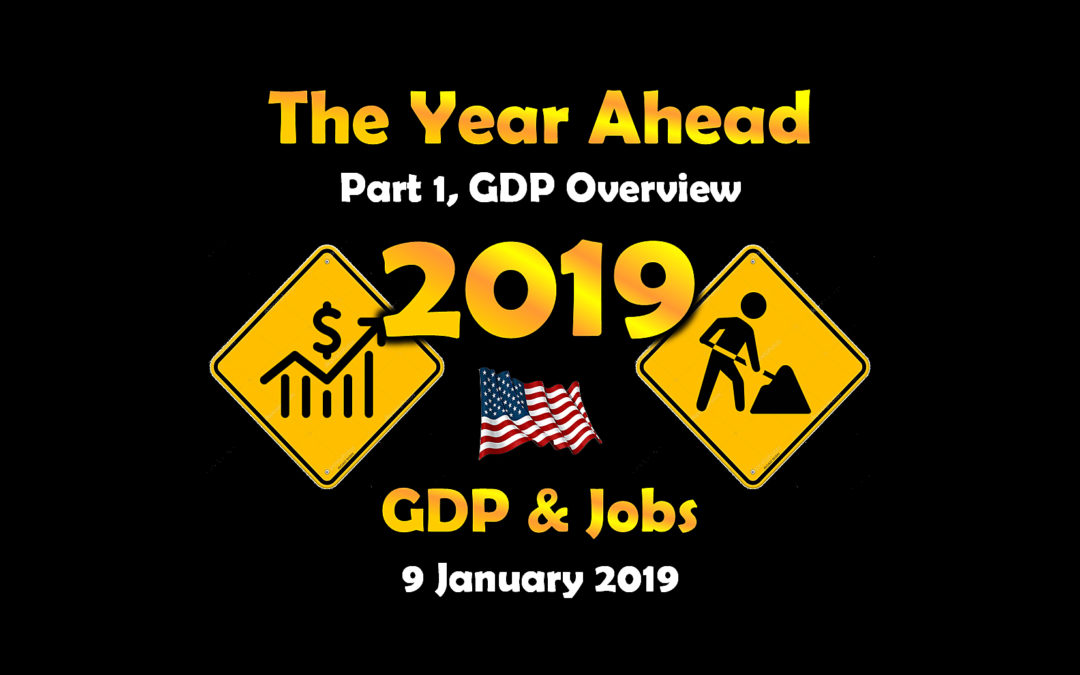 Gross domestic product (GDP) is the best way to measure a country’s economy.  Today, the ideal rate for U.S. GDP growth is over 3%.  Any GDP growth below 2% is considered sclerotic growth that makes the U.S. economy vulnerable to financial downturns.  In mature economies, overheating and asset bubbles cause GDP to grow at rates exceeding 4%.  To achieve a sustainable annual rate of 4% GDP growth over an entire decade, as President Trump envisions, one would have to turn the clock back to the 1940s, 1950s, and 1960s that produced 6.0% 4.3% and 4.5%, respectively. (Download this Post.)

Achieving President Trump’s sustained (without overheating and bubbles) 4% GDP year-over-year growth goal over the next decade will be challenging.  The last time that the United States produced 4% over ten consecutive years during the previous 5-decades was never (3.5% was the highest from 1976 to 1985).  Notwithstanding, if the Trump Administration can tie the 3.5% record over the next decade, the President will be worthy of much praise and his controversial policies largely vindicated.

This chart, derived from the U.S. Bureau of Economic Analysis (BEA) data, indicates that the U.S. GDP history from 1930 to present has been on a long downward path.  Since the first positive GDP growth year after the end of the Great Depression, U.S. GDP growth declined 69% from 10.8% in 1934 to 3.3% today (average of the first three quarters in 2018).

This chart shows the annual GDP roller coaster ride since the turn of the Century.  Given current trends, 2018 will be the first year since 2005 to break the 3% yearly threshold.

Due to tighter financial conditions and a fading fiscal stimulus, many economists forecast much slower GDP growth over the next decade.  The Congressional Budget Office projects that real and real potential GDP growth over the 2018-2019 period will average only 1.9%.[5]  Goldman Sachs Macro Outlook 2019 report projects the U.S. GDP “growth is likely to slow significantly next year, from a recent pace of 3.5%+ to roughly our 1.75% estimate of potential by end-2019.”[6]  Economic projections of Federal Reserve Board members and Federal Reserve Bank presidents (the people responsible for setting U.S. monetary policy) predict that U.S. real (adjusted for inflation) GDP will decelerate from 3.1% in 2018 to 2.5% in 2019, 2.0% in 2020 and 1.8% in 2021.[7]

Achieving President Trump’s campaign goal of sustained 4% GDP year-over-year growth over the next decade will take a lot of work and luck.  The last time that the United States generated 4% over 10-consecutive years in recent history was never.  Over the previous 5-decades, the best 10-consecutive year run was 3.5% from 1976 to 1985.  Notwithstanding, if the Trump Administration can even tie the 1976 to 1985 3.5% record over the next decade, the much-maligned President will be worthy of abundant praise and his controversial policies largely vindicated.

From the end of the Great Recession in June 2009 to 1 January 2018, the United States economy delivered 114 straight months of GDP growth, which puts this recession-free run in second place over the last eight decades.  The 1990s had the longest run of 119 months.  If the current 114-month period of economic expansion continues, the United States will upend the historical record of 119 months in June 2019—a little over 60% through President Trump’s first term in office.  Not only will it beat the 1990s expansion, but it will also be the longest expansion since 1857.

While the current 114-month period of economic expansion is phenomenal, the United States is tied for fifth-place globally.  China’s uninterrupted GDP growth span began in December 1989 and is now an incredible 349 months in duration.  Other long-runs include Australia (325 months since December 1991), India (266 months since November 1996), South Korea (121 months since December 2008), and Germany (114 months since June 2009)—the same as the U.S. expansionary period.

Personal Consumption/Expenditures as a Percent of U.S. GDP

PCE (highlighted in yellow) grew from $9.8 trillion in Q3 2007 (the fiscal quarter before Great Recession) to $14.1 trillion in Q3 2018, or 67% and 68% of GDP respectively.  Personal consumption and expenditures (PCE) is overwhelmingly the primary component and driver of the U.S. economy.  PCE is determined by how much of the income earned by households is spent on purchased goods and services.  PCE is dependent on a growing labor force and the wages that the workers receive.  If labor and wages stop growing, then GDP stops growing.  The opposite is also true.

In the 1990s, U.S. multinational companies began aggressively outsourcing American jobs to lower-cost countries, like China, Mexico, and Vietnam.  This practice stagnated American wage growth in favor of building middle-classes in developing countries.  As the post-Cold War leader, assisting foreign economies was an admirable pursuit.  However, the United States now needs to focus on the restoration of America’s middle-class labor force.

The U.S. trade deficit (U.S. imports/exports) is the only major component of U.S. GDP that continues to be negative costing millions of jobs that, in turn, throttle GDP growth.

From the year 1997 through Q3 2018, the year-over-year goods trade deficit totaled a staggering $12.4 trillion.[11]  President Trump’s recent reciprocal trade policies are designed to mitigate the outflow of U.S. dollars and recapitalize America as opposed to modernizing our competitors.

Over the last 4-decades, $12.4 trillion worth of trade deficits of combined goods and services ravaged domestic U.S. industries and workers.  A trade deficit in goods (tangible items such as manufactured products) was $16.1 trillion that was offset by a surplus of $3.7 trillion of services.  It is important to note that a significant portion of the services trade surplus was due to foreign travel and business services that help developing countries build their economies.  According to recent government data (final 2018 data is not yet available), 2018 portends to be the worst year ever with a goods deficit of $891 billion.

While a trade deficit of $12.4 trillion is a considerable amount, the trade deficit pales in comparison to $70 trillion worth of U.S. direct investment abroad over the same period.  Of the $70 trillion, $32 trillion (45%) was spent on establishing holding companies (primarily for U.S. tax evasion) and U.S. industries abroad, $15 trillion (21%) on financing and banking for foreign projects, and $12 trillion (17%) for overseas manufacturing and joint venture efforts. [12]

While U.S. MNEs earned almost three times the amount of money abroad compared to foreign MNEs did in the United States, U.S. MNEs contributed significantly more to external economic development than foreigners did for America.  U.S. direct investment abroad is often used for the development of modernized transportation systems and digital infrastructures, and state-of-the-art international industrial and commercial conglomerates.  Foreign direct investment in the United States is usually oriented to building capacity for foreign exports to the United States or investing in high-tech U.S. startup firms. [13]

Trade deficits and foreign direct investment are not the only issues depressing GDP growth.  Trade barriers (quotes, licensing, etc.) and the theft of American intellectual property take a toll on American labor and industry.  The U.S. Commission on the Theft of American Intellectual Property states that the intellectual property theft (cyber theft, counterfeit goods, software piracy, and trade secrets theft) costs the American economy as much as $600 billion a year with the majority attributed to China.  In addition to annual financial losses of up to $600 billion per year, intellectual property theft causes suppression of GDP growth and innovation, tens of millions less U.S. jobs, and billions of dollars lost in personal, household and family incomes.[14]

Jobenomics Prediction for the Year Ahead

U.S. GDP growth in 2019 is likely to be in the mid 2% range, falling short of the Trump Administration’s outstanding GDP accomplishments in 2018.  While the President has established the foundation for robust GDP growth in 2019, his aggressive style also spawned a resistance movement that is committed more to overthrowing the current Administration than concentrating on economic and labor force.

The success of the U.S. economy relies on continuous GDP growth that relies on a robust and innovative labor force to produce the goods and services for consumption.  For every monthly percentage point change of GDP growth approximately 125,000 jobs are gained or lost.  Thus, throughout 2019, 1.5 million jobs are at stake—which is the subject of the next Jobenomics Year Ahead posting “Labor Force Overview.”

[14] The Commission on the Theft of American Intellectual Property, May 2013 Report and 2017 Update, http://www.ipcommission.org/report/