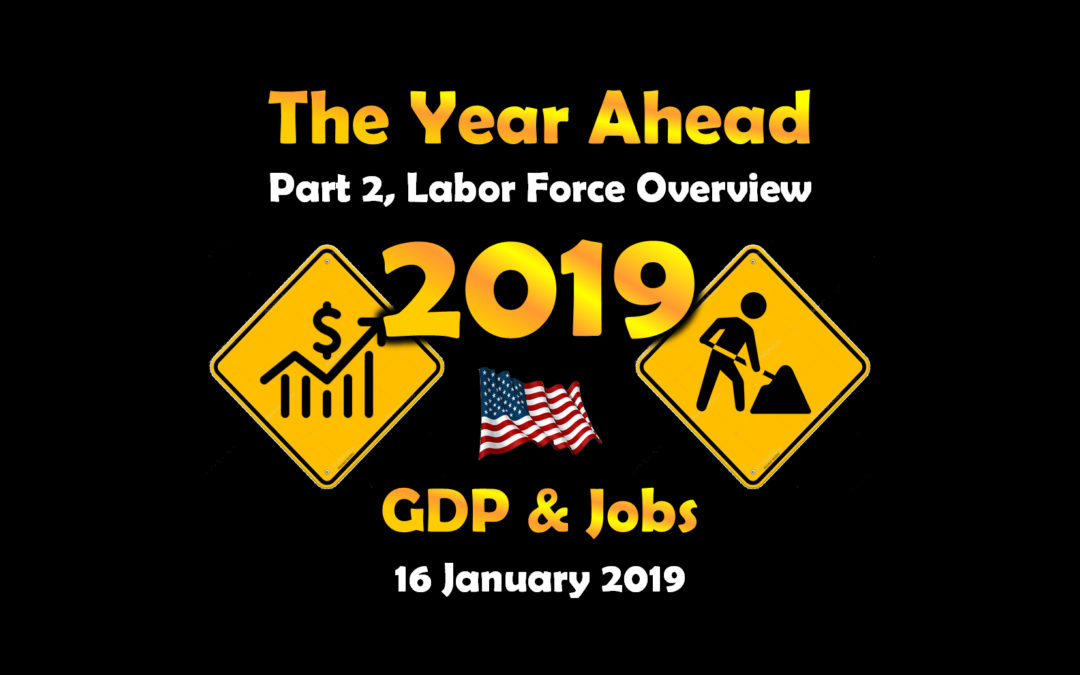 The United States consistently produced tens of millions of new jobs for six consecutive decades from the 1940s through the 1990s.  The bottom fell out in the decade of the 2000s with a net loss of 1 million jobs.  Consequently, it is critical that a significant number of new jobs are created this decade and beyond for the U.S. economy to prosper. (Download this Posting)

Employment increased by 20.5 million workers from 2010 to 2018, which is a vast improvement over the previous decade that lost 1 million jobs.  This level of job creation is on par with the actual job creation numbers in the 1970s, 1980s, and 1990s.

President Trump’s goal of creating 25 million new jobs over the next decade is a conservative and realistic goal.  Production of 25 million new jobs per decade is needed to keep the economy growing, accommodate an expanding population, and to maintain a healthy “natural rate of unemployment” between 4.5% and 5% that allows for industry changes, technological disruption, new labor force entrants and workers the freedom to search for better jobs.

In today’s highly-charged political environment, what people really want to know is how today’s president is performing against past presidents.  As color-coded by political party, of the twelve presidents since WWII, President Trump’s average monthly 201,083 job creation rate puts him in third-place following President’s Clinton and Carter actual job creation rates.  Adjusted for population size, President Trump would be in sixth place following Carter (325,981), Johnson (313,570), Clinton (305,305), Nixon (282,171), and Reagan (244,575).

From a labor force perspective, employment gains are only half the solution for prosperity. The other half deals with mitigating labor force losses due to unemployment and work-capable people voluntarily departing the workforce to a Bureau of Labor Statistics (BLS) category entitled “Not in the Labor Force.”

Knowing how the BLS defines labor force and accounts for the different labor force categories is essential to understanding labor force statistics and interpreting fact from fiction.  The basic concepts involving employment and unemployment are straightforward.  A later posting in this Year Ahead report will provide a detailed discussion on understanding government statistics.

From a Jobenomics viewpoint, it is vitally important to evaluate the net effect of all of three categories rather than emphasizing new jobs.  For example, increasing the workforce by 25 million new jobs (President Trump’s goal) makes little economic sense if 25 million people voluntarily leave the workforce for welfare and alternative lifestyles outside the traditional labor force.  Since the year 2000, the Not-in-Labor-Force grew by 27 million citizens.   For this reason, Jobenomics focuses on net labor force gains and losses from all three categories as opposed to the changes in the employment and unemployment categories, which is the focus of most policy-makers and media-pundits. 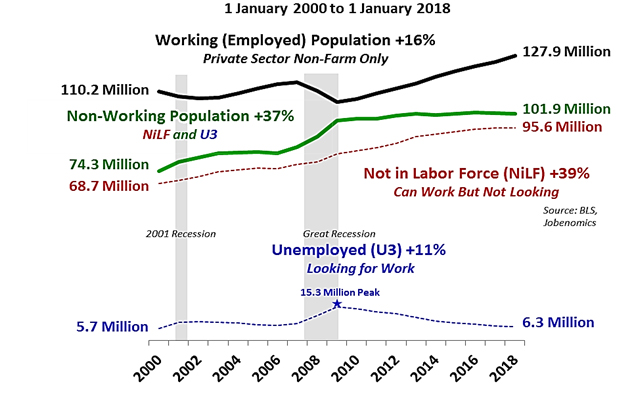 Sooner or later, the American people will figure out that the current way our government calculates unemployment is flawed.  Under the current system, it is theoretically possible for the United States to have a zero rate of unemployment if all unemployed people just quit looking for work and joined those in the Not-in-Labor-Force. To be classified as unemployed, one must be actively looking for work.  Frustrated or discouraged Americans who are capable of working but quit looking and voluntarily depart the workforce are accounted in a nebulous Not-in-Labor-Force category that few people comprehend.

Labor Force Gains and Losses Since 2000

From the beginning of the 21st Century (1 January 2000 to 1 January 2019), the American labor force is weaker by a net 8,161,000 workers.  This weakness is exacerbated by a population growth of 47 million additional American citizens present today compared to 2000 (282 million versus 329 million) plus the impact of a rapid rise of contingent part-time workers with a corresponding decrease in traditional full-time workers.

During the 8-years/96-months of the Obama Era (1 January 2009 through 31 December 2016), the U.S. labor force net loss was 205,000 jobs, with 10,595,000 entering the labor force, 14,583,000 voluntarily departing, and 3,783,000 fewer people recorded as officially unemployed.  It is important to remember that the first 21-months of President Obama’s first term in office, the Administration dealt with the Great Recession and post-recession recovery operations.  Obama’s next 75-months in office produced the longest run of consecutive labor gains since WWII when BLS record keeping began.  This 75-month run exceeded the previous record of 48-months that occurred from July 1986 to June 1990.

Now that the unemployment rate is hovering around historic low percentages, the number of unemployed citizens is not likely to decrease much lower.  Consequently, reversing the size and growth of the Not-in-Labor-Force population should be the Trump Administration’s highest workforce priority since this cadre is overwhelmingly the most abundant source for new American workers.

If the Administration cannot entice these sidelined citizens to enter the labor force, the number of unfilled U.S. jobs (currently 6.9 million) is likely to continue to grow unabated to the point that American businesses have to resume outsourcing labor to foreign countries or automate (robotics and artificial intelligence).  The only other likely course of action would be to increase the influx of skilled foreign workers via a merit-based immigration system.

Businesses create jobs that produce goods and services (GDP) to satisfy a nation’s needs and wants.  Consequently, a healthy business environment is essential to generating new jobs that are essential to fulfilling the demands of a growing population.  In comparison to population growth, American businesses are growing today at one-fourth the rate than they did in the 1990s.

The rate of U.S. job growth far exceeded population growth in the 1980s and 1990s, 18% and 34% respectively.  This extraordinary growth expanded the middle class and the belief in the American Dream.  It also provided income opportunity for tens of millions of people and cushioned the workforce during 26-months of recession.  Then the bottom fell out.

From 2000 to 2009, the U.S. population outgrew the workforce by 13% that was decimated by 26-months of recession.  During this era, the U.S. suffered a net loss of approximately 1 million jobs compared to population growth of 34 million people.  So far this decade, employment growth outpaced population growth by a meager 8% during a recession-free period that is expected to continue through 2019.

Private sector businesses create the types of jobs that generate economic growth.  Big business is the anchor tenant of the U.S. economy.  Small businesses are the engine of the economy, employing almost three-quarters of all Americans and creating three-quarters of new jobs this decade.  Startup businesses are the seed corn of the future economy.  Single-person nonemployer firms are the overlooked segment of the economy.  (Note: startups, micro, and small employer businesses and nonemployer firms are discussed in subsequent postings in this Year Ahead report.) 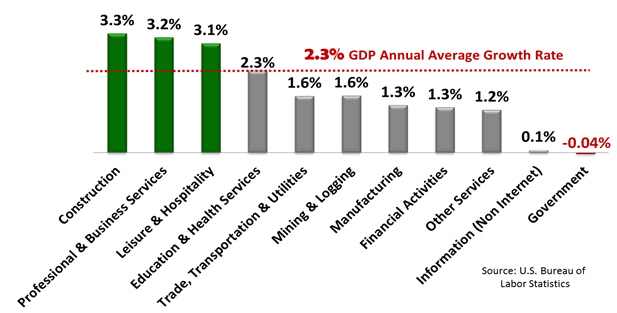 So far this decade, industry employment growth has been lackluster.  Only three of the eleven major U.S. supersectors reported by the BLS outperformed the 2.3% annual rate of GDP growth.  The manufacturing supersector has been one of the worst performers with an average of 1.3% with the durable goods sector averaging 1.6% and the nondurable goods sector at an abysmal 0.8% this decade.  However, during the 24-months of the Trump Administration, manufacturing jobs increased by 4.0% and should go higher if new trade agreements are successful.  As discussed in a later posting, Americans should not view manufacturing as a significant source of new jobs due to automation.

Second, the BLS reports that only 5% of people in the Not-in-Labor-Force cadre currently “want a job.” The remaining 95% are living by other means including public/familial assistance, retirement income, student loans, or alternative lifestyles in the underground and illicit economies, all of which places a significant strain on taxpaying working Americans. 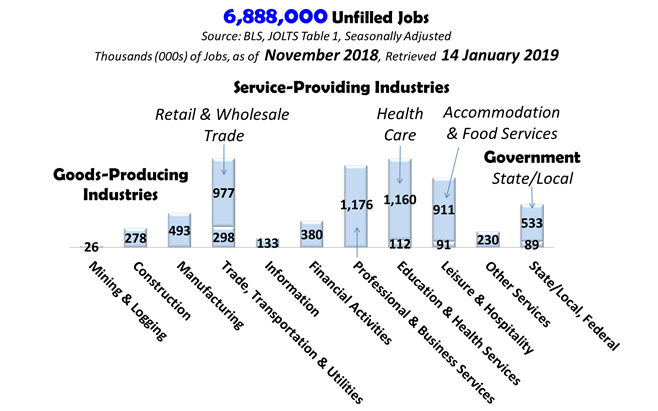 Lastly, the U.S. private sector now produces many more new jobs than they can fill due to a deficit of skilled labor.  Skilled personnel in the Not-in-Labor-Force could fill these vacant positions.  Per the 8 January 2019 BLS Job Openings and Labor Turnover Summary, 6.9 million open employment positions (one of the highest numbers in U.S. history—August 2018 was the highest with 7.3 million unfilled jobs) remain vacant.[5]  To provide a pathway for sidelined citizens to reenter the labor force, the Administration needs to increase its attention on small business creation at the base of the American socio-economic pyramid.

In conclusion, the non-government private sector workforce is the mainstay of the U.S. economy.  While growing, this workforce is overly burdened by a nonworking population (unemployed, Not-in-Labor-Force cadre, and people that cannot work). 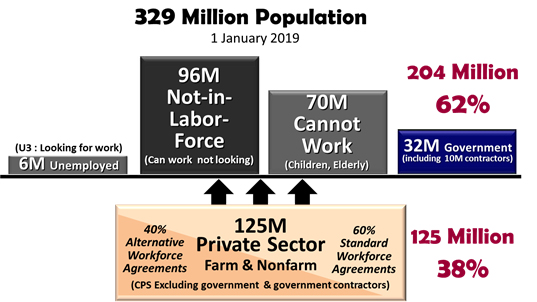 Out of a total population of 329 million Americans, 125 million non-government private sector workers support 32 million government workers and government contractors, 96 million people who can work but chose not to work, 70 million who cannot work (children, elderly and institutionalized citizens), and 6 million unemployed citizens.  Of the 125 million private sector workers, approximately 60% are standard full-time workers, and 40% are contingency workers (part-timers, freelancers, independent contractors, etc.) who make substantially lower wages, often with fewer or no benefits than their full-time counterparts.

While recent trends are slowly reversing America’s descent from an economic quagmire of the Great Recession, the U.S. economy is not yet sustainable without the continued strengthening of the U.S. non-government private sector labor force.  Excluding an estimated 10 million government contractors in the private sector, the private sector workforce now consists of 117,858,000 workers[6], which represents 38% of today’s total U.S. population of 329,096,000.[7]  The U.S. economy is not sustainable over the long-term with only 38% supporting an overhead of 62%.

[2] As of this writing the partial government shutdown of 800,000 jobs is an example of a potential major disruption.  If these workers continue to be paid as currently planned, employment numbers should not be impacted with the exception that the indirect workforce (especially small business) will experience a disruption.  A long-term shutdown is a different story.  The Mueller Investigation could also upend the Trump Administration’s progress of growing the economy and jobs.