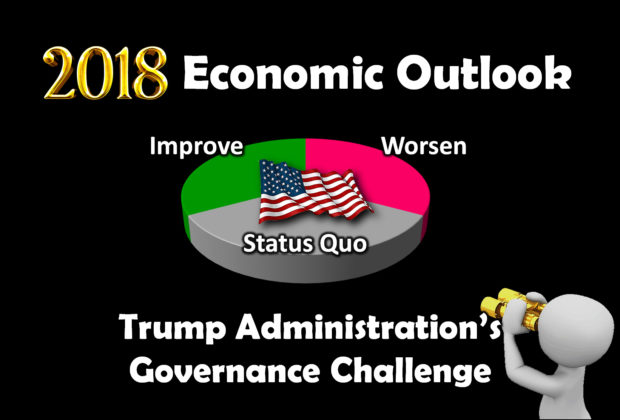 Governance: Trump Administration, Fiscal Policy (Congress) and Monetary Policy (The Fed).  The Jobenomics 2018 U.S. Economic Outlook predicts an equal probability (33.3%) for economic improvement, maintaining the status quo or an economic slowdown in 2018.   This assessment is based on a detailed analysis of six strategic considerations: Economy, Business, Labor Force, Governance, Domestic Disruptors and International Disruptors. This posting deals with the outlook for the Trump Administration’s Governance Challenge in 2018.  The entire 60-Page Jobenomics 2018 U.S. Economic Outlook report can be downloaded free from the Jobenomics Library.

Good governance inspires.  Bad management discourages.  Given Washington’s bitter political divide, governance is a serious issue.  From an economic perspective, 2018 is very much in question.

Henry Kissinger once told this author, “to remain king of the mountain people below you must want to hold you up even if they don’t like you.”  Since WWII, the United States has been the king.  U.S. policy-makers and decision-leaders must unify under a common cause to retain the benefits of our current economy.  Unfortunately, special interest groups and identity politics present a mounting challenge to common cause and civility.

In today’s anti-establishment and iconoclastic world, governance is not for wimps.  Perhaps, this is the reason that America voted for President Trump as well as other countries that selected authoritative nationalistic leaders.  Even devout globalists are avidly seeking superstate champions who will administer economic and foreign policy on a global basis.

Trump Administration.  Love him or hate him, President Trump is the most influential (possessing a compelling force to affect the actions, behavior, and opinions of others) leader in the world today.  The one fact that everyone accepts is that President Trump sucks out all the oxygen in any room he enters or any location that receives his tweets.

The Trump Twitter Archive is a repository of 10,766 Donald J. Trump tweets since he declared his candidacy on 16 June 2015 to the date of this publication).  During his first full year in office, President Trump tweeted 2,567 times for an average of 7 tweets per day.  Based on loud outcries from the global elite, he is more than just influential—he is transformative.  Few chambers in today’s political establishment are sacrosanct from the President’s transformational ambitions.

As such, it is almost impossible to predict if the U.S. economy will get much better or much worse under his tenure.  President Trump documented (tweets) what he feels and unabashedly says what is on his mind.  The President is unlikely to change in 2018.  However, the bandwidth of economic responses to his warrior-spirit ranges from getting much better to much worse in 2018.  To a significant degree, the U.S. economy will parallel Trump’s rise or fall in the year(s) ahead.

Donald J. Trump’s John Wayne-style and George Patton-aggressiveness could enable the Trump Administration to upend Washington’s business-as-usual mentality to make the U.S. economy more competitive and efficient than ever.  On the other hand, America has evolved into an ultra-polarized nation with many jealously and ferociously guarded fiefdoms.

Unfortunately, the ideological divide is so vast and acrimonious that “draining the swamp” in Washington may not produce an adequate return on investment compared to draining other swamps in major American communities—especially inner-city communities—that desperately need the power of the Presidency to effect change and rehabilitate urban ghettos.  Moreover, he is more accepted and energized by the proletariat-leaders than the aristocratic-Washington establishment.

Donald J. Trump is a Washington outsider. His best performances are outside the Washington beltway.  His 50-state rallies generated impassioned enthusiasm in overflowing crowds.  President Trump even performs well in hostile foreign environments.

President Trump’s first overseas venue began and was well-received in Saudi Arabia, a country angered by his strident rhetoric on Islam.  World leaders at the 2018 Davos World Economic Forum braced for a bombastic Trump but were pleasantly pleased with a businessman interested in making win-win deals.  Rather than depleting his energy in rope-a-doping Washington, the President should get out of town more often.

The Jobenomics National Grassroots Movement urges the President to focus on U.S. economic, community, business and workforce development.  Blighted and economically-depressed inner-cities present an ideal opportunity for executing his economic and job creation vision.  Based on Jobenomics experience in urban renewal and meetings with thousands of Democrat and Republican community leaders, President Trump’s take-no-prisoners demeanor and real estate development expertise would greatly benefit underserved and marginalized communities.  President Trump has the élan and credentials to rehab communities.  If he can turn swampland into luxury resorts, he can undoubtedly revamp blighted areas.

President Trump has learned from his many deals that it takes as much energy to manage a little deal as a big deal that has a much grander upside.  Urban renewal has a considerable upside.  During his campaign, Candidate Trump articulated his Urban Renewal Agenda to an African-American audience in Charlotte, North Carolina.  “It is great to be here in Charlotte to discuss an issue that means so much to me.  That is the issue of urban renewal, and the rebuilding of our inner cities…and to provide a new deal for Black America.”

The President’s campaign promise of a new deal for Black America is grounded in three principles: safe communities, great education, and high-paying jobs.”  Quoting Candidate Trump from his October 2017 speech in Charlotte, his vision of a new deal includes:

“Tax holidays for inner-city investment”, “new tax incentives to get foreign companies to relocate in blighted American neighborhoods”, “federal disaster designation for blighted communities in order to initiate the rebuilding of vital infrastructure”, “demolition of abandoned properties”, “increased presence of law enforcement”, “financial reforms for credit to pursue their dreams in business and create jobs”, and “encourage small-business creation by allowing social welfare workers to convert poverty assistance into repayable but forgive-able micro-loans.”

Now that the President has an established Cabinet and agenda, perhaps it is time for President Trump to get back to his roots rejuvenating decaying neighborhoods.  By doing this and employing the full power of the Presidency, he can transform the hardest hit parts of America and help close political and racial divides that separate people that he was elected to serve.

President Trump is more of an entrepreneur than a politician.  An entrepreneur tends to be intuitive, risk-taking, and deal-making.  Politicians usually pursue a path of risk-avoidance, consensus-making, and number-crunching.

President Trump has the disposition, skills, dauntlessness, and forcefulness to do “a really big deal”—perhaps the most prominent American deal ever—by raising over 100 million inner-city denizens out of poverty, or near poverty, via a massive urban renewal program.

A massive urban renewal program would incorporate all the tenets of the Trump Administration’s economic and job creation plan.  It also would be a fertile proving ground for President Trump’s minority, law enforcement, crime, and immigration initiatives.  By lifting economically-distressed communities, the entire country would benefit economically.

Standby for the next posting on Fiscal Policy (Congress) and Monetary Policy (The Fed), or download the entire 60-Page Jobenomics 2018 U.S. Economic Outlook at the Jobenomics Library.