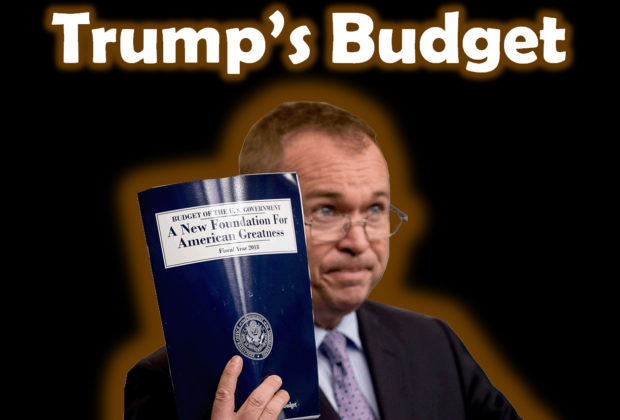 Perhaps the most striking theme of the Trump FY2018 Budget Request is that the Trump Administration will attempt limit national debt increase to only $3.2 trillion over 10-years as opposed to the $6.1 trillion increase planned by Obama Administration.  Moreover, President Trump wants to close the federal spending/receipts gap by dramatically reducing non-defense discretionary and means-adjusted welfare spending and balance the budget by the end of the decade.

As expected, Trump critics and opposition groups reacted strongly against this dramatic change in public policy calling the President’ budget “dead on arrival”, a “sledgehammer to the American Dream” as well as number of other juicy expletives meant to defame or upend the Administration, and, for some Obama loyalists, to impeach the President.

To show the dichotomy between the agenda of the Obama and Trump Administration’s fiscal agenda, one should briefly compare the highlights of Obama FY2017 and Trump FY2018 budgets.

According the President Obama’s FY2017 Budget request, the U.S. federal budget outlays (spending) in 2017 were projected at $4.1 trillion and receipts of $3.6 trillion for a deficit of $503 billion. $2.6 trillion (63%) was programmed for mandatory welfare and entitlement programs including $967 billion on Social Security, $598 billion on Medicare, $386 billion on Medicaid and $651 billion on other social programs.  Discretionary defense and non-defense spending totaled $1.2 trillion (30%) with the remaining $303 billion was designated for net interest expenses.  By 2026, mandatory federal spending would increase to $4.3 trillion consuming 67% of federal spending.  According the Obama FY2017 Budget, national debt would increase $6.1 trillion from today’s $20 trillion to slightly over $26 trillion by 2026.

From a Jobenomics perspective President Obama’s budget projections were exceedingly optimistic assuming an annual U.S. GDP growth of 53% over the forecast period (from $18.5 trillion GDP in 2016 to $28.3 trillion in 2026)—a wildly optimistic assumption considering the Obama Administration 8-year GDP growth average of 2%.  If GDP growth remained at the 2% level over the 2017 to 2026 period, the national debt increase would likely have been double the projected $6.1 trillion due the continuance of a slow growing economy, tepid labor force and income growth and insufficient government income/tax receipts.

According the President Trump’s FY2018 Budget request, the U.S. federal budget outlays (spending) in 2018 are projected at $4.1 trillion and receipts of $3.7 trillion for a deficit of $440 billion. $2.5 trillion (62%) is programmed for mandatory welfare and entitlement programs including $1,005 billion on Social Security, $582 billion on Medicare, $404 billion on Medicaid and $570 billion on other social programs.  Discretionary defense and non-defense spending request is $1.2 trillion (30%) with the remainder being $315 billion for net interest expenses.  By 2027, mandatory federal spending would increase to $3.9 trillion consuming 69% of federal spending.  According the Trump FY2018 Budget, national debt would increase $3.2 trillion from today’s $20 trillion to slightly over $23 trillion by 2027.

From a Jobenomics perspective President Trump’s budget projections assume U.S. GDP growth of $19.2 trillion in 2017 to $31.0 trillion in 2027, a 62% per year growth rate over the budget forecast period—a less wildly optimistic assumption considering the Trump Administration pledge for GDP growth average of 4% over the next decade as result of the Administration pledges to reduce tax, regulatory environment and onerous trade deals, government spending as well as implementation of a host of pro-business incentives.

U.S. Federal Budget Program Projections As A Percent of GDP

As circled above, the three areas of greatest concern by Trump critics and opposition groups are: Non-Defense Discretionary Spending, Medicaid and Other Social (numerous, education, welfare, housing, and employment) programs.  Comparing the FY 2017/2018 budgets, the difference is minimal since the Trump budget is only 0.1% greater than the Obama budget request.  The major difference is in the out years. Comparing the FY 2026/2027 budget projections, the cuts amount to a collective 2.9% (Non-Defense 0.9%, Medicaid 0.5% and Other Social 1.3%).  GDP in 2026/27 is estimated by both Presidents to be in the range of $30 trillion, so a 2.9% cut would equate to around $870 billion.  $870 billion sounds like an awful lot of money.  On the other hand, a meager 2.9% cut to a swollen federal budget seems like way too little in an era where consumers turn their noses up at a proffered 10% discount.

According to the Center on Budget and Policy Priorities (CBPP), an American think-tank that analyzes the impact of federal and state government budget policies from a liberal/progressive political perspective, Trump’s budget is deemed “radical” and “harmful”, where “millions would lose health insurance”, basic assistance would sustain “deep cuts” and government services would sustain “historic declines”.  CBPP includes in their list of harmful cuts over the next 10-years: $1.6 trillion cuts to non-defense discretionary programs including education, scientific research, public health, housing assistance, and basic government operations; $1.25 trillion from “repeal and replace” Obamacare that would potentially take health insurance from 23 million people; a 25% or $193 billion reduction from SNAP (food stamps); and approximately $100 billion from a host of means-adjusted welfare programs like Social Security Disability Insurance, Supplemental Security Income and Temporary Assistance for Needy Families.

At the opposite side of the ideological spectrum, The Heritage Foundation, an American think-tank that promotes conservative public policies and traditional American values, states that President Trump’s pledge to balance the budget is a “laudable and important”, cuts to Medicaid, welfare and disability programs are “sensible reforms” and prioritizing national defense is being done in a “fiscally responsible way, with offsetting cuts to domestic programs that are redundant, improper, or otherwise wasteful.”

Ultimately, Americans will have to choose between security, governance and social safety nets.  In many ways, the decision has already been made considering the swelling ranks of poor, marginalized and able-bodied citizens that cannot work or chose not to work.  Unless the United States implements a national initiatives that will enable mass-production of small businesses, that currently employ the vast majority of Americans, the American electorate will likely vote for policy-makers that are predisposed to increasing social program spending.  In other words, if President Trump can deliver on his pledge to create 25 million net new jobs and boost GDP growth to an enduring 4%, he will be considered a great president.  On the other hand, if most of these new jobs do not materialize, if these job are offset by voluntary workforce departures (like happened in the Obama Administration), or if GDP continues to grows at a sclerotic 2% rates, the Trump presidency probably will be considered a failed presidency and likely usher in an era of “professional” politicians that are more amenable to social and socialistic-type programs.