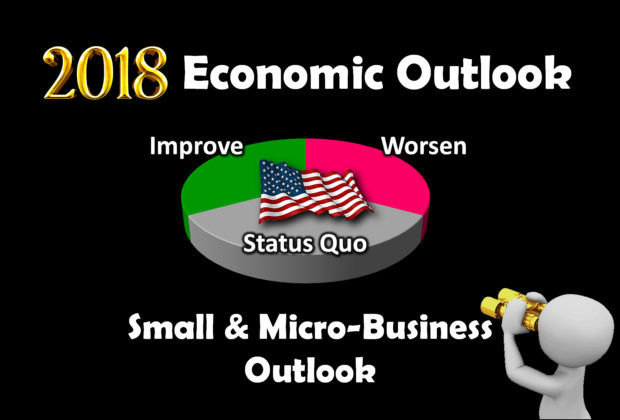 Business: Big, Small, Micro, and Startup Business Assessment.  The Jobenomics 2018 U.S. Economic Outlook predicts an equal probability (33.3%) for economic improvement, maintaining the status quo, or an economic slowdown in 2018.   This assessment is based on a detailed analysis of six strategic considerations: Economy, Business, Labor Force, Governance, Domestic Disruptors and International Disruptors. This posting deals with the outlook for Small & Micro Businesses.  The entire 60-Page Jobenomics 2018 U.S. Economic Outlook report can be downloaded free from the Jobenomics Library

Relying solely on big business for economic and workforce prosperity is a 20th Century paradigm.  A big business dominant approach to economic and workforce development will not work in the 21st Century—an age of economic growth dominated by the emerging digital economy and widespread technological advances.  21st Century businesses are less painful to start than at any time in history.   Digital and network technology levels the playing field for small businesses.  Digital startups are 100-times easier to create at one-tenth the cost than traditional startups.

According to the Kauffman Foundation, the preeminent economic growth and entrepreneurship non-profit organization, most city and state government policies that look to big business for job creation are doomed to failure because they are based on unrealistic employment growth models.  “It’s not just net job creation that startups dominate.  While older firms lose more jobs than they create, those gross flows decline as firm’s age.  On average, one-year-old firms create nearly 1,000,000 jobs, while ten-year-old firms generate 300,000.  The notion that firms bulk up as they age is, in the aggregate, not supported by data.”

While Jobenomics addresses big business and government employment trends, its principal focus is on highly-scalable small and micro-businesses that employ the vast majority of Americans and create an enormous amount of new jobs. For 2018, Jobenomics believes that the TCJA will encourage small and self-employed growth, which, in turn, promotes economic and labor force growth.  Jobenomics also asserts that small and micro-businesses are producing half as many new jobs as they did in the recent past.  The result is a loss of over ten million jobs over the last decade since the small business engine is operating at half capacity.

According to the U.S. Small Business Association,

Jobenomics classifies “small business” as having 1-499 employees (the definition supported by the U.S. Small Business Administration), medium-sized business as 500-999 and large businesses as 1000+ employees.  Also, Jobenomics defines micro-businesses as having 1-19 employees, which includes self-employed individuals.

During the depth of the Great Recession in February 2009, small businesses laid off 632,000 people in a single month, which is indicative of the hazards of a stalled small business engine.  Twenty months later, the small business engine was hitting on all cylinders and generated a peak of 312,000 jobs in October 2010.  Since this post-recession peak to today, small business job creation dropped 38% to 194,000 in December 2017, a net monthly difference of 118,000 jobs.

A decade consists of 10-years or 120-months.  Consequently, over a 120-month period, a deficit of 118,000 jobs equates to 14 million fewer jobs.  In other words, if America’s small business engine chugged along at the job creation speed that it did in October 2010, the United States would have generated 14 million additional jobs by October 2020.  If the U.S. small business engine produced jobs at the 3-year (2005 through 2007) average rate of 144,000 jobs per month, as shown, 17 million new jobs would have been added by December 2017.

The average micro-business job creation over the first year of the Trump Administration was 149,000 jobs per month.  If maintained, small businesses can create 19 million out of the 25 million jobs, or three-fourths of the employment opportunities that President Trump promised.  With this kind of engine power, it is surprising that Washington lavishes attention on big business while giving lip service to small business.

If the small business engine had heart, it would be a micro-business. Most micro-business are self-employed firms (one-person incorporated or unincorporated), family businesses (mom-and-pops) or partnerships.

Sadly, the U.S. micro-business heart is suffering from a form of atherosclerosis (narrowing or blockage of the arteries) as indicated by a 58% decline since the post-recession peak.

After conducting dozens of meetings on Capitol Hill, this author concludes that the overwhelming number of Washington politicians are comfortable collaborating with a CEO of a billion-dollar corporation but uncomfortable with entertaining 100-owners of million dollar companies.  While many perceive the reason for this distinction is that, as opposed small businesses, big business can afford lobbyists and substantial campaign contributions.  Jobenomics believes this perception is only partly accurate.  The main reason involves Washington’s 20th Century big business mindset.  Most politicians just do not understand the business/economic equation and naturally assume that big businesses produce the most jobs as well as high-paying jobs with lots of benefits.  Both these assumptions do not hold water in the 21st Century marketplace.  Politicians, who claim to understand the business/economic equation, most often view it through a big business lens.  Few serial entrepreneurs are found inside the Washington beltway.

Micro-businesses are also the heart the U.S. economy.  Mom-and-pop businesses are essential to local communities.  They are the type of enterprises that hire the unemployed and give part-time jobs to high schoolers and other entry-level individuals who want to work.  Continued deterioration and denigration of micro-businesses can only lead to economic stagnation.

Unfortunately, most of the earnings generated by pass-through entities are not by mom-and-pop businesses but by high net-worth individuals (e.g., hedge fund managers, management consultants, and real estate executives) who self-incorporate as an LLC or S-Corp to reduce their tax burden.  While the TCJA includes “anti-abuse measures” to ensure that only owners of “bona fide” businesses claim the 20% rate, abuse is likely to grow now that a new “territorial system” exempts foreign profits by U.S. business.  A shrewd Wall Street hedge fund manager or real estate broker can start a pass-through business on a Caribbean island to reduce their tax burden and deduct business expenses while enjoying Mai Tais on the beach.

While the Jobenomics outlook for small and self-employed business is positive throughout 2018, it is less bright than it could be.  Washington and corporate America need to place significantly more attention on small business development and sustainment.  Tax cuts will help but are not the solution to the problems facing small businesses.  Proposed Administration’s small business “association health plans” will also help but yet are insufficient.

America needs to rejuvenate the small business entrepreneurial spirit and create a worldview that small and micro-businesses are a viable alternative to the decreasing number of high-paying full-time jobs.  Women-owned and minority-owned businesses are deserving of far more attention than they receive today.  Additionally, digitally-savvy Screenagers (Generation Z) are suited for starting micro-business tailored to meet the needs of the emerging digital economy and contingent labor force.  If the 29.6 million American small businesses created or hired only one net new employee over the next several years, Trump’s 25 million new jobs goal could happen in a much shorter timeframe than he currently envisions.

Standby for the next posting on Startup Businesses, or download the entire 60-Page Jobenomics 2018 U.S. Economic Outlook at the Jobenomics Library.