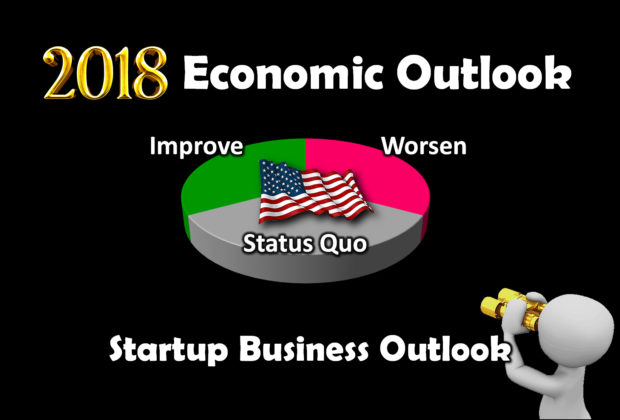 Business: Big, Small, Micro, and Startup Business Assessment.  The Jobenomics 2018 U.S. Economic Outlook predicts an equal probability (33.3%) for economic improvement, maintaining the status quo, or an economic slowdown in 2018.   This assessment is based on a detailed analysis of six strategic considerations: Economy, Business, Labor Force, Governance, Domestic Disruptors and International Disruptors. This posting deals with the outlook for U.S. Startup Businesses.  The entire 60-Page Jobenomics 2018 U.S. Economic Outlook report can be downloaded free from the Jobenomics Library.

Relying solely on big business for economic and workforce prosperity is a 20th Century paradigm.  A big business dominant approach to economic and workforce development will not work in the 21st Century—an age of economic growth dominated by the emerging digital economy and widespread technological advances.  21st Century businesses are less painful to start than at any time in history.   Digital and network technology levels the playing field for startups and small businesses.  Digital startups are 100-times easier to create at one-tenth the cost than traditional startups.

According to the Kauffman Foundation, the preeminent economic growth and entrepreneurship non-profit organization, most city and state government policies that look to big business for job creation are doomed to failure because they are based on unrealistic employment growth models.  “It’s not just net job creation that startups dominate.  While older firms lose more jobs than they create, those gross flows decline as firm’s age.  On average, one-year-old firms create nearly 1,000,000 jobs, while ten-year-old firms generate 300,000.  The notion that firms bulk up as they age is, in the aggregate, not supported by data.”

Without a viable business startup strategy, the U.S. economy is unlikely to prosper as it did in the 20th Century.  Small business creation is unquestionably the best way to create tens of millions of new jobs.

Due to the scant amount of attention from Washington and the American public, Jobenomics’ outlook for startup businesses is less bright than big and small businesses.  This assessment is somewhat ironic since startups are quicker and more affordable to launch than any time in history.  The internet, new technology, and digital economy level the playing field for startups, and provide startups with unfettered access to the global marketplace.

According to James McQuivey, a leading analyst tracking the development of digital disruption, as compared to the traditional companies, a digital firm is 100-times more straightforward to create since it has 10-times the number of innovators that can innovate at one-tenth the cost.   Additionally, digital startups are much faster than traditional startups, which is an exciting opportunity for those that can capitalize on the momentum of the emerging digital economy. More importantly, digital startups provide better-paying, longer-lasting jobs than other start-ups, and they contribute more to innovation, productivity, and competitiveness.

The digital economy (also known as the web economy, internet economy, network-centric economy, or the new economy) is an economy that built on digital and networked technologies.  In addition to new technologies, processes, and systems, the digital economy consists of various components including government (policy and regulation), infrastructure (internet, networks, telecom, and electricity), and providers (digital service, content, information and knowledge workers).

From a Jobenomics standpoint, there are at least eight unique but intertwined categories of economic activities that define the emerging Digital Economy:

Experts disagree about the date when the digital economy will usurp today’s traditional economy.  Given the current rate of growth and the transformative effects of new NTR technologies, processes and systems, the digital economy could be the dominant element of many nations by 2025.  The McKinsey Global Institute (MGI) lists twelve disruptive technologies that will affect billions of consumers and workers, and inject hundred trillion of dollars of economic activity into the Digital Economy by 2025.  If all MGI’s predictions come true, the total economic impact of these disruptive technologies would be $124 trillion which would be higher than the entire global nominal GDP of $86 trillion slightly less than $138 trillion of GDP purchasing power parity as calculated by the International Monetary Fund.

Business startups are the seed corn of the U.S. economy.  Without the planting and fertilization of these seedlings, the fields of American commerce would remain fallow.

Many startups turn into high-growth scaleups.  A scaleup is a development-stage business that wants to rapidly grow in term of market access, revenues, and employees.  In the 1980s, 16% of all startups scaled up to 50 employees in 10-years.  Today, only 11% of startups scale up to 50 employees in 10-years according to the Kauffman Foundation.   This differential equates to almost a one-third decline in job creation by the most powerful labor force generator in the U.S. economy.  Imagine if one of the three biggest U.S. companies (e.g., Apple, Alphabet, Amazon) failed to make the jump from startup to scaleup?

The Bureau of Labor Statistics’ Business Dynamics Summary states that the United States is now creating startups (firms less than 1-year old) at historically low rates, down from 16.5% in 1977 of all companies to 8% in 2014 (latest available data on new starts).  Quoting a Wall Street Journal analysis of BLS Business Dynamics data, if the U.S. were creating new firms at the same rate as in the 1980s, it would equate to more than “200,000 companies and 1.8 million jobs a year.”

In sharp contrast to U.S. policy-maker indifference, China’s leadership is aggressively mass-producing startup businesses to create jobs, increase domestic consumption and grow their economy.  In a March 2016 address to the National People’s Congress, Chinese Premier Li Keqiang boasted that in 2015 12,000 new companies were founded each day (4,380,000 per year or over 10-times the amount of the United States), an increase of 21.6% over the previous year.

Of the 3 million startup businesses created over the last decade, tens of thousands of ultra-high growth startups (called unicorns and gazelles) generated millions of net new jobs for America. According to the Kauffman Foundation, these fleet-footed startups account for 50% of all new jobs created.  Uber, Lyft, Airbnb, SpaceX, WeWork, and Pinterest are recent examples of unicorns—startup companies that rapidly achieve a stock market valuation of $1 billion or more.  A gazelle is a high-growth company (of any size, but usually a recent entrepreneurial startup) that increases revenues by over 20% per year over a period of four years.  The top-10 U.S. gazelles include Natural Health Trends, Paycom Software, Lending Tree, ABIOMED, MiMedx Group, Facebook, NetEase, Ellie Mae, Amazon.com and Arista Networks, according to Fortune magazine.

From a Jobenomics standpoint, the king of startups is Elon Musk.  South Africa-born, Canadian-reared, now an American citizen, Elon Musk is a visionary without parallel in recent history.   Musk’s most recognized startups are Tesla and SpaceX that have inspired millions and transformed the transportation industry.  Other Musk startups include PayPal (online payment system), SolarCity (renewable energy), Neuralink (neurotechnology), Zip2 (information network), OpenAI (artificial intelligence), The Boring Company (tunneling equipment), and Hyperloop (high-speed transportation).  Elon Musk is also the king of job creation with the vast majority of his 40,000 employees located in the United States.  This number of jobs is expected to increase significantly as Musk-inspired technologies and systems go mainstream.

The Jobenomics 20-part series, entitled President Trump’s New Economy Challenge provides a detailed analysis why the Trump Administration’s bold economic (4% GDP) and job creation (25 million new jobs) vision is likely to fall short due to Washington’s and America’s concentration on big business rather than small business startups and sustainment.  Startups are not only critical to net job creation; it is the primary determinant for GDP growth given the fact that big businesses are increasingly looking at automation and outsourcing (to foreign workers or domestic contingency workers) to replace conventional full-time labor force.  Consequently, America needs to create the conditions that will produce serial entrepreneurs like Elon Musk.

Standby for the next posting on the U.S. Labor Force, or download the entire 60-Page Jobenomics 2018 U.S. Economic Outlook at the Jobenomics Library.