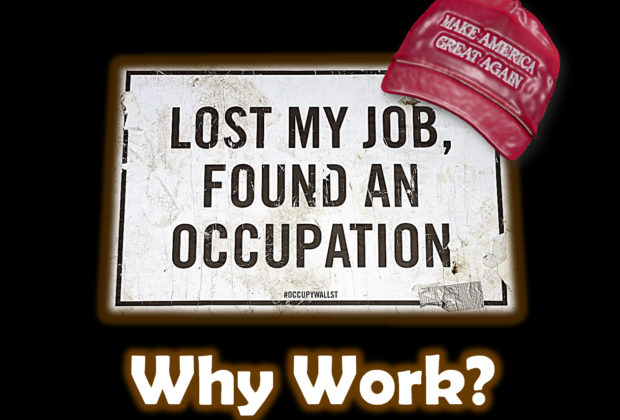 President Trump’s New Economy Challenge (Part 5 of 20).  Capable adults who are neither employed nor unemployed are not in the labor force.  Those who have no job and are no longer looking for a job are counted by the Department of Labor in the Not-in-Labor-Force category.  From January 2000 to January 2017, the Not-in-Labor-Force cadre grew from 68,655,000 to 95,102,000, an increase of 26.4 million citizens who more often than not become dependent on public/familial assistance.  Today, the number of citizens in the Not-in-Labor-Force is 12-times the number in the “Officially” Unemployed U3 category.  This great disparity is rarely addressed by policy-makers, analyzed by decision-makers or mentioned by the media’s talking-heads, all of whom focus almost entirely on the U3 Unemployment Rate that is now at a near post-recession low of 4.7%.  From a Jobenomics perspective, stemming the workforce exodus should be as high a priority for the incoming Secretary of Labor, Andrew Puzder, as achieving President Trump’s vision to create 25 million new jobs in the next decade.  This vision is unlikely to be realized if 14,722,000 American adults voluntarily drop out of the U.S. labor force as they did during the 8-years of the Obama Administration.

Since the turn of the Century in year 2000, the Not-in-Labor-Force cadre grew by 26.4 million citizens, an increase of 39%. Shockingly the exodus remains unabated.  More shockingly, this exodus largely goes unnoticed and under-reported by policy-makers and the media.  Why should anyone be shocked when able-bodied citizens question why they should even work anymore, especially when life on the dole is a much easier way to go?

Mitigation of voluntary labor force departures by adult workers to the nebulous Department of Labor’s Bureau of Labor Statistics (BLS) Not-in-Labor-Force category needs to become one of the highest priorities for the new Trump Administration.  It is not conceivable that President Trump’s plan for 25 million new jobs in the next decade will be offset by 15 million job losses—the current rate of voluntary workforce departures—or greater if another major financial downturn occurs.

The place for the Administration to start the exodus-mitigation process is by educating the American public, decision-makers, media-pundits and policy-makers on why so many people voluntarily depart the labor force and how the federal government accounts for the 95 million adults capable of working but choose not to work.

According to BLS, the basic concepts involving employment and unemployment are straight forward: citizens (over age 16) with jobs are employed; citizens are unemployed if they do not have a job, have actively looked for work in the prior 4 weeks, and are currently available for work; capable adults who are neither employed nor unemployed and are no longer looking for a job are counted as not in the labor force. The Not-in-Labor-Force cadre poses a significant threat to the success of the Trump Administration.

Trump campaign’s economist estimates “for each 1% in added GDP growth, the economy adds 1.2 million jobs. Increasing growth by 1.5% would result in 18 million jobs (1.5 times 1.2 million times 10 years) above the projected current law job figures of 7 million, producing a total of 25 million new jobs for the American economy.”  This optimistic projection simply will not happen unless the Administration gets a handle on the exodus of citizens who voluntarily leave the labor force for dependency on public welfare, familial assistance, and alternative (often illicit) lifestyles.

The next two graphics, derived from BLS data, shows the seriousness of the Not-in-Labor-Force threat to the success of President Trump’s economic and job creation vision.

To get a strategic snapshot of the state of the U.S. labor force, one must compare the Working Population (Employed) against the Non-Working Population (U6 Total Unemployed and Not-in-Labor-Force).  The latest BLS Employment Situation Summary reports that 123.1 million Employed Americans work in the private sector versus 109.8 million citizens who are Unemployed (U6, defined as total unemployed and underemployed people who are looking for work) and Not-in-Labor-Force (NiLF, defined as adults capable of working but choose not to work).

From 1 January 2000 to 1 January 2017, the Not-in-Labor-Force cadre grew from 68,655,000 to 95,102,000, an increase of 26,447,000 citizens who more often than not are dependent on public/familial assistance.  Today, the Not-in-Labor-Force exceeds the U6 Unemployed cadre by 6-times and 12-times the number of people enrolled in the U3 Unemployment category that is generally referred to as the “officially unemployed.”  This great disparity is rarely addressed by policy-makers, analyzed by decision-makers or mentioned by the media’s talking-heads, all of whom focus almost entirely on the “Official U3 Unemployment Rate” that is now at a near post-recession low of 4.7%.

Jobenomics contends that all Americans who are capable of work, regardless if they are looking or not, should be considered “Functionally Unemployed.” Functional is defined as capable of operating or working. An adult who is capable of working but chooses not to work should be considered unemployed for the same reason that “discouraged”, “marginally attached” and “part-time workers for economic reasons” are included in U4, U5 and U6 unemployment categories.

Evaluating whether a person wants to work rather than their ability to work is like treating a symptom rather than the disease. Sooner or later, the American people will figure out that the current way our government calculates unemployment is seriously flawed. Under the current system, it is theoretically possible for the U.S. to have a zero rate of unemployment while simultaneously having zero people employed in the labor force. Since Not-in-Labor-Force personnel are not counted as unemployed, the official unemployment rate could theoretically be zero if all unemployed people simply quit looking for work and joined those in the Not-in-Labor-Force.

Jobenomics further contends that unemployment rates should be reported as a percentage of the entire population as opposed to the Civilian Labor Force (defined by the BLS as the number of employed and unemployed), which is a rather arbitrary number based on the willingness to work or look for work. If calculated against the entire U.S. population, the combined rate of “functionally unemployed” would be at 34%, which is significantly higher than the 4.7% U3 or 9.2% U6 unemployment rates.

Unfortunately the U.S. Department of Labor and its Bureau of Labor Statistics has very limited data on people once they depart the labor force. During a bi-annual survey, people who did not work at all in the previous year are asked to give the main reason they did not work.  According to the BLS, “Interviewers categorize survey participants’ verbatim responses into the following categories: ill health or disabled; retired; home responsibilities; going to school; could not find work; and other reasons.”  In 2014, the latest data available from the BLS, out of a total 87 million people who did not work or did not look for work: 44.1% were retired (CPS does not provide an estimate of the number of people who are retired and has no standard definition of what it means to be retired), 18.6% were ill or disabled, 15.5% had home responsibilities, 18.3% were going to school and 3.5% expressed other reasons. Since the BLS is primarily interested in whether people are working or looking for work, does not ask why people are not seeking a job. “Our survey is designed to measure work and looking for work,” said Karen Kosanovich, a BLS economist. “We do not focus on people outside of the labor market.”

From a Jobenomics perspective, the explosive growth of people in the Not-in-Labor-Force Category is the most serious challenge facing the Trump Administration, American policy-makers and the American public.  Woefully, little is being done to address this challenge. Hopefully, our new Secretary of Labor, Andrew Puzder, will rise to the challenge.  Puzder, the former CEO of CKE Restaurants, a fast-food chain, is a person of considerable skills which will be discussed in Part 12 of this series.

About Jobenomics: Jobenomics deals with economics of business and job creation. The non-partisan Jobenomics National Grassroots Movement’s goal is to facilitate an environment that will create 20 million net new middle-class U.S. jobs within a decade. The Movement has a following of an estimated 20 million people. The Jobenomics website contains numerous books and material on how to mass-produce small business and jobs. Monthly website traffic exceeds one-half million hits, which is indicative of the high level of public interest regarding economic, business, labor force and workfare solutions. For more information, see Jobenomics Overview and the Author’s Biography.