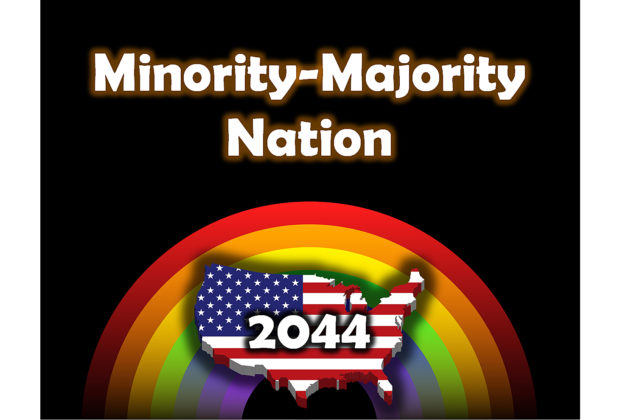 President Trump’s New Economy Challenge (Part 19 of 20).   President Trump’s Economic Plan estimates a 3.5% annual growth rate that will produce 25 million new jobs this decade.  To do so, the Trump Administration will need full support and engagement of America’s minorities to fulfill the President’s Urban Renewal Agenda.  Year 2011, marked the first year in U.S. history that minority births exceeded White births.  In 2015, over 50% of all U.S. children aged 5 years old were minorities.  By 2020, more than 50% of all U.S. children are expected to be part of a minority race or ethnic group.  By 2044, America will be a minority-majority nation.  California, Texas, New Mexico and Hawaii are already minority-majority states.  Minority-owned businesses are already the fastest growing group in the American business community.  Unleashing the potential power of minority business owners will greatly benefit the U.S. economy and help unite a race-divided nation.

As forecast by the U.S. Census Bureau, by 2044 minorities are projected to be in the majority (over 50% of the U.S. population) given current demographic growth rates.

From a Jobenomics perspective, Americans spend entirely too much time debating income inequality and inequities between White-haves and minority-have-nots.  As indicated by U.S. Census Bureau and U.S. Bureau of Labor Statistics data, the numbers of White-have-nots far exceed White-haves, and are comparable to minority-have-nots at the lower end of the wage scale.  On the other hand, based on projected demographic trends, minority job and wealth creation is essential to American economic prosperity and social stability as the United States transitions from a White-majority nation to a minority-majority nation.  The primary solution to enhancing minority labor force participation and increasing wealth in minority communities involves minority-owned business creation, which is growing significantly faster than White-owned businesses.

The Census Bureau performs a Survey of Business Owners twice each decade.  The 2011 Survey was conducted for business owners in 2007 and the 2015 Survey for 2012 owners.  This growth rate chart was developed by Jobenomics as a summary of these surveys to show the tremendous rate of growth for minority-owned firms during the Great Recession of 2007 to 2009 and the period of slow U.S. economic growth during the post-recession recovery.

All U.S., White, Black, Asian, Hispanic and All Minority (including other racial and ethnic minorities) firms are shown.  “Total Firms” include all firms from very big to very small nonemployer (e.g., the self-employed) businesses. “Employer Firms” employ a few to thousands of workers.

From 2007 to 2012, All U.S. “Total Firms” grew at 2%, White-owned firms decreased -4%, and All Minority-owned firms increased by 39%, which is incredible considering the austere times and onerous lending environment from financial institutions.  During this time period, Hispanic-owned firms grew at 47%, followed by Black-owned at 35% and Asian-owned at 25%.

From 2007 to 2012, the total number of minority-owned firms grew 5.8 million to 8.0 million firms, a 39% increase mainly due to nonemployer/self-employed firm growth.  In comparison, White-owned decreased during the same period.

The 2015 Census Bureau Survey of Business Owners also provides detail on sales, receipts and shipment values for all firms.  Minority firms did extremely well.  In 2007, All Minority-owned firms contributed approximately $1 trillion to the U.S. economy.  In 2012, this amount increased by a combined 53% to $1.6 trillion.  Asian-owned sales, receipts and shipment values increased during this period by 57%, followed by Hispanic-owned by 48% and Black-owned by 38%.

Stay tuned for the final installment in the President Trump’s New Economy Challenge series entitled, “Jobenomics Commitment to The Trump Administration” scheduled for release on 7 April 2017.