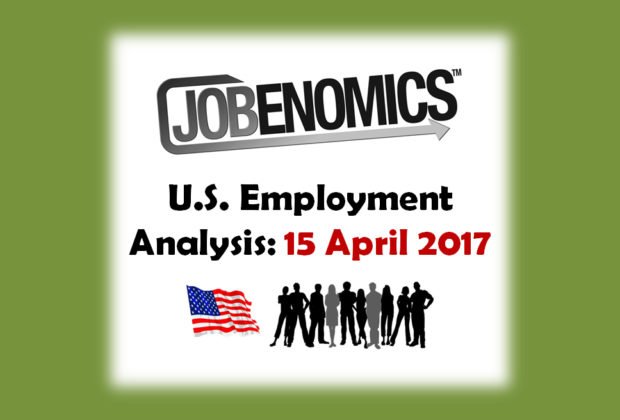 The two primary sources for U.S. labor force data are the monthly U.S. Bureau of Labor Statistics (BLS) Employment Situation Summary, a monthly summary of all U.S. government and private sector employment, and the ADP National Employment Report, a monthly survey of employment by 400,000 U.S. private sector businesses by the ADP Research Institute in collaboration with Moody’s Analytics.  The BLS’ March Situation Summary reported a disappointing 98,000 new jobs, which was less than half the number expected due to a large late winter storm that keep hundreds of thousands of people from work.  The ADP Report, released several days earlier, reported a resounding number of 263,000 new jobs—83% by small business.

Notwithstanding poor BLS March performance figures, overall labor force performance for the first 3-months of 2017 reflected a positive start for the new Trump Administration with the creation of over ½ million new jobs plus a significant reduction of the number of unemployed and voluntary departures to the U.S. labor force as discussed herein.

President Trump’s vision of a “dynamic and booming economy” ultimately depends on mass-producing business, especially small business, creation in order to generate 25 million net new jobs.  While the United States posted slow but steady gains during the post-recession era, the U.S. labor force is still 12,030,000 weaker today in terms of gainfully employed workers.  It is also important to note that today’s weakened labor force statistics is not adjusted for population growth of 43 million additional Americans compared to year 2000 (282 million versus 325 million).

From a Jobenomics standpoint, President Trump’s “bold plan to create 25 million new American jobs in the next decade and return to 4 percent annual economic growth” is an achievable goal but fraught with significant challenges as addressed in detail in the Jobenomics 130-page, 20-part series entitled President Trumps New Economy Challenge.

To get a strategic perspective of the state of the U.S. labor force and workforce issues facing the Trump Administration, one must compare the Working Population (Employed) against the Non-Working Population (Unemployed and Not-in-Labor-Force). 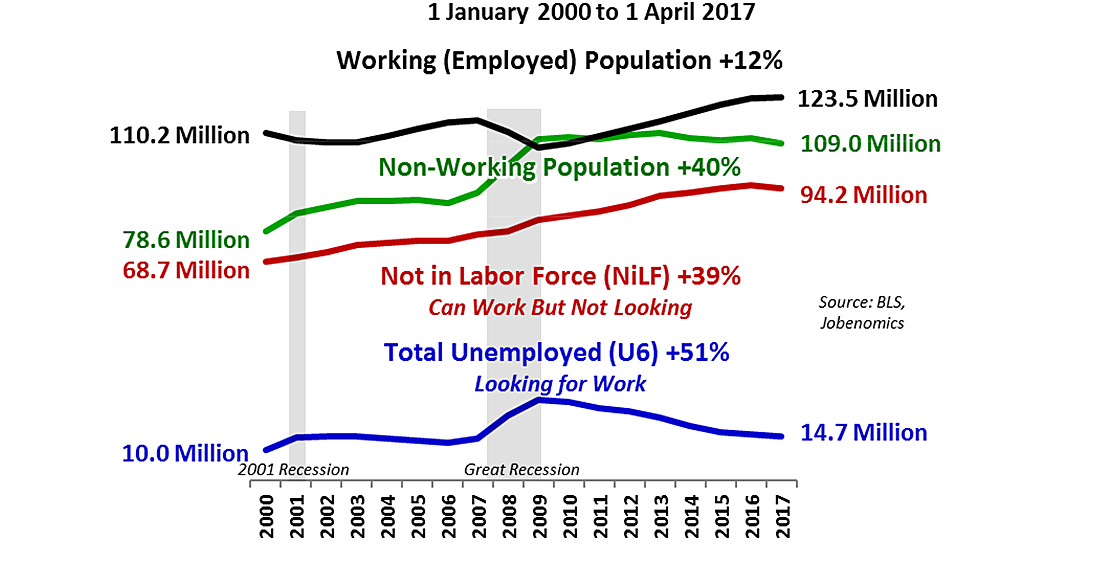 As shown, from 2000 to 2017, the Working (Employed) population rose by 12% compared to the Non-Working Population rise of 40%.  Jobenomics defines the Non-Working Population as Not-in-Labor Force (that rose by 39%) and Total Unemployed (which is still 51% higher today than year 2000).  If these trends continue, Jobenomics predicts that the U.S. Not-in-Labor-Force will equal the Employed population by the mid-2020s, or sooner if the United States suffers a major financial crisis.

The Bureau of Labor Statistics (BLS) Employment Situation Summary reported that last month (March 2017), 98,000 Americans entered the U.S. labor force, 23,000 more Americans were recorded in the BLS’ “Not-in-Labor-Force” category (a category reserved for able-bodied Americans who choose not to work and voluntarily depart the workforce), and 326,000 less citizens were categorized as officially unemployed, for a net workforce gain of 401,000 Americans.

From a quarterly perspective, BLS data indicates that over the first three months (January, February and March) of the Trump presidency, the net labor force gain was 1,749,000 (an average of 583,000 jobs per month), which represents 72% of all net labor force gains over the last year (2,437,000) and 13% of all gains in the 87-months since the beginning of the decade (13,576,000).  What is particularly noteworthy regarding President Trump’s first quarter labor force statistics is the drop of 889,000 people in the “not in the labor force” category (i.e., capable of working but not looking).  Apparently, the new Administration is giving people a reason to rejoin the workforce.  However, while very positive, this Trump-bump does not necessarily indicate a long-term trend.

Last month (March 2017), U.S. small business created 83.0% of all new U.S. jobs.  While most of the America’s and the world’s attention is focused on the Trump Administration’s big business focus (e.g., reshoring jobs and trade policies), it is small business that produced 218,640 (83%) out of the record 263,480 new private sector jobs last month.

In conclusion, during President Trump’s initial three months in office, the Administration has averaged 259,000 new jobs per month according to ADP data.  While it too early to predict whether or not this aggressive amount of job creation will lead to continued job growth above the 250,000 new jobs per month standard, initial indications are positive.

Notwithstanding initial indicators, U.S. economic growth depends on GDP growth that is dependent on labor force growth.  According the nonpartisan Congressional Budget Office’s 2017 to 2027 Budget and Economic Outlook report, “over the next five years, the monthly increase in nonfarm payroll employment, which is estimated to average 160,000 jobs in the first half of 2017, is projected to settle down to an average of 64,000 jobs.” If the CBO outlook is correct, the next decade is likely to produce only 9 million jobs, which is far short of President Trump’s projection of 25 million new jobs.   Last year’s BLS Employment Projections: 2014-24 Summary report forecasts that the United States will produce only 9.9 million new jobs over the next decade.

Jobenomics tends to agree with the CBO and BLS for the reasons discussed in the Jobenomics 130-page, 20-part series entitled President Trumps New Economy Challenge.  However, the Trump Plan can be amended to ameliorate the CBO and BLS projected shortfalls.  With proper leadership, the Administration can lift tens of millions of Americans out of poverty by making the following four structural changes to President Trump’s economic and job creation plan:

If the Trump Administration can achieve a sustainable 4% GDP in a stable global economy, Americans and the world will be euphoric.  This feat will not be easy.  The last year the United States breached 4% in a single year was 2001.  The last time that the United State reached 4% over ten consecutive years over the last 50-years was never (3.5% was the highest from 1976 to 1985).  If the Trump Administration can tie the 3.5% record over the next decade, they will be vindicated and worthy of much praise.  The Federal Reserve’s latest projection for U.S. economic growth is between 1.5% and 2.4% during the next four to five years.

Like citizens from Missouri, most American’s now claim the “Show-Me” sobriquet.  To date, Jobenomics has not seen adequate evidence from President Trump that the new Administration will be able to achieve his Administration’s lofty, but greatly needed, economic and job creation goals.  To this end, Jobenomics published a 20-part series (130-pages) on President Trump’s New Economy Challenge that is available to subscribers or purchase.

About Jobenomics:  Jobenomics deals with economics of business and job creation.  The non-partisan Jobenomics National Grassroots Movement’s goal is to facilitate an environment that will create 20 million net new middle-class U.S. jobs within a decade.  The Movement has a following of an estimated 20 million people.  The Jobenomics website contains numerous books and material on how to mass-produce small business and jobs.  Monthly website traffic exceeds one-half million hits, which is indicative of the high level of public interest regarding economic, business, labor force and workfare solutions.  For more information, see Jobenomics Overview.