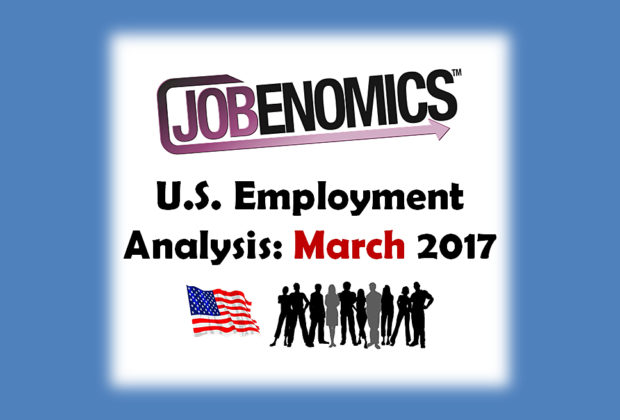 Since President Trump took office, U.S. employment gains have been impressive—a very positive start for the new Administration.  The two primary sources for U.S. labor force data are the monthly U.S. Bureau of Labor Statistics (BLS) Employment Situation Summary and the ADP National Employment Report, which is a monthly survey of 400,000 U.S. businesses by the ADP Research Institute in close collaboration with Moody’s Analytics.  For January and February 2017, the BLS calculates labor force (government and private sector) gains of 238,000 and 235,000 respectively.  ADP estimates 261,000 new private sector jobs were added in January and 298,000 February .  If the 8,000 new government jobs reported by the BLS were added to the new ADP private sector jobs in February, the ADP grand total would be 306,000, which would equate to a feat accomplished only twice in the last 131 consecutive months (11 years).  The question on everyone’s mind is this a temporary “Trump bump” or will it last throughout his Administration?

From a Jobenomics standpoint, President Trump’s “bold plan to create 25 million new American jobs in the next decade and return to 4 percent annual economic growth” is an achievable goal, but a goal fraught with significant challenges as addressed in detail in the Jobenomics 120-page, 20-part series entitled “President Trumps New Economy Challenge.”

President Trump’s vision of a “dynamic and booming economy” ultimately depends on mass-producing business, especially small business, creation in order to generate 25 million net new jobs.  While the United States posted slow but steady gains during the post-recession era, the U.S. labor force is still 12,393,000 weaker today in terms of gainfully employed workers.  It is also important to note that today’s weakened labor force statistics is not adjusted for population growth of 43 million additional Americans compared to year 2000 (282 million versus 325 million).

On 10 March 2017, the Bureau of Labor Statistics (BLS) Employment Situation Summary reported that last month (February 2017), 235,000 Americans entered the U.S. labor force, 176,000 less Americans were recorded in the BLS “Not-in-Labor-Force” category (a category reserved for able-bodied Americans who choose not to work and voluntarily depart the workforce), and 107,000 less citizens were categorized as officially unemployed, for a net workforce gain of 518,000 Americans.  This is a remarkable trend.  Rarely do all three labor force factors (gains, losses and voluntary workforce departures) trend in a positive direction.

Notwithstanding initial indicators, U.S. economic growth depends on GDP growth that is dependent on labor force growth.  The U.S. labor force produces goods and services that grow the economy, which is one of the primary indicators used to gauge the health of a country’s economy.  The U.S. economy is measured by either an income approach (compensation, profits, and taxes) or an expenditure approach (consumption, investment, government spending and net exports). Both approaches depend on robust goods-producing and service-providing jobs.

The Catch-22 is that jobs do not create jobs.  Businesses do.  While big business may be the backbone of the economy, small businesses and micro-businesses are the muscle that performs the bulk of the economy’s work.  Moreover, startup businesses are the DNA of the U.S. economy.  In terms of new starts (firms less than 1-year old), the BLS reports that the United States is now creating startup businesses at historically low rates, down from 16.5% in 1977 of all firms to 8% in 2014.   Quoting the Wall Street Journal, if the U.S. were creating new firms at the same rate as in the 1980s, it would equate to more than “200,000 companies and 1.8 million jobs a year.”

If the Trump Administration can achieve a sustainable 4% GDP in a stable global economy, Americans and the world will be euphoric.  This feat will not be easy.  The last year the United States breached 4% in a single year was 2001.  The last time that the United State reached 4% over ten consecutive years over the last 50-years was never (3.5% was the highest from 1976 to 1985).  Notwithstanding, if the Trump Administration can tie the 3.5% record over the next decade, they will be vindicated and worthy of much praise.

Like Missouri, most American’s now claim the “Show-Me” sobriquet.  To date, Jobenomics has not seen adequate evidence from President Trump that he will be able to achieve his Administration’s lofty, but greatly needed, economic and job creation goals.  To this end, Jobenomics is publishing a 20-part series (120-pages) on President Trump’s New Economy Challenge.  Many articles in this 20-part require a small subscription fee that will be used for the Jobenomics Urban Renewal projects to support small business and job creation for those who want to work or start a business at the bottom of America’s socioeconomic pyramid.  Non-series articles, like this one, are free.