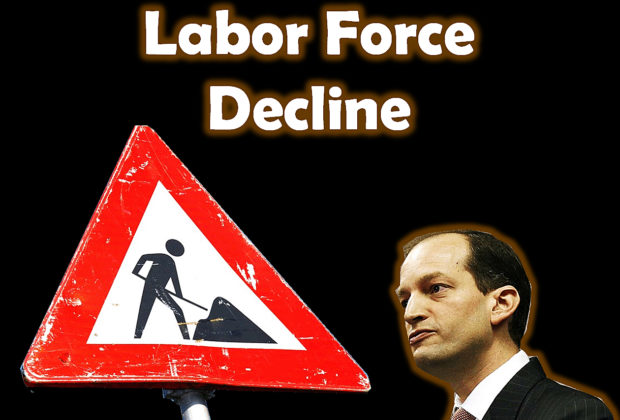 President Trump’s New Economy Challenge (Part 14 of 20).   One might think that the U.S. Department of Labor (DoL) main purpose would be a forward-looking organization that positions the U.S. labor force for major disruptive trends like the emerging digital economy, the contingent workforce and the massive exodus of able-bodied workers.  Unfortunately, the opposite seems to be the case.  By its own admission, the DoL “fosters and promotes the welfare” of the America’s 140 million workers and enforces several hundred federal laws and many thousands of federal regulations that cover the complete gambit of workforce activities for over ten million beleaguered American employers.   No wonder why, President Trump’s top two picks for Labor Secretary were both lawyers who will be in charge of a hodgepodge organizational chart of 30 bureaus, offices, agencies, administrations and other special interest labor force groups.  Trump’s first pick was Andrew “Andy” Puzder, a lawyer and fast-food CEO, who suddenly withdrew his nomination.   Trump’s second pick was Alexander Acosta, a cum laude Harvard Law School graduate, U.S. Court of Appeals law clerk, a Washington D.C. lawyer, an employment and civil rights law professor (George Mason University School of Law), a former collective bargaining and unfair labor practices official (National Labor Relations Board), a civil rights attorney (Assistant Attorney General for the Department of Justice Civil Rights Division), and a college law school dean (Florida International University).  From a Jobenomics perspective, the Trump Administration is going to need much more than a great lawyer to restore a U.S. labor force that is in a serious state of decline.

This chart is a snapshot the current state of the U.S. labor force in terms of current jobs in gray, new jobs in green and job losses in red.   In general terms, the U.S. labor force is in a much better position today than it was in during the Great Recession.  Seven private sector service-providing industries employ 71.2% of all U.S. workers (103,425,000) jobs, followed by federal, state and local governments that employ 15.3% of the workforce (22,223,000) jobs and by the three private sector goods-producing industries that employ 13.5% of the workforce (19,655,000).  Job gains occurred in all 10 private sector industries this decade.  Job losses occurred at all three levels of government (federal, state and local) this decade.  However, this is history.

In terms of new starts (firms less than 1-year old), the BLS reports that the United States is now creating startup businesses at historically low rates, down from 16.5% of all firms to 8% in 2014 (latest available data on new starts).  Based on a Wall Street Journal (WSJ) analysis of this recently released BLS report’s data, “If the U.S. were creating new firms at the same rate as in the 1980s that would be the equivalent of more than 200,000 companies and 1.8 million jobs a year.”  The WSJ also reports that share of employment at firms less than 1-year old has slipped from nearly 4% to about 2% of private-sector jobs from the 1980s to today.  Business startups are the seed corn of the U.S. economy.  Without the planting and fertilization of these seedlings the fields of American commerce would remain fallow.

Secretary Acosta’s Labor Force Challenge.  In regard to the decaying U.S. labor force, Jobenomics contends that the proper way to gauge the strength of the U.S. labor force (and the overall economy) is by evaluating employment rather than unemployment. The reason for this statement is relatively straightforward: working people provide the goods and services that grow the economy.  The more people that America puts to work, the stronger the economy gets.  As discussed in the “Why Work Anymore?” posting, the American people will figure out that the current way our government calculates unemployment is seriously flawed. The use of whimsical survey questions, like “do you currently want a job”, makes unemployment a poor barometer of U.S. labor force strength.

When evaluating U.S. labor force metrics, one should measure the workforce in relation to the entire population as opposed to current Department of Labor denominators like the Civilian Noninstitutional Population (which few citizens understand) or the Civilian Labor Force (which includes only working people or people looking for work, but does not include adults capable of working but choose not to work).

This chart, developed by Jobenomics using the latest U.S. Census Bureau and Department of Labor’s Bureau of Labor Statistics data, shows a number of topline employment metrics in relation to the U.S. population from 1 January 1980 to 1 January 2017.

The 1980s and 1990s were decades of robust job creation and a strengthening workforce.   In the two decades prior to the turn of the 21st Century, employment growth increased significantly faster than population growth (1980-1989: Employment Growth Rate was 27.3% versus a Population Growth Rate of 9.7%, and 1990-1999: Employment Growth Rate 44.2% versus Population Growth Rate 10.5%).  As a result, the 1980s and 1990s produced an average of about 20 million net new jobs in a population that was 52 to 78 million people smaller than today.  Equally important is the fact that these jobs were produced during two decades that suffered 30 months of recession.

The 17-year period from year 2000 to today can be characterized as an era of weak job creation and a decaying workforce.  During this era, employment growth decreased significantly faster than population growth (2000-2009: Employment Growth Rate was -0.8% versus a Population Growth Rate of 12.6%, and 2010-2017: Employment Growth Rate 11.1% versus Population Growth Rate 18.9%).  The 1980s was a particularly bad decade with negative employment growth due to 26-months in two recessions, the second of which was the 18-month long Great Recession of 2007-2009 that precipitated a global financial crisis.  The most recent seven year period were years of sclerotic job creation despite the fact the U.S. posted the longest streak of continuous job growth on record.

However Secretary Acosta’s Bureau of Labor Statistics may not be as confident as their new boss’ President regarding America’s ability to generate the amount of jobs needed to fulfill the Trump Administration vision.  Robust labor force growth is not currently forecast by BLS employment projections.

Last year’s BLS Employment Projections: 2014-24 Summary report forecasts that the United States will produce only 9.9 million new jobs over the next decade, which is a shortfall of 10.1 million net new jobs needed to accommodate new workforce entrants and maintain full employment.  9.9 million jobs is inconsistent with the new Administration’s 25 million new job goal, especially in the area of manufacturing and the two other goods-producing industries (construction and mining) which were highly promoted during the Trump campaign.  The BLS report projects meager gains of 56,500 jobs in goods-producing industries, 9,263,600 jobs in services-providing industries, 26,900 jobs in agriculture/forestry/fishing industries and 579,300 jobs in the non-agricultural self-employed workforce over the next decade.

Click to read the rest of the articles in a 20-part series on President Trump’s New Economy Challenge. Note: many series articles require a small ($5) subscription fee. Non-series articles and Jobenomics project reports are free at Jobenomics.com. All subscription fees are directly (100%) applied to the Jobenomics Urban Renewal Programs. Donations to revitalizing blighted inner-cities are most welcome.