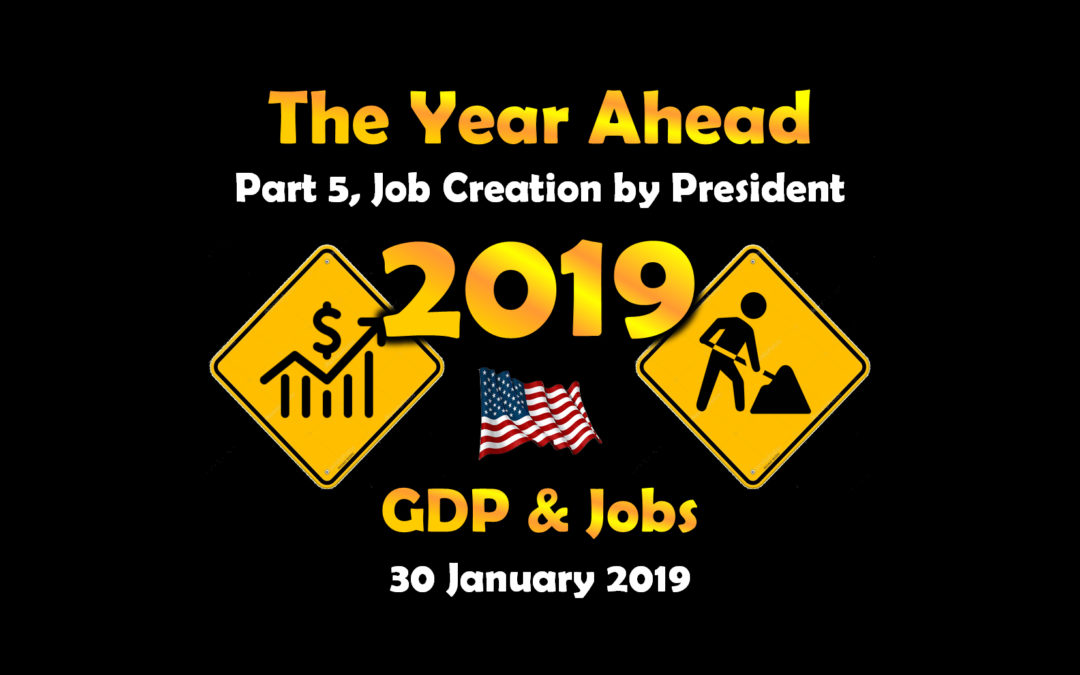 In today’s highly-charged political environment, what people want to know is how today’s president is performing compared to past presidents.  Of the twelve presidents since WWII, President Trump’s average 201,083 monthly job creation rate places him in third-place following President’s Clinton and Carter.  However, U.S. job creation is now gaining sufficient momentum to achieve President Trump’s 25 million new jobs objective over the next decade.  In the 24-months since President Trump took office, the Administration averaged 201,083 new jobs per month, which is twice the monthly amount of the Obama Administration (110,365) and over 9-times the amount of Bush II Administration (22,031).

What will transpire is 2019 is anyone’s guess.  On the plus side, pro-business policies have taken root and are producing good results.  On the negative side, the political divide in Washington is stalling growth.  The recent partial government shutdown must not be a 2019 harbinger of things to come.   Download, at no cost, this posting, other Year Ahead postings and Jobenomics economic, community, business, and workforce development documents in the Jobenomics Library.

In today’s highly-charged political environment, what people want to know is how today’s president is performing compared to past presidents.  As color-coded by political party, of the twelve presidents since WWII, President Trump’s average 201,083 monthly job creation rate places him in third-place following President’s Clinton (242,010) and Carter(218,646).  However, adjusting for population size (e.g., U.S. population during the Eisenhower Administration was almost half, 160 million, of today’s population of 329 million), President Trump would rank sixth following Carter, Clinton, Johnson, Nixon, and Reagan.

To some extent, comparing President Trump with President Eisenhower is an apples-to-oranges analogy.  The American economy, workforce, industry and technological state of affairs were markedly different in the 20th Century when compared with the 21st Century.  The following chart shows the job creation rate by year for America’s 21st Century presidents (Bush, Obama, and Trump) as reported by the U.S. Bureau of Labor Statistics (BLS) from data obtained by the U.S. Census Bureau’s Current Population Survey (CPS) of U.S. households.

Job Creation Scoreboard since 2001 by Year

The most highly-anticipated and widely-reported U.S. government statistic is the job creation number in the monthly BLS Employment Situation Summary news release.[1]  This single statistic not only drives policy-making but it is overly used by decision-makers and media-pundits to judge the health of the U.S. economy and the efficacy of the Executive Office of the federal government.  The following chart shows the historical monthly job creation rate by month that the BLS obtains from the Census Bureau’s Current Establishment Statistics (CES) survey of nonfarm business establishments.[2]

Job Creation Scoreboard since 2001 by Month

From an Administration standpoint,

To fulfill President Trump’s campaign promise of 25 million new jobs over the next decade, the Administration needs to generate 210,146 jobs per month in the remaining 96-months of this decade-long goal.  If the United States can maintain the job creation momentum achieved by the Trump Administration in 2018 (average of 219,833 new jobs per month), the next decade could produce more new jobs than any decade since the 1950s.  2019 will be a pivotal year to see if the Administration can maintain its momentum.  Given 2019’s rough start, robust job generation is facing intense political headwinds in the run-up to the 2020 Presidential elections.

While this presidential comparison is interesting, it is an unproductive way of interpreting the Job Creation Scoreboard statistics.  By comparing the current president to past presidents, decision-making is conducted by looking backward, or in naval parlance, by steering a ship by looking at its wake.  From a Jobenomics perspective, a better way to navigate forward is to establish the number of jobs needed to fulfill labor force requirements. To do so, the U.S. must create a reasonable job creation standard.

No standard should not be locked in concrete.  Labor force requirements and economic conditions often change drastically quickly.   2019 is likely to be a very turbulent year given the amount of technological, financial and social disruption that is happening globally.

Barring an economic downturn, successful resolution of the trade disputes and cooperation of the Democrat-lead House of Representatives, the Trump Administration’s upward mega-month trend is likely to continue in 2019 as a result of positive GDP growth (3.3% average in 2018 compared to a decade quarterly average of 2.4% and 1.9% in the year prior to the start of the Trump Administration).  Tax cuts and regulatory reforms should also motivate more job creation as American industry gains momentum in a more stable and business-friendly environment.  On the other hand, 1 January 2019 marked the start of the Democrat-controlled House of Representatives that has a very different set of priorities than the Administration.

To sum up, 2019 could be a record year for President Trump’s job creation prowess.  All the essential ingredients (tax reform, reduced regulation, new trade, and tariff agreements, etc.) are in place.  However, America’s political and social divide could upend the upward job creation trend.  The recent partial government shutdown debacle is a harbinger for continued political disruption that not only threatens government workers but the private sector workforce as well.

About Jobenomics.  Jobenomics concentrates on the economics of business and job creation.  The non-partisan Jobenomics National Grassroots Movement’s goal is to facilitate an environment that will create 20 million net new middle-class U.S. jobs within a decade.  The Movement has reached an estimated audience of 30 million people.  The Jobenomics website contains numerous books and material on how to mass-produce small business and jobs as well as valuable content on economic and industry trends.  For more information see Jobenomics.com.