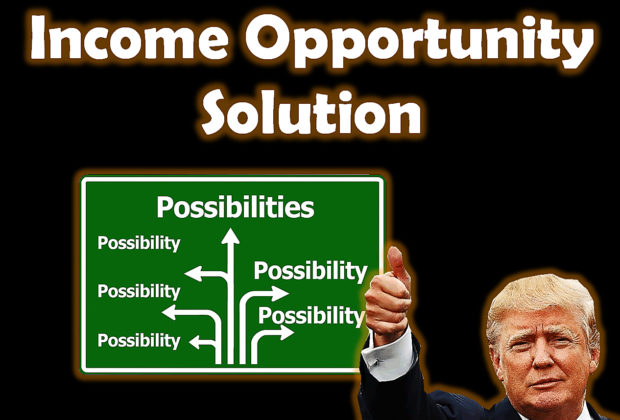 President Trump’s New Economy Challenge (Part 16 of 20).   As discussed in the previous article, the United States now has reached a point where only 14% (45 million) of Americans earn above average (mean) wages and 86% (274 million) of Americans report earnings below average or no wage at all.  No wonder why people are upset about income inequality.  The surest way to rectify U.S. wage and income inequalities is create income opportunities for willing souls who seek greater self-sufficiency and financial independence.  Income opportunity involves money that people can earn as opposed to money that they have.  The term opportunity implies favorable conditions or prospects in order to attain advancement or success.  Today, the American dream of upward mobility, fairness and optimism has been shaken in the wake of a Great Recession, chronically high unemployment and a stagnant economy.

A presentation by Assistant Treasury Secretary Jan Eberly at the 2012 Economic Measurement Seminar produced an insightful graphic on intergenerational socioeconomic mobility.  According to Eberly, higher education is critical for economic mobility.  Without a college degree, children born in the bottom income quintile have a 45% chance of remaining there as adults.  With a degree, they have a roughly equal chance of attaining each income quintile, which means an 80% chance of being in a higher income quintile than their parents.  While Jobenomics agrees, the educational paradigm required for yesteryear’s workforce development may not be appropriate for today’s labor pool.  More skills-based training and certification programs are needed.

The bifurcation of American society into haves and have-nots, skilled and unskilled, and hopefuls and the hopeless is a major educational and training challenge.  To those at the top of the American socioeconomic pyramid, the old paradigm of “get a degree to get a job and get a better degree to get a better job” is more important than ever.  To those at the bottom of the same pyramid, more workforce, technical and social skills training are needed to stem the increasing exodus to welfare and alternative lifestyles.  Getting a postsecondary associate or baccalaureate degree is a bridge too far for many living close to the poverty level, or for primary and secondary school underachievers.

While America has always been known as the “land of opportunity”, the Great Recession and chronically high unemployment has eroded socioeconomic mobility for those at the base of America’s economic pyramid.  A 2012 study by the Economic Mobility Project of the Pew Charitable Trusts states while “Eighty-four percent of Americans have higher family incomes than their parents did….Those born at the top and bottom of the income ladder are likely to stay there as adults.  More than 40 percent of Americans raised in the bottom quintile of the family income ladder remain stuck there as adults, and 70 percent remain below the middle.”

Jobenomics believes that high school dropout rates, especially in the inner cities, is symptomatic of a greater problem—the lack of income opportunity. Jobenomics is working with local leaders in a dozen inner city communities, all of whom say that high dropout rates are directly related to the lack of income opportunities and employment.  A recent Northwestern University study of a quarter-century of data reveals a persistent connection over time between unemployment and the occurrence of school shootings at K-12 and postsecondary schools across the entire United States. According to the study, “the link between education and work is central to our expectations about economic (income) opportunity and upward (income) mobility in America.”

Many Americans feel that Washington policy-makers can fix our problems.  Jobenomics disagrees for a number of reasons.  First, a slow growing economy as well as a deeply divided citizenry makes political consensus-building difficult.  Second, the biggest challenges for improving income opportunity are beyond Washington’s reach.  Thirdly, global competition in the digital age levels the playing field for six billion other people around the world who want income opportunity and are often more motivated to strive to get it.  While Washington has an important support role, it is up to the private sector to create businesses and jobs.

A McKinsey report entitled Restarting the US Small-Business Growth Engine accurately describes small business as the engine of US economic growth with emphasis on “high growth” small businesses.  The McKinsey article states that “a subset of small businesses—high-growth ones—creates the vast majority of new jobs.  Seventy-six percent of these high-growth firms are less than five years old.  The 1% of all firms that are growing most quickly (fewer than 60,000 in all) account for 40% of economy-wide net new job creation.”  The biggest challenge for the McKinsey model is picking winners. It is hard to identify the next generation serial entrepreneurs, like Bill Gates (Microsoft), Steve Case (AOL), Mark Zuckerberg (Facebook) and Meg Whitman (eBay).  Therefore, the McKinsey model focuses on small businesses that already have established themselves with potentially high growth products or services.  McKinsey also advocates big business and government assistance to help emerging businesses grow rapidly and mass produce jobs.

Some of the most dramatic American Dream success stories include immigrants who fled foreign oppression to seek income opportunity in America.  According to a 2011 report by the Partnership for a New American Economy, legal immigrants or their children founded more than 40% of U.S. Fortune 500 companies.  About 20% of the newest Fortune 500 companies founded between 1985 and 2010 have an immigrant founder.  Many of America’s greatest brands, Apple, Google, AT&T, Budweiser, Colgate, eBay, General Electric, IBM, and McDonald’s, owe their origin to a founder who was an immigrant or the child of an immigrant.  The Fortune 500 companies that boast immigrant or children-of-immigrant founders have combined revenues of $4.2 trillion.

In conclusion, for America to prosper, more focus needs to be placed on income opportunity (the solution) as opposed to income inequality (the problem).  Income opportunity leads to jobs, careers and new businesses, which in turn facilitates upward income mobility for individuals and their progeny.

Stay tuned for the next installment in the President Trump’s New Economy Challenge series entitled, “The Trump Administration’s Minimum Wage Conundrum” scheduled for release on 29 March 2017.