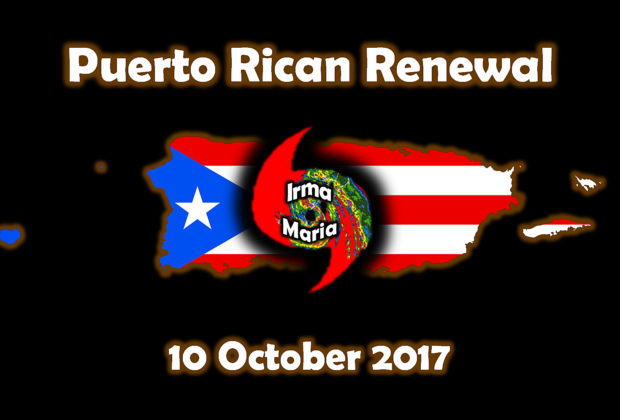 Don’t only restore but renew Puerto Rico.  Enacted by Congress and approved by President Wilson in 1917, the Jones–Shafroth Act made Puerto Ricans United States citizens.  If the United States can invest trillions of dollars transforming war-torn countries decimated by man-made calamities, America can surely afford to renew Puerto Rico to give hope to its citizens ravaged by recent natural disasters.  Devastation caused by Hurricanes Irma and Maria provides the United States a unique opportunity to transform this territory (as well as the U.S. Virgin Islands) not to its former marginalized status but to transform it into a modernized and sustainable economy.  Download 5-Page Article at Puerto Rican Renewal – 20 October 2017.

Far too often, good-hearted people focus on the early search/rescue, relief and recovery stages of the disaster recovery process but neglect the critically important latter phases of long-term recovery and community development.  A well-planned Puerto Rico Renewal Program would attract investment and talent necessary for long-term economic, community, business and workforce development for our despoiled Caribbean territories.  In regard to long-term recovery and community development, America’s focus should be on elevating the Puerto Rican economy to be more compatible with the U.S. national economy, or, at a minimum, making Puerto Rico the most competitive economy in the Caribbean.

In September, the U.S. Congress approved a $15.3 billion hurricane relief package.  In October 2017, the U.S. House of Representatives voted overwhelmingly (353 to 69) to approve $36.5 billion in additional emergency funding for hurricane and wildfire relief.  Much of this $51.8 billion funding is earmarked for first responders (including FEMA and tens of thousands of U.S. military personnel) during the initial phases of the disaster recovery process.  Much more money is likely to be needed for long-term recovery and community development.  Unlike Texas, Florida and California that have largely self-healing economies, Puerto Rico (as well as the U.S. Virgin Islands) is not as fortunate and will need long-term assistance that is outside the purview of first responders.

Failure to address Puerto Rico’s long-term and community development issues could lead to a mass-exodus and a brain-drain of potentially hundreds of thousands of Puerto Ricans to the United States, who would join the already large diaspora located mainly in the Northeast and Florida.  Even if this mass exodus was limited to only tens of thousands of people, the Puerto Rican economy, now over $123 billion in bond debt ($74B) and unfunded pension obligations ($49B), would suffer considerably and likely lead to bankruptcy.  In May 2017 Puerto Rico filed for a form of bankruptcy in federal court—the first time in American history for a U.S. territory or state.  Hurricanes Irma and Maria make the possibility of Puerto Rico’s financial insolvency and a humanitarian crisis even more acute.

Puerto Rico’s pre-Maria unemployment rate was 2.5-times higher than the U.S. national average and now is expected to soar to much higher levels of unemployment and lives of dependency on public assistance.  According to the U.S. Census Bureau, Puerto Rico’s pre-Maria median household income was one-third of the U.S. national average, or $19,350 compared to $53,889 respective.  The island’s poverty level is even worse, 43.5% compared to the stateside poverty level of 12.7%.  Consequently, restoring Puerto Rico to its pre-Maria standard would be shortsighted given America’s vast resources and regional interests.  Not only is the American public watching how Washington will deal with Puerto Rico’s immediate and future needs, so are Latin America and the rest of the world.  To put our nation in order, we must first put our family together with the greatest emphasis on our destitute.

It has been over 4-weeks since Hurricane Maria made landfall in Puerto Rico and the island is still in shambles. Jobenomics team members are on the ground in San Juan dealing with emergency relief and are urgently seeking support from the millions of followers of the Jobenomics National Grassroots Movement.  As reported by our lead team member, Pierre Laguerre, 90% of the islanders are still without power and 50% have no running water.  Almost the entire workforce of 1 million Puerto Ricans are paralyzed due to power outages and destruction of much of the island’s aging infrastructure.  Moody’ Analytics, a leading risk management and research firm, predicts that recovery operations from recent storms will take up to 3-years.  Should you be inclined to provide relief aid or support small business recovery, contact Pierre at http://www.PRReliefNow.com.

100,000 jobs in a 5-year period is an aggressive but achievable goal.  A good example of achieving such a goal involves Kansas City’s recent efforts to make Kansas City “the most entrepreneurial city in America”.  Led by KCSourceLink® and supported by leading private sector and government institutions, the Kansas City metropolitan area (a community two-thirds the population of Puerto Rico) has been able to quantify the economic impact of Kansas City startups in its latest report, We Create Jobs.  The jobs generated by Kansas City startups with fewer than 20 employees between 2012 and 2016 added up to a total of 84,011 new jobs, accounting for 65% of all new metropolitan area jobs and 7.7% of total city employment.  We Create Jobs breaks down jobs by industry and tracks wages—important metrics that help advance and further measure entrepreneurial efforts to increase entrepreneurial density, improve visibility of and access to resources, and build better pipelines for ideas and talent.

In a recent conversation, Dara Macan, SourceLink’s Global Director of Business Development, told this correspondent that the SourceLink team began working last year with the Puerto Rico Science, Technology & Research Trust to explore ways to implement SourceLink methodologies and lessons learned.  This collaboration culminated in Colmena66, a regional referral network which links Puerto Rico area entrepreneurs and business owners to over one hundred resource partners, such as nonprofit organizations, academia and government agencies that provide services to help businesses grow and prosper.  In addition, Colmena66 invests, facilitates and builds capacity to continually advance Puerto Rico’s economy and its citizens’ well-being through innovation-driven enterprises, science and technology and its industrial base.

A coordinated Puerto Rican Renew Program would build on innovative programs, like Colmena66, and integrate a multitude of other leading economic, community, business and workforce programs and organizations to transform America’s largest territory and San Juan, the oldest city (founded in 1521, 44-years earlier than St. Augustine, Florida—the oldest continuously occupied city in the continental United States).

Prior to Hurricanes Irma and Maria, Puerto Rico employed 680,000 people in 44,000 employer establishments.  Creating tens of thousands of new small and self-employed business to support long term recovery and community development operations should be relatively easy to accomplish if properly planned, supported by local community leaders, underwritten by the U.S. federal government, and financed by leading private sector institutions and corporations.

It is clearly in the scope of the U.S. federal government’s charter to create similar underwriting enterprises for long-term recovery and community development for our beleaguered island territories.  The funds generated from these underwriters would be used to reduce financial risk for private sector investments and programs.  Leading U.S. private sector organizations and corporations are already engaged in Puerto Rico’s long-term recovery and community development operations.

For example, the Federal Communications Commission granted Alphabet (formerly Google)-owned Project Loon an experimental license to deploy 30 aerostats (balloons) to regain Puerto Rico cellphone connectivity due to the destruction of most of the island’s cellphone towers.  Rather than just restoring telephone connectivity, policy-makers and the network technology giants (Alphabet, Apple, Microsoft, Amazon, Facebook) could establish high-speed broadband technology for every home and office on the island.  Building a state-of-the-art digital infrastructure, would enable development of a next-generation ecommerce economy for America’s Caribbean-based citizens.

Tesla provides another excellent example.  Once the storm passed, Tesla began sending hundred s of large solar-powered Powerwall batteries to help generate electricity for first responders, hospitals and government operations.  Much more could be done in this regard, especially if the United States helps Puerto Rico transition from its antiquated grid-based power generation system to a point-of-use next generation energy ecosystem.

Next generation ecosystems consist of renewable and clean energy power generation, net-zero buildings and communities (that satisfies energy needs from renewable, zero-emission sources), zero emission transportation systems (e.g., electric vehicles), sustainable communities (communities that are economically, eco-friendly, and socially healthy and resilient), and hurricane-resistant buildings.  As reported by the U.S. Energy Information Agency, 98% of Puerto Rico electrical power is generated by imported fossil fuels (47% petroleum, 34% natural gas and 17% coal).  Only 2% comes from point-of-use renewable energy generation.  By dramatically increasing renewable and cleaner energy power generation, the cost of the island’s electricity will drop from the highest in the United States to one of the lowest, thereby providing increased discretionary spending for citizens and lowering operating costs for businesses and government.

Jobs do not create jobs.  Businesses do—especially small businesses that employ 80% of all Americans.  Businesses exist to satisfy needs and initiatives.  Based on our extensive research, Jobenomics asserts that Puerto Rico is ideally suited for an integrated community (economic/business/workforce) development initiative focused on skills-based training and certification programs, and mass-producing startup businesses focused on filling the 6-million open U.S. jobs and exploiting the millions of new employment opportunities afforded by the emerging Energy Technology Revolution and Network Technology Revolution.  In this regard, Jobenomics publishes monthly employment and GDP reports, quarterly 160-page employment reports and quarterly 110-page unemployment reports that address fastest growing occupations, open and emerging opportunities, business and job creation initiatives at the base of the U.S. socioeconomic pyramid, as well as the reasons that more people depart the U.S. labor force than enter it.

A Jobenomics Puerto Rico Renewal Program would start with training, certifying and starting microbusinesses for the 3.4 million Puerto Ricans living on the island with a goal of creating jobs within months and careers within a year.  A well planned, supported and resourced Renewal Program would also attract a number of the skilled and entrepreneurial 5 million Puerto Ricans living stateside.  Such a program would be attractive to socially conscious and enterprising Spanish-speaking and Millennial Americans.  In other words, finding skilled and energetic talent to start new businesses and to fill employment opportunities from established businesses should not be a major challenge.

America not only has an obligation to alleviate our hurricane-related suffering citizens, but an economic opportunity afforded by concentrating on the long-term recovery and community development phases of the disaster recovery process.  From an integrated community (economic/business/workforce) development perspective, with proper leadership and support, America can lift tens of thousands of its Caribbean citizens out of poverty by:

If the United States can afford trillions of dollars to rebuild foreign nations suffering from the aftermath of war (e.g., Iraq and Afghanistan), America can surely afford the cost of incentives and underwriting of private sector business initiatives in Puerto Rico, and the U.S. Virgin Islands, that are suffering from the aftermath of Hurricanes Irma and Maria.  The time to develop and implement a coordinated Puerto Rican Renewal program is now not afford our island territories collapse in chaos.