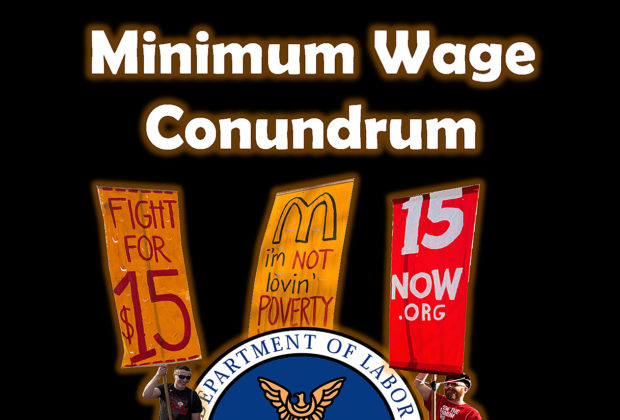 President Trump’s New Economy Challenge (Part 17 of 20).   Most people perceive that minimum wage laws apply mainly to the 4.7 million fast-food industry workers.  This perception understates the serious consequences of a universal minimum wage to all businesses, the labor force and the U.S. economy.  If a $15/hour minimum wage was implemented today nation-wide for all able-bodied Americans who can work, 159 million citizens would qualify for the minimum wage threshold according to U.S. Census Bureau wage and earnings data.  44 million Americans in the top 50 projected highest growth occupations listed in the Bureau of Labor Statistics’ Occupational Outlook Handbook would also need an hourly increase in pay of up to $6 per hour to meet the threshold.  According to the Handbook, even 22 out of the 36 (61%) top non-college degree occupations make below minimum wage.

In a Bloomberg interview with Mary Kay Henry, the President of the Service Employees International Union (SEIU, an organization of 2 million unionized service workers), Ms. Henry stated that a $15 minimum wage would be a boon to small businesses since workers would have more money in their pockets to spend.  Jobenomics agrees with this statement.  Jobenomics also agrees with SEIU’s recommendation to provide “job ladders and training” for low-wage earners to escape poverty.  Per Ms. Henry, “We now have 10 million workers on a path to $15 in New York and California.  It will be fascinating how transformative those dollars are to economic growth in those communities.”

Rather than instituting a universal minimum wage, Jobenomics prefers workforce incentives and supplements that would encourage citizens—115 million below average wage earners, 15 million unemployed and underemployed workers, 16 million new workforce entrants per year and 95 million sidelined adults capable of working but choose not to work —to join the U.S. labor force.  Incentives and supplements would include programs like a livable minimum wage in proportion to the local cost of living, temporary exemptions for internships, and a transition period to allow welfare recipients to keep a portion of their benefits as they transition to workfare.  In other words, rather than funding people not to work, subsidize them to work by providing ways to bridge the gap between low wages and livable wages.

Building welfare to workfare “bridges” is only the first step.  The next step involves building career paths (ladders) via certified training programs designed to quickly advance people up the initial steps of the ladder.  The final step is to mass-produce highly-scalable small businesses—the employer of the vast majority of Americans, low income wage earners, new workforce entrants and the formerly unemployed—to provide meaningful ownership and long-term career opportunities for those that start their journey at the bottom rung of the ladder.

Stay tuned for the next installment in the President Trump’s New Economy Challenge series entitled, “The Urban Renewal Imperative” scheduled for release on 1 April 2017.